Technically who even cares?

Not native French but I've been here since I was a kid (I'm English).

And yeah, I know French towns/roads/cities like the back of my hand & the Tour has (IMO) been on a sort of scenic detour for a few years now onto rural country roads which are not ideal for a peloton riding full speed into a sprint finish.

It could be for xyz reasons (economic, political or maybe just Prudhomme's obsession with finding road novelty where none is needed), but yesterday I knew that would end badly for a whole bunch of riders when the Eurosport commentators were talking about the turn onto narrow twisty roads for the final 18km.

I mean who the hell thinks that's a good idea with 180 riders jostling for position? Today's stage 4 could end the same way today looking at that profile (i.e. GC guys thrown into a crash lottery). As a spectator & cycling fan, I'm just sitting there waiting for the inevitable. IMO road planning needs to seriously take into consideration the nature of the stage, i.e. sprints = bunched peloton for final = speed = danger.

This country has loads & loads of wide roads (& straight boulevards in major cities). Ergo if it's a sprint stage, send the peloton onto the appropriate terrain.

I'm even thinking if these guys weren't wearing helmets, there's no way the ASO would create the stage profiles we're seeing.
Reactions: IndurainsTdF1994, Bolder, Cookster15 and 4 others
M

A boring stage with 6 pages or fewer on the thread might be appreciated by now...
Reactions: Sandisfan and RedheadDane

Armchair cyclist said:
A boring stage with 6 pages or fewer on the thread might be appreciated by now...
Click to expand...

Sprint teams have a plan to get rid of some more GC riders.
Reactions: IndurainsTdF1994

Hopefully more crashes and Sagan rides through the mele to win on the back wheel.

Think he really wanted to bollock him lol
C

Haha, yep! "We would love to say nice things to you but there is nothing to say".
Reactions: thiscocks

At this point the only smart bet is on Lachlan Morton finishing the Tour.
Reactions: hscoach2, Barnacle Bill and thiscocks

Any chance of wind today or is this going to be as boring as it looks?
Reactions: Sandisfan
C

racing only the last 100 kms will only create more crashes lol
Reactions: IndurainsTdF1994

I don't know how Ewan wasn't Horner's target for bonehead of the day. Multiple stage wins on offer and instead he gets greedy and takes himself out at the first opportunity trying to do I'm not sure what.
Reactions: Sandisfan and thiscocks

Aleast we might se Gilbert go for some sprints although probably no ideal finishes for him.
M

Lequack said:
At this point the only smart bet is on Lachlan Morton finishing the Tour.
Click to expand...

After Lappartient's comments a small speculation on Lachlan's time on Stage 4 being quicker than the peleton could succeed.

The pet snake of Froome

Surely after the uci comments we will see some sort of a riders protest today?
Reactions: Sandisfan

Thats a lot of talking for a silent drive

Roglic, half man, half road rash 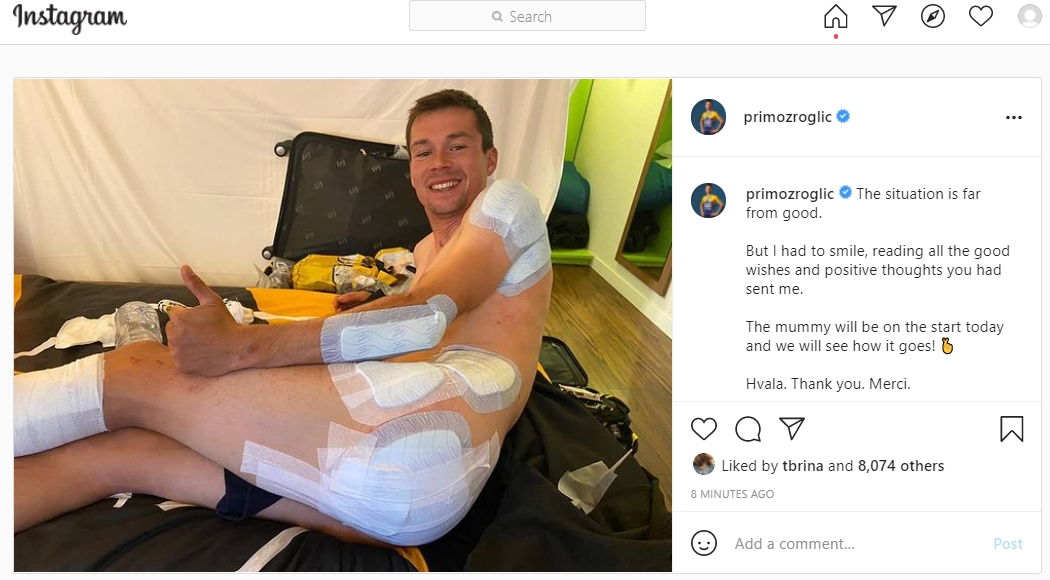 Man, all those scabs forming, over the next few days, constantly cracking whenever he moves

He is going to be in a lot of pain, not least on the TT tomorrow.
Reactions: Sandisfan and Lequack

Hardman to go out there again today with a smile on his face!
Reactions: Sandisfan, Rollthedice, Cassirer and 1 other person

I imagine Colbrelli didn't give him a like.
Reactions: Sandisfan, IndurainsTdF1994, spalco and 1 other person

Ewan out is just terrible for Lotto.

No schadenfreude here, but I DID say when they selected their team, that it was risky to go all in for bunch sprints.