staubsauger said:
Contador who might've lost the 2008 Vuelta a Espana against his teammate Leipheimer if he hadn't counter attacked Valverde on Angliru!

Leipheimer who was in the shape of his career at that years Vuelta, but still.

Then you have the likes of Simoni & Cunego, that where nowhere in their Vuelta gc attempts. Which can't be solely explained with the weak level of the Giro d'Italia during that era.
Click to expand... 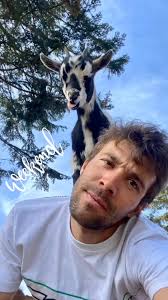 Did anyone else mistake the goat for a giraffe at first glance?
Reactions: carolina and Sandisfan

I voted for Jai Hindley, since I kept voting for other riders in the Giro polls. This probably rules Hindley out for the win, now.
Reactions: Sandisfan

I hate it when weak parcours like this one might prove the small silly sprints and TTT significant at the end.