Sidebar Sidebar
Previous Next
B

Now the fun can really start 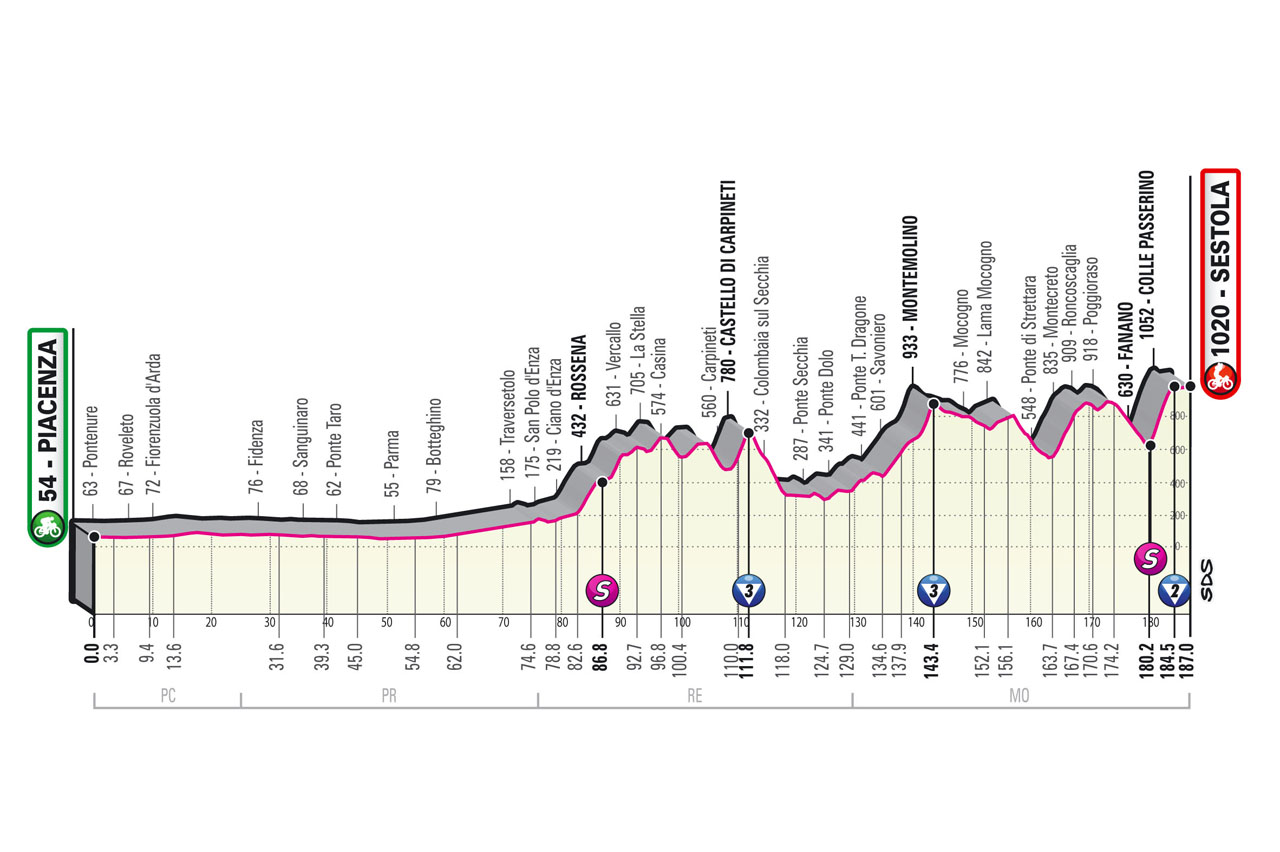 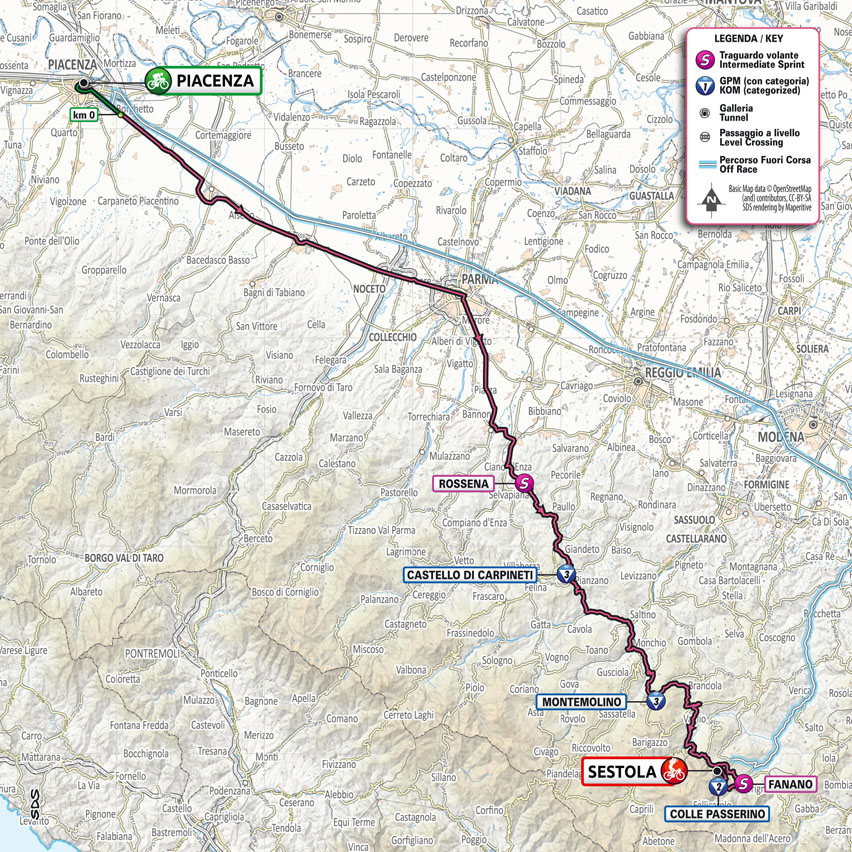 A very demanding medium mountain stage with likely GC implications. Starting from Piacenza, the riders will head south-east, initially following the Via Emilia until Parma and then heading into the Appennines. After a total of 77 km of flat at the start, the terrain becomes rougher, with a gentle ascent to the intermediate sprint of Canossa, which gives way to a series of small climbs and descents culminating with the first categorized climb of the day, Castello di Carpineti (GPM3, 3.5 km at 8.6%). This is a very steep wall, and will definitely wear some legs down, but it is too far from the finish and too isolated to see any action. Its pretty complicated descent will bring the peloton to 26 km of ascending false flat, followed by the second climb of the day, Montemolino (GPM3, 8.6 km at 5.7%), that features another very steep wall (1.95 km at 11.6%) that this time is closer to the finish, topping at 44 km to go. At the top there is a plateau of 13 km and then a descent of 7 km. At 24 km to go another climb starts, uncategorized: Montecreto (3.7 km at 7.8%), which tops at 20 km to go. At the top there is another plateau of 7 km and a descent of 6 km that ends at the second intermediate sprint of Fanano. There, the riders will face the final climb of the day, which is also the hardest one. Colle Passerino (GPM2, 4.3 km at 9.9%) a very hard climb that might see the first skirmishes for the GC. The top is at 2.5 km to the finish line in Sestola, all on rough terrain. 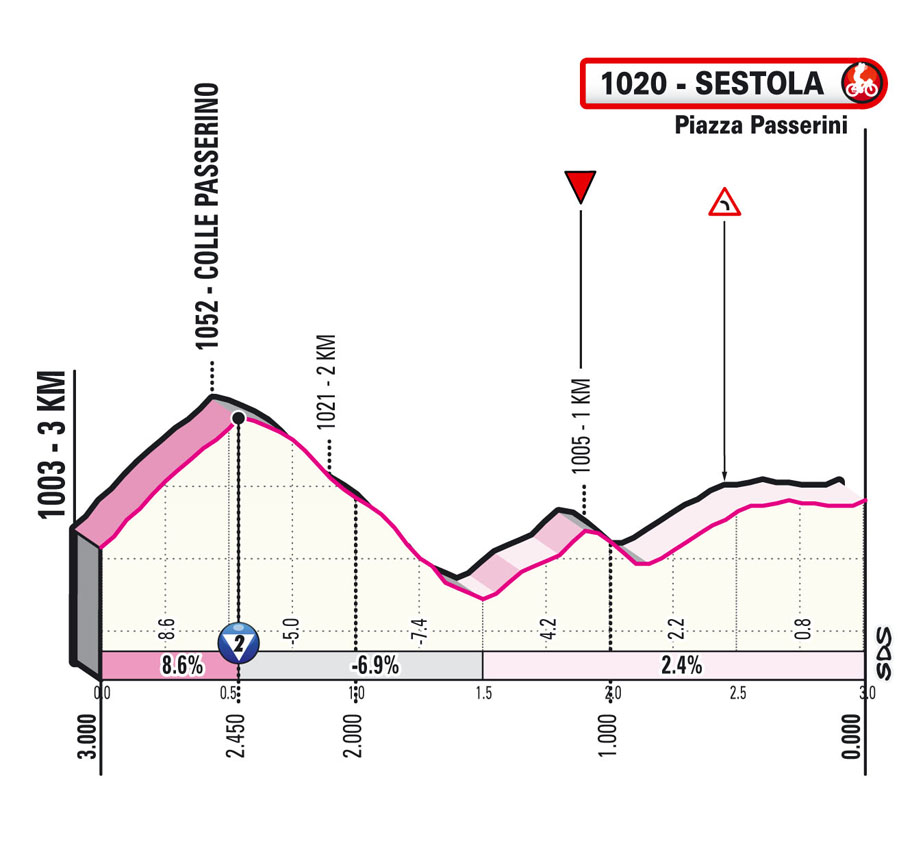 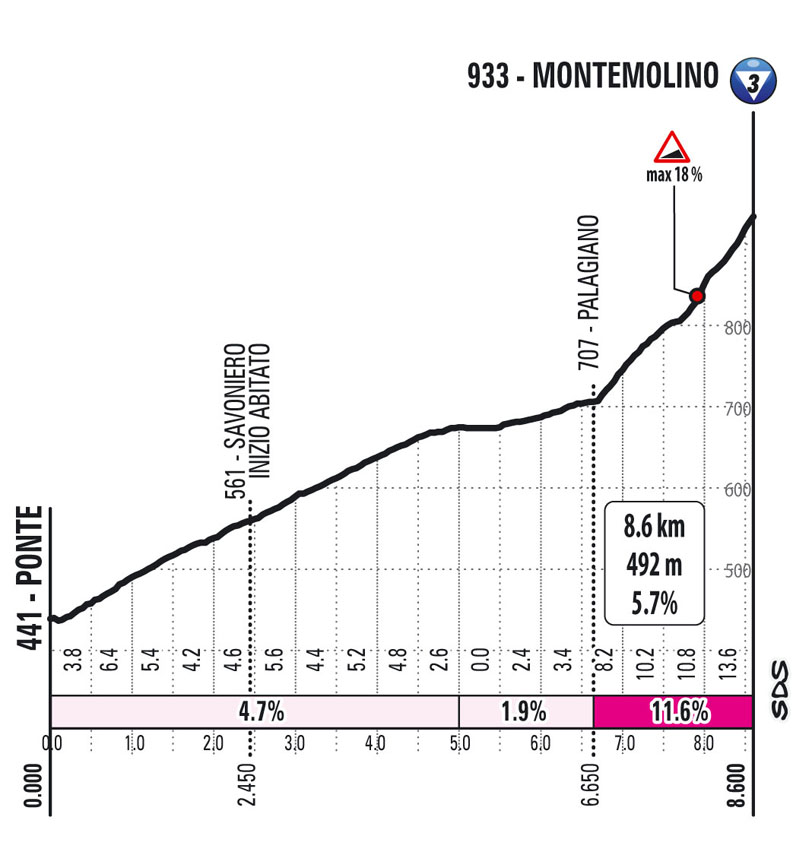 The first serious ascent of this Giro, short but really steep, especially in the middle. The road can actually bring even higher, eventually reaching the Passo del Lupo, climbed in 2014 (but not using this road). 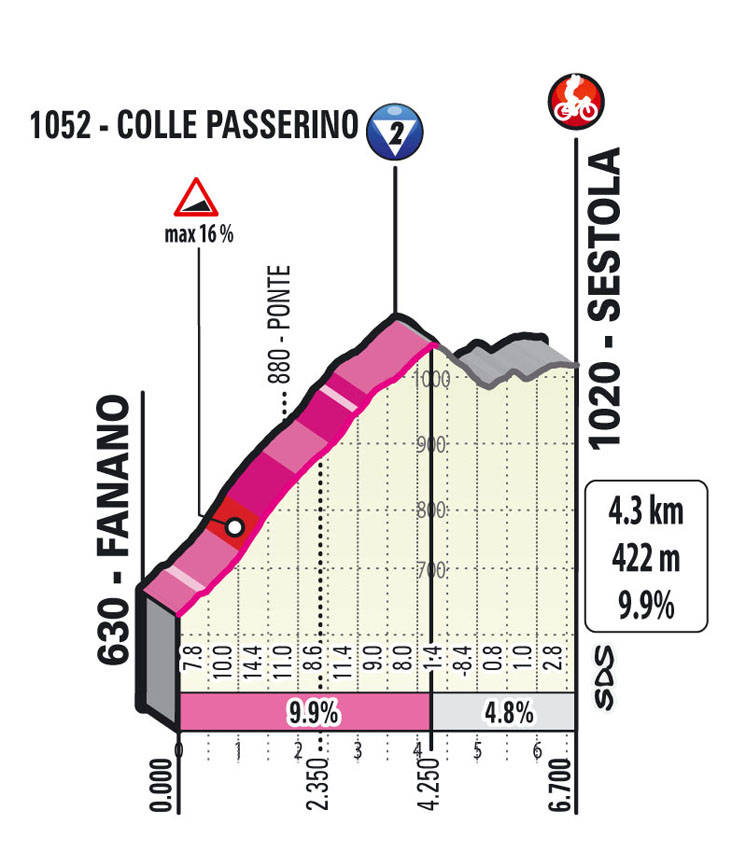 The final climb is definitely enough for GC guys to attack each other. Gaps should not be large but the stage has very good potential. With the GC still wide open breakaways might also be a problem to keep in check. 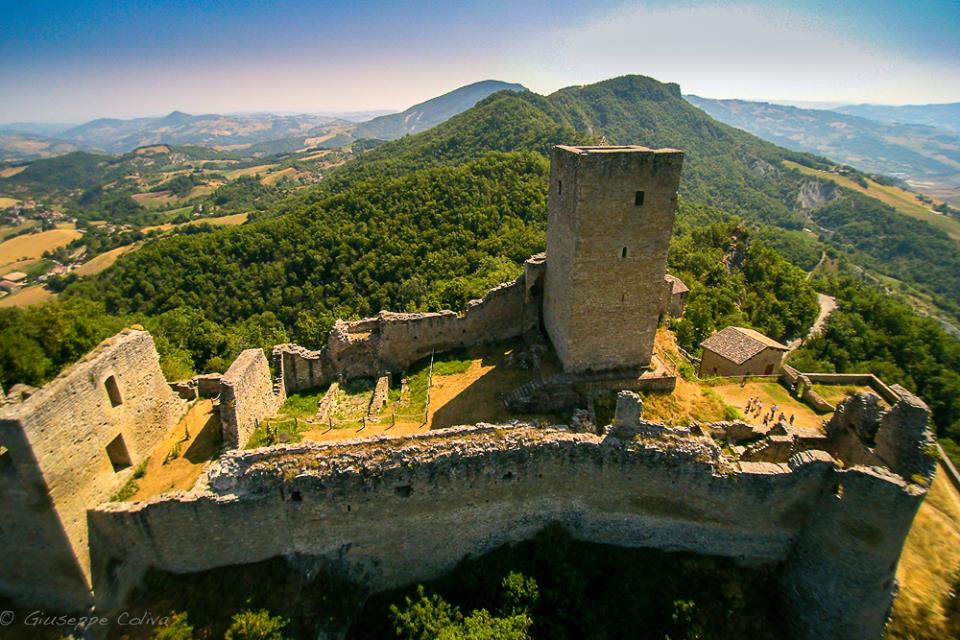 Ganna to hold on to pink.
Edit: Okay nevermind that final climb is more difficult than I first thought. Would be a very strong performance if he can manage it.
Last edited: May 9, 2021

How technical is the run in to the final climb?

Hopefully the stage that will give us answers to some of the biggest questions we are currently having. Although stages 6 and 9 are probably looking more frightening on paper I think that this will be the most important stage of the first week and I can see pretty big time gaps between gc guys happening. This might be were they are able to kill off Evenepoel (and to a lesser extent Nibali) before they can develop into actual threats for the third week. Then again Evenepoel might turn out to be back to his best already and win this by 2 minutes after an attack on the penultimate climb.
Reactions: gregrowlerson

Wait, what day is it today? Did I skip a day or is stage 3 cancelled...I'm confused
Reactions: RedheadDane

johnymax said:
Wait, what day is it today? Did I skip a day or is stage 3 cancelled...I'm confused
Click to expand...

Stage 3 thread is up as well.
Reactions: johnymax and RedheadDane

Screecher said:
Stage 3 thread is up as well.
Click to expand...

In fact already up with the stickied.
Reactions: Sandisfan

Hard to look past Evenepoel here. Yates is probably his largest rival.

I would say Yates and Landa will do well here.

Evenepoel is an unknown, but that will be a continued theme throughout this race as we already know.
Reactions: Big Doopie

How come? There are some elite climbers in this race.
Reactions: Carols and Big Doopie
T

I'm expecting Yates if there are attacks or Almeida if they all look at each other.
Reactions: Big Doopie

Rollthedice said:
How come? There are some elite climbers in this race.
Click to expand...

There are, and I expect Evenepoel to be one of the best of those, and I think that the stage suits him well.

johnymax said:
Wait, what day is it today? Did I skip a day or is stage 3 cancelled...I'm confused
Click to expand...

Stages 2 and 3 are bypassed (except by the clinically dead forum members). Onto Stage 4 a day early and really build it up cause a gc man might lose all of 10 seconds here. Can't wait, myself.

Might as well the Stage 16 thread!!!!
It will probably be more fun since we don't know who will be there racing!!
Reactions: spalco
B

i think we find out more about remco. if he stays with top dogs, it would be a good step, assuming he has more room for improving the further the race goes...
Reactions: Cookster15 and spalco
C

Red Rick said:
How technical is the run in to the final climb?
Click to expand...

There is a very technical part from 4 km to 2 km before the climb with 6 hairpins and 4 90° corners. Then it gets easier. But there is a last not to tight hairpin 600m before the climb: hairpin. After that it is relatively straight into a tight 90° right-hand corner into the climb (which is not that steep in the beginning): corner into the climb. The sprint is 200 meter after the corner.
Reactions: postmanhat, Poursuivant and Rollthedice

I believe this stage has potential to be very good, especially if it rains. But I'm not sure any team is confident enough to make it hard from far. It looks good for Pello Bilbao.
Reactions: victorschipolrijk
B

topcat said:
Stages 2 and 3 are bypassed (except by the clinically dead forum members). Onto Stage 4 a day early and really build it up cause a gc man might lose all of 10 seconds here. Can't wait, myself.
Click to expand...

Some GC contenders would lose more than 10-15 seconds on a climb 1/3 this long and that steep. Especially early on.
Reactions: topcat

I feel like from now on, in this forum, Evenepoel will win every stage.
Reactions: Sandisfan, victorschipolrijk, HelloDolly and 2 others

Escarabajo said:
I feel like from now on, in this forum, Evenepoel will win every stage.
Click to expand...

At least he's actually participating this time.
Reactions: Sandisfan, Hihope, postmanhat and 4 others

The profile promises more than that to Canale.
Similar make-up plot-wise.

Weather could be very bad tomorrow.
I think a few GC guys will lose time, possibly a lot of time.

Martinelly just said to RAI he thinks it will be very tough.
Reactions: Sandisfan

No sprinters this time. It will be a small group contesting at the finish line.
Reactions: Velolover2