The CERATIZIT Challenge by La Vuelta 21 will take off from the Province of Ourense on the 2nd of September and will cover the region of Galicia for the first time ever in its history. The race, one of the most important in the women’s WorldTour calendar, continues to make its mark and will be adding a new stage to its route this year, bringing the total competition days to four.

The race will be broadcast, but the schedule overlaps the men's version.
Reactions: Kaptain Kool

I was in the middle of doing research for my own thread, but now I will just hijack yours, Sir

After having been held in and around Madrid for the first six editions; initally as a one-day race (2015-17), then with a TTT and a RR (2018), then with an ITT and a RR (2019) and finally with two road stages with an ITT in between in 2020, this year's edition will take place in the Wild West region of Galicia, where the final stages of the men's Vuelta will also be held.

The race has three road stages and a MTT on day 2, which will probably be pretty decisive for the final outcome.
The rest of the course is no picnic though, so some exciting racing could be in store. It will probably also be one of the last times we'll get to see Annemiek van Vleuten and Anna van der Breggen go head to head. 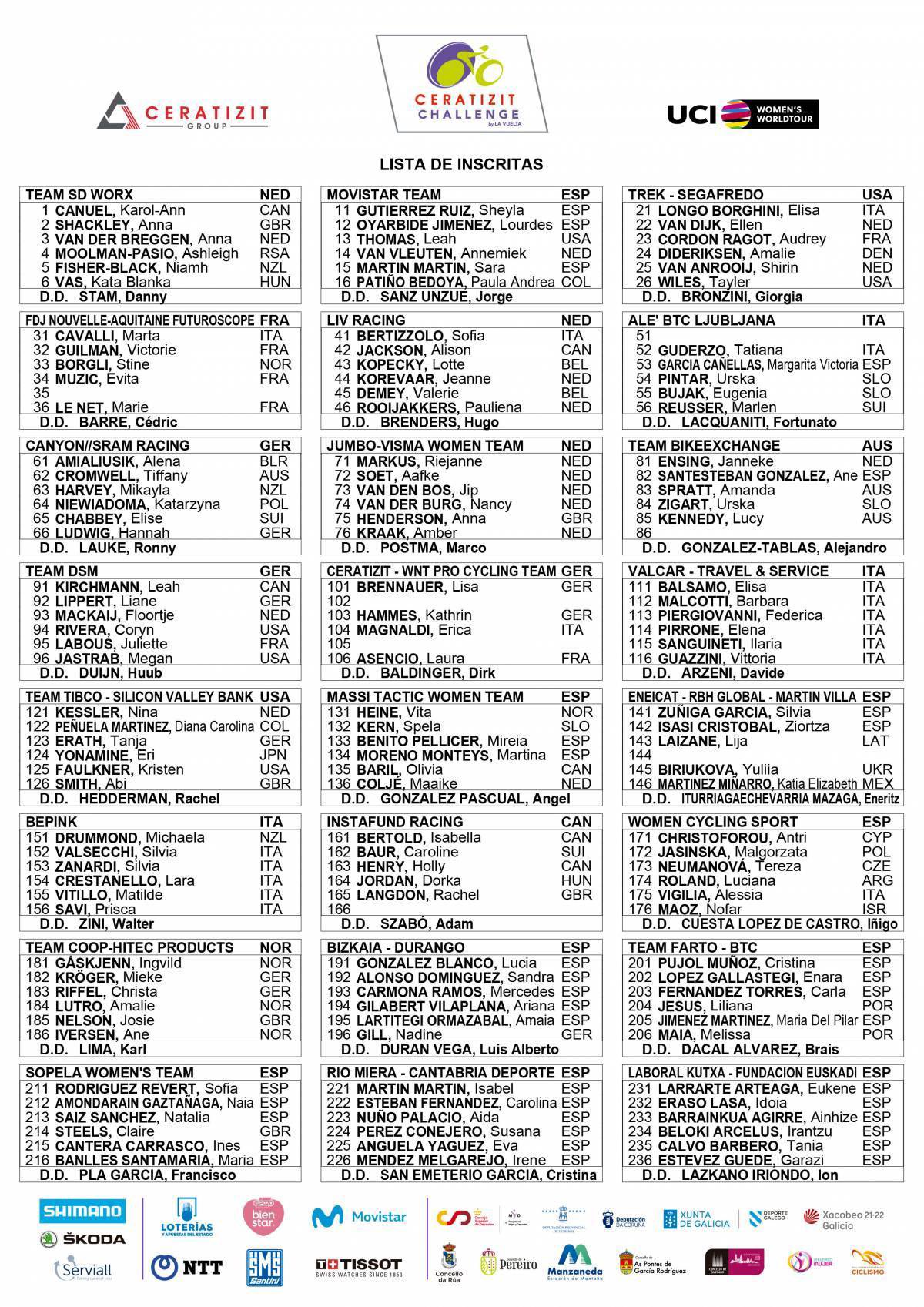 Be my guest, Samu.

Not that I've planned but, should've mentioned it in the Thread planning... either of us.

Stages 1, 2 and 4 all look like they would be more interesting in reverse.

Now having looked at the profile for stage 4 more closely I feel less bad about gambling on Balsamo in the prediction game. I was debating whether she'd make it to the finish with the gang on stage 3 because she can climb pretty well for a sprinter, but these are long climbs.

Stage 1 starts with the descent from the Manzaneda ski station down to A Pobra de Trives. Hopefully there won't be any crashes. Then they will begin the first climb of the day; the Alto da Ermida (6.1 km, 4.1%). Not a difficult ascent at all, but it will presumably be where we'll see the first attempts to form a breakaway. The descent is a bit longer, but pretty easy.

Then the riders will continue heading East and cross the finish line in A Rúa for the first time, then they'll ride through the town of Vilamartín de Valdeorras before they reach O Barco de Valdeorras, where they'll face the longest and only categorised climb of the day; the Alto da Portela (14.5 km, 5.4%).

Following a short descent comes the next small climb. According to the LFR profile it's just under 2 km long with an approximately 3% avg. gradient. Not long after it they will turn left in the outskirts of Prada onto a narrower road, where the next climb begins.
I haven't found a name for it, but it is about 2.7 km long with some short parts at possibly more than 8%. It also includes a descent, so the avg. gradient isn't noteworthy, but the riders probably have to stay attentive here if they want to have a chance to win.

A stretch of ups and downs follows with a final descent into the town of A Veiga, where the road widens again. Now awaits the final longer climb; the Alto de Covela/Pico de San Bernabé. The Alto de Covela has been used in the Vuelta before, but not from this side. They have instead used the road from Petín, which will act as the final descent on this stage. The climb is approximately the first 10 km of the profile underneath. It doesn't look that hard, but the road seems to offer up some good opportunties for attacking, though some of the tougher sections will be evened out by short descents leading into them. 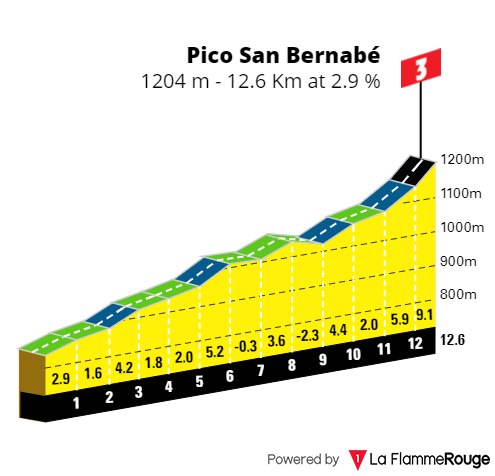 When the riders reach the top, it's then mostly descending for the remaining 24 km. It doesn't look awfully difficult.
There seems to be a 40-50% chance of rain in the area, though, which of course might shake things up. The outcome of the stage will obviously also depend on how many and which riders will have made the final selection at this point.

She hasn't performed greatly on the bike this season, but Amanda Spratt has achieved something recently; mainly visiting one of the prettiest locations in Denmark, but also getting some kind of official business over with

First three stages look great, 4th a big meh (in theory fine but why as the last)?

Very annoying that the women's WT so often fails to add an interesting MTF.

A strong breakaway with Reusser, Chabbey, Rooijakkers, Kennedy and Magnaldi has 1:15 on the peloton close to the top of Alto da Portela. Coryn Rivera or a Trek rider is only 15 seconds behind.
Van der Breggen is pacing the peloton.
Last edited: Sep 2, 2021

Reusser, Rivera, Chabbey and Rooijakkers have 2 minutes with 27.5 to go. I'm betting on them to make it now.
Reactions: sir fly

Samu Cuenca said:
A strong breakaway with Reusser, Chabbey, Rooijakkers, Kennedy and Magnaldi has 1:15 on the peloton close to the top of Alto da Portela. Coryn Rivera or a Trek rider is only 15 seconds behind.
Van der Breggen is pacing the peloton.
Click to expand...

I literally considered all of those bar Rooijakkers as stage huntresses. And actually, Pauliena is probably my favourite rider of the 5, but she's a total Moncoutié - great climber, hates pélotons, and can be found on the back or hanging off the back of every péloton she meets.

Seems the quartet will start tomorrow's tt with useful gaps.

I can't really understand why Movistar, SD Worx and Trek allowed Reusser to go in that break. She's tall and she's wearing the Suisse colours, so they definitely knew who it was. She did finish fourth on Norefjell in the Tour of Norway, although they only went full gas on the final few kilometers, but considering how good a TTer she is, it could prove hard to take back more than a minute on her, though we did see in the Giro that huge differences can be made in a MTT.

But now Reusser is tired of doing most of the work, which will help the peloton.
Reactions: yaco

And now Reusser goes on her own, and Rooijakkers and Chabbey are looking at Rivera, who doesn't respond.

Rivera playing the "I'm a sprinter" card, Rooijakkers and Chabbey playing the "we know you are" card.
Reactions: BlueRoads

Not a too big inclination of tomorrow's course, and Reusser in great shape lately while the usual suspects are on the return after a short break after the Olympics.
Gonna be a fight for the overall.

Reusser has put herself into the frame for GC - She does a decent ITT then she's the favourite for the GC.

Valcar finally got a WWT bunch sprint leadout right, but Balsamo had to settle for 5th; 1:45 or 48 behind Reusser.


Libertine Seguros said:
Rivera playing the "I'm a sprinter" card, Rooijakkers and Chabbey playing the "we know you are" card.
Click to expand...

With the form she has at the moment, I think she should just have fully commited to it there, unless she knew she didn't have it anyway. Chabbey isn't slow in a sprint, but a rider like Rivera should have anough confidence in her own abilities.


Reusser looks like Vino did after his crashes in the 2007 Tour de France, but we know that didn't slow him down on the ITT, so hopefully it won't bother her too much tomorrow either.


On the MTT they will be riding on the stretch of road between km 18.5 and 26 on the profile below.

Spratt must have enjoyed her wedding - Finishing 8 minutes down on this kind of stage.

yaco said:
Spratt must have enjoyed her wedding - Finishing 8 minutes down on this kind of stage.
Click to expand...

You can't really blame her, can you?
Kennedy getting dropped from the breakway wasn't great for BEX either.

Also a bad day for Ceratizit-WNT with Magnaldi who wasn't able to stay out front either, and Brennauer apparently coming back from a cold and losing 13 minutes. And on top of that they also had to start the race with only four riders.

So Zigart pogacars the time trial and the German commentators talk about her partner Primoz Roglic
Reactions: Samu Cuenca

My suspicion following Plouay has been proved right; Van der Breggen isn't on good form right now.
She finished around 50 seconds slower than Leah Thomas, who's currently in the lead.