I know that the calender got changed around and that the race starts of the day of the ME WC, but la Grandissima needs a thread.
The route:

The route is shorter than usual, but the classic MTFs on Torre are still happening.

The startlist: https://www.procyclingstats.com/race/volta-a-portugal/2020/stage-10/startlist
W52/FC Porto still looks like the team to beat, last years winner Joao Rodrigues and former Winner Veloso. No Alarcon, but Rui Vinas and a returning Amaro Antunes.
Efapel managed to sign Antonio Carvalho, who used to ride for W52 and finished 4th last year. With him and Joni Brandao they bring a strong team, with WT veterans like Tiago Machado and Pauliho.
Tavira are bringing Frederico Figueiredo, who just won the GP Torres Vedras and the well know veteran Marque. Other than that you have to usual suspects like Henrique Casimiro and Vincente Garcia de Mateos (who almost won the Spanish NC).
No idea what Rally cycling is doing here, Delko is bringing mainly stagehunters and sprinters like most of the other PCT teams.
I'm sure someone with more knowlege of the Portugese cycling scene like LS will be able to expand a bit on my rudimentary description of the startlist.

With the race only happening now and not durning the usual August heatwave the temperatures should be more normal and less extreme. That should lead to even higher climbing performances (you can't allow Pogi to steal your thunder).
Anyway, let's hope for an exciting race that is fun to watch. 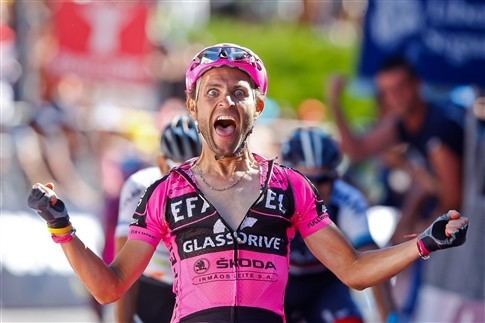 Why is Ze Gonçalves not riding?

Well, Alarcón is on the naughty step for being too thermonuclear even for Portugal, which I'm sure you'll agree deserves a special award, possibly named for Francesco de Bonis. The prize comes with a complementary contract with Törku-Seker Spor.

I am also very scared that the reduction in race days will be kept going forward to save money, and that would be a travesty, turning the mighty Volta a Portugal into just a week-race. It needs to be the longest non-GT race on the European calendar, to extend the fun. We all know the Volta is the guilt-free purgative you take to flush out the Tour.

Small startlist this year as you might expect what with being coterminous with the Worlds, but intriguingly five ProConti lineups which is an improvement on usual. No cannon fodder Dutch or Belgian classics teams to tweet about how ridiculous the speed is, sadly, as that's often one of the more fun things about the race, débutantes for teams unsuited to the event who feel they know what they're getting themselves in for but find that it's so much more brutal even than they expected. So, it's basically 10 Portuguese teams (9 pro and 1 national) and 5 ProConti teams.

As ever, expect the winner to come from the former. There's very little we can use as a form guide so it could be even more open season than usual; we have had the GP Torres Vedras-Troféu Joaquim Agostinho as ever, but it was just 2 days long this year. I think W52 will be hard to beat, with João Rodrigues and Amaro Antunes the most likely to lead, as Gustavo César Veloso is now 40, although in the universe inhabited by the Volta, that is just coming out of peak years, so you never know. Vinhas is a former winner too of course, but his win was a bit of an anomaly borne out of a long break and then performing above and beyond his usual level to hold on, a bit like if Isidro Nozal's fairytale had actually come off. For the most part though I would say that Mayo has done a good job of picking out the likely leaders - I would expect García de Mateos to be the protected rider for Loulé with Jesús del Pino as lieutenant and Sergey Shilov stagehunting; Efapel will provide strong opposition with Joni Brandão, César Fonte, Luis Mendonça, Sérgio Paulinho and Tiago Machado all lining upm with the former two likely to be their GC men, depending on how motivated Tiago is. Joaquim Silva was once a big hope, now riding on Miranda-Mortágua, while Radio Popular may have lost Rui Sousa, but they're keeping their shade quotient high, with former dopers João Benta and Alberto Gallego their leaders. For Kelly-InOutBuild, Luis Gomes just finished on the podium in Torres Vedras.

As ever, no real strong estrangeiro teams, and Arkea's team in particular is basically made up of some odds-and-ends riders that didn't make the Tour squad rather than having clear intent for either sprints, or GC, or stage wins. Plenty of potential interest though. Delko have former Volta podium rider Délio Fernández, while for Rally both Gavin Mannion and Keegan Swirbul just finished top 10 in the Trofeu Joaquim Agostinho. Burgos' team is probably among the strongest they can ice, but they aren't an especially strong ProConti team. That said, Ricardo Vilela ought to be motivated on home roads, and this is key Vuelta preparation for them; Ángel Madrazo will at least bring cult appeal and entertainment value. For Caja Rural I'm interested in how Orluís Aular gets on as he had a really great 2019, and for Nippo there's also Mauro Finetto, who is the kind of rider the 'sprints' of the Volta a Portugal will definitely suit.

Pacing of the race sucks with the weekend stages being very poor, however. How can it truly be the Volta without arriving in Mondim de Basto on a Sunday afternoon with the entire town out to greet it?
Reactions: Zinoviev Letter, bob.a.feet, carolina and 1 other person

FYI, this is NOT the 82nd edition, because the usual company that owns the rights for the race refused to organize it. This is being organized by the portuguese cycling federation. It was named Volta a Portugal 2020 - Edição Especial.

The 82nd edition will be next year.


Billie said:
Why is Ze Gonçalves not riding?
Click to expand...

That's a question for the Clinic I heard there were some problems, but nothing has come out yet.
Reactions: bob.a.feet, Kaptain Kool, yaco and 1 other person

No... he's not in the race... silly.
Reactions: GenericBoonenFan, Sandisfan and perico

I have to say that's a really nice prologue.
Edit: Rodrigues riding up nearly all of that 10% ramp while staying in his TT position.
Veloso wins the prologue, Reis 2nd, Brandao only 7 sec down, while almost taking a wrong turn, having to hit the breaks and accelerate again, he's looking strong.
Last edited: Sep 27, 2020
B

LMAO at Veloso winning the prologue.

Btw, what is Alarcon's status? Is the still injured due to his crash last year, or is he blacklisted?
Reactions: Sandisfan and perico

Amaro loosing so much (32 seconds) was a bit of a surprise.
The Senhora da Graça MTF will show us more on tuesday.
Reactions: Sandisfan
B

That photo really scared me.
Reactions: Sandisfan
B

Bonimenier said:
That photo really scared me.
Click to expand...

One has to love Rui Sousa if you enjoy watching Volta.

Oh it's that time of the year already, Samuel Caldeira dragging people around Portugal...
For the certainly big lot of you that love toponomy, the peloton is just going through Covide.
Marvin Scheulen alone at the front, no one else even bothered.
Reactions: Sandisfan and SafeBet

Veloso bringing bottles to his teammates while being in the leaders jersey, clearly he isn't one of their main options for the gc.

So many great climbs around this area and so few of them in the Volta...
Reactions: Sandisfan, SafeBet and trevim

It's nice to watch the official feed, I'm trying to learn a bit of Portuguese because my cousin's wife is from Brazil. Maybe I'll learn enough to do what Spanish and Italian people usually do, the Spanish use the few Italian words that they know, the Italians the other way around and in the end they are able to understand eachother at least somewhat decent.

Libertine Seguros said:
So many great climbs around this area and so few of them in the Volta...
Click to expand...

That's so true, it would be great if they went over Serra de Arga near Ponte de Lima or Val de Poldros with a descent finish to Melgaço. Or my personal favourite, the cobbled climb to Serra Amarela (Ermida) near Ponte da Barca...

Luis Gomes wins the stage anhead of Dani Mestre and Veloso, 3 W52 guys in the top 5, Finetto 8th and the best PCT guy.

Watching Há Volta before the race is always a WTF moment for me, and I grew up with Italian trash TV...

"Há Volta" is only for the finest tastes

Today there's the MTF at Senhora da Graça with the relatively new approach from Marão and then into Alvão before the final descent into Mondim de Basto.
Ricardo Mestre on the break so it'll be interesting if they stay away in terms of W52 leadership.
Reactions: Sandisfan

Don't worry, you're not alone. At least you don't understand them
Reactions: Sandisfan

Joni Brandao at the back of the bunch, looks like he has a problem with his bike.
Reactions: Sandisfan

Mayomaniac said:
Joni Brandao at the back of the bunch, looks like he has a problem with his bike.
Click to expand...

Yet his team keeps pulling, both in the break and in the peloton. It never gets old with portuguese teams DS's.
Reactions: Sandisfan

trevim said:
Yet his team keeps pulling, both in the break and in the peloton. It never gets old with portuguese teams DS's.
Click to expand...