Page 453 - Get up to date with the latest news, scores & standings from the Cycling News Community.
Sidebar Sidebar
Next

And in 2018, Ster didn't run, and Quick Step skipped the Tour of Belgium. It's true Ster returned this year (we should have mentioned that in the California thread), though Belgium had to move in the calendar to safeguard that participation, and Ster had to move to a different part of the Netherlands that took away the at least potentially interesting stages they had around Limburg and Verviers. That's with two Hammer Series events (there were three in 2018, but Hong Kong was very remote from the rest of the calendar in mid-October; Stavanger and Limburg are the two that are mid-season so to speak), and actively trying to place them in an amenable calendar spot to minimise disruption so that they can establish themselves in a spot to the level where they can't be removed like a cyst. They wanted ten. If they were all peripheral like Hong Kong, and they got to be like the post-Tour crits but actually competitive, and everybody could have their end-of-season fun with some short, sharp race days, like the Race of Champions or the Moscow stadium biathlon or the Pro Bowl, then that would be one thing, but trying to find space for ten of these mid-season?

It's just another marketing ploy designed by lobbyists to push to marketing execs to try to create some more justification for Vaughters' franchise plans to shut the door behind himself because he's scared that others might squeeze him out by growing their teams in exactly the same way he's done (notwithstanding the UCI really doesn't need any help in killing ProContinental, it's doing a fine enough job of that on its own). The branding would be cringe-making enough in its own right, without that branding being used to promote something that tries to break down something that, at its heart and core, is an endurance sport, into bite-sized chunks because older generations have got it into their head that the current generation - despite being the generation of binge-watching - is too stupid to be drawn into something without alarms blaring and action sequences every ten minutes. It's Jonathan Vaughters indulging his Bernie Ecclestone fantasies, and it's Michael Bay cycling.
Last edited: Nov 12, 2019

Vuelta a Valencia disappeared from the calendar back around the time of the world wide economic disaster. It recently returned with new organizers. The Vuelta a Murcia was reduced from a week long stage race to a 1 day event to hope to continue due to that same economic disaster. They are just now trying to add stages back to it. Races disappear for many reasons.
N

Actually that are very rare cases, the crisis between last and this decade has literally decimated the medium/minor races in Spain, and it's not an isolate case, if you look at the 2000 calendar comparing it with recent ones there are many, many, many races that have gone in Belgium, France, Italy, not to mention Deutschland where (in that case with the help of their reaction to clinic issues) the pro calendar has almost been totally erased.

Just so we're clear; the Ster ZLM Toer was cancelled last year because host cities pulled out.
Belgium Tour was moved a bit this year, but races get moved about all the time.
Why get your panties in a knot every time someone dares implement something that's new and different? Cykling can't all be 200+ KM marathons… it's like food! Traditional dishes are all good, but so is trying something new every now and then. And if you don't like the new - or don't even want to try it - just let others enjoy it and don't act as if the new dishes will somehow erase the traditional ones. 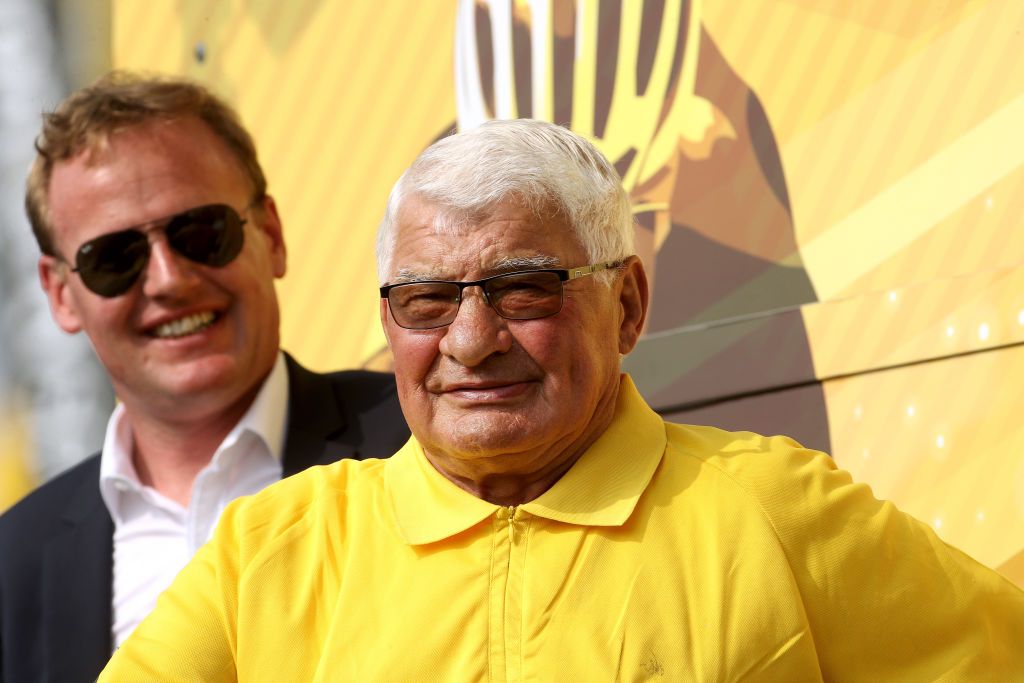 French cycling icon passes away after long spell in hospital

Adriano Malori has written a book about his challenges after his San Luis crash.
Reactions: Koronin

RedheadDane said:
Adriano Malori has written a book about his challenges after his San Luis crash.
Click to expand...


Approx. translation: Up again : a champ fighting against destiny.

Might just be me, but it says something about what a *** year 2016 was that I keep forgetting about his accident. Like "Oh, yeah… he almost died too!"
B

Gasparotto is now Swiss. He is no longer Italian. Apparently Switzerland can select him for the Olympics and/or the Worlds, however unfeasible that may be.

Just read that the Poggio is likely out for MSR next year due to landslides
Reactions: Sandisfan
L

jaylew said:
Just read that the Poggio is likely out for MSR next year due to landslides
Click to expand...

Cue every sprinter in the peloton going on 7 hour training rides for the next 4 months.
Reactions: Koronin

jaylew said:
Just read that the Poggio is likely out for MSR next year due to landslides
Click to expand...

Wonder if this is why Alaphilippe is planning on skipping MSR next season.
N

There are dozens of landslides all along the Aurelia, they could even end up with an harder route if they still have to avoid some next spring (for example when the Altopiano delle Manie was added was to avoid a landslide on the Aurelia).
T

Sagan will still want to win msr surely? It’s the one thing missing from his pal-mares?

Thomson said:
Sagan will still want to win msr surely? It’s the one thing missing from his pal-mares?
Click to expand...

Strade and Amstel are also lacking. And Omloop but he will probably not race that again.

Finally! There will be no team time trial in next year's Tirreno-Adriatico.

The route of the 2020 edition of Tirreno-Adriatico has been unveiled.

The good news: No more TTT, just the final ITT.
The bad news: The big MTF is back, this time it's Sassotetto.

Looks like RCS accepted the vox populi in regard to the time trials.
Returned to the proper summit finish, as well.
I don't doubt the race will attract a competitive field, provide excitement and serve others' purposes.
Both, last season's and next year's, concepts carry their own charm, peculiarities and opportunities.
Personally, I'd start altering the starting point along the entire coast (since the finishing, San Benedetto del Tronto, is kind of tradition). That way the race's concept could alter by itself depending on the piece of the peninsula they're crossing. Also, the place of the time trial could be shifted in the same spirit.
There are probably organizational reasons for sticking to Lido di Camaiore lately.
Reactions: Red Rick

Two stages where they've actively put in a completely flat finishing circuit unnecessarily, when they could have omitted it and had a reasonable stage, and only one proper Tirreno-Adriatico stage out of seven (stage 5). It's like they decided to get people excited by the lack of TTT, then did their utmost to dampen that excitement by making the rest of the course worse than most recent editions.

Still, at least no TTT.
Reactions: Sandisfan and Red Rick

in fact，Giro has no TTT，so there's no neccessary for set TTT in 2020's Tirreno-Adriatico
Reactions: Sandisfan

youyoumexin said:
in fact，Giro has no TTT，so there's no neccessary for set TTT in 2020's Tirreno-Adriatico
Click to expand...

It's not only about the Giro, the Tour also doesn't have a TTT, so you won't attract a better gc field by putting one in your stage race.
Reactions: Red Rick

Replacing the TTT is great. I don't mind Sassosseto, it's not a climb that decides the entirety of the race. I think Terminillo is too big for TA for example.

Or it wouldn't, if the other hilly stages weren't so disappointing.

No TTT is always a bonus but T-A doesn't even need a MTF if the hilly stages are hard enough. This year was almost an epic edition. Stage 4 and 5 gave us some of the best action seen in ages.

But you need Redoute-tier climbs (and a lot of them!) not a few bumps masked as a hilly route.
Reactions: Red Rick
S

tobydawq said:
Strade and Amstel are also lacking. And Omloop but he will probably not race that again.

Can't wait to see how Sagan does this year with altered programme
Recently quoted as going to Omloop definitely. KBK and Flanders still to be decided, though listed as starting at Flanders.
You must log in or register to reply here.
Share:
Facebook Twitter Reddit Tumblr WhatsApp Email Link