Wat guys we're 2 stages ahead with stage threads all Giro but Montalcino has to wait? Confine Gigs to a box with no TV or stream access. 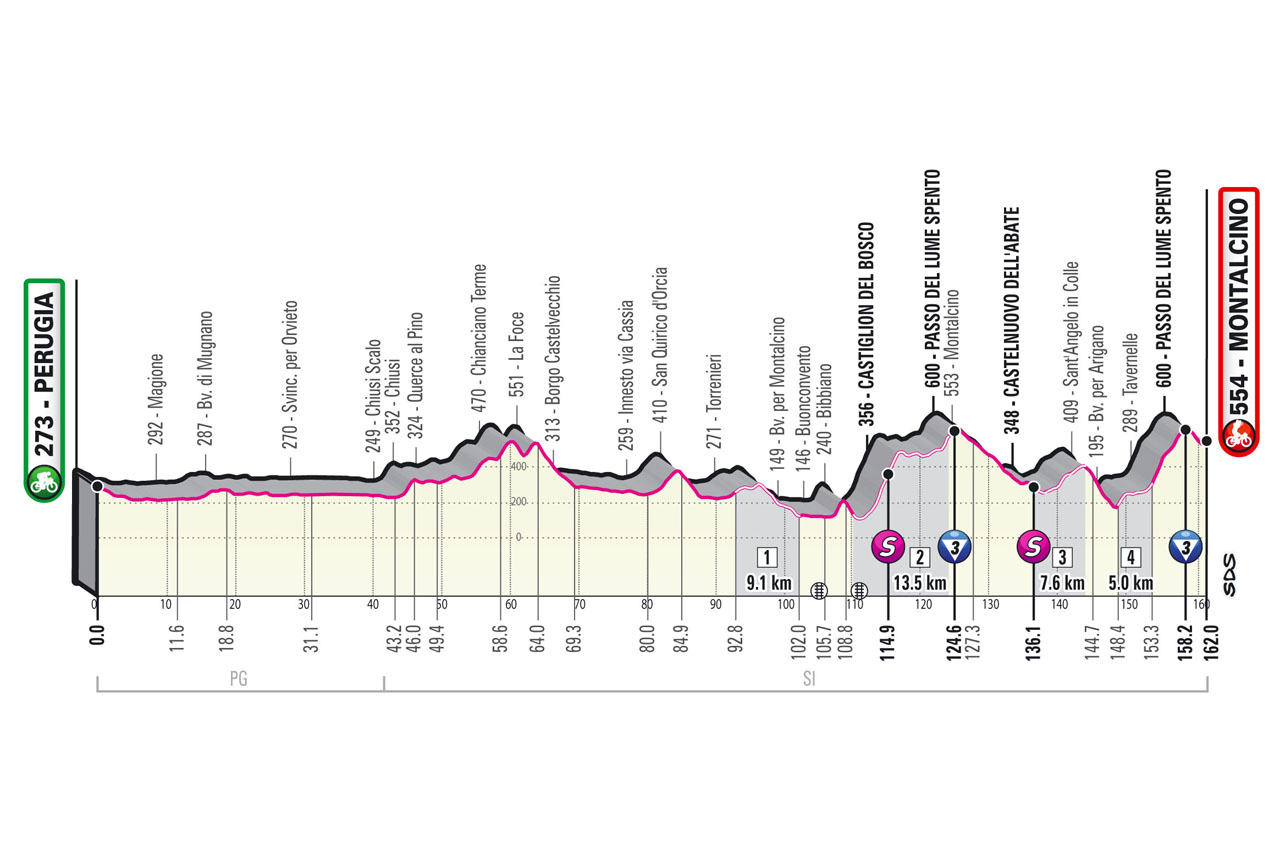 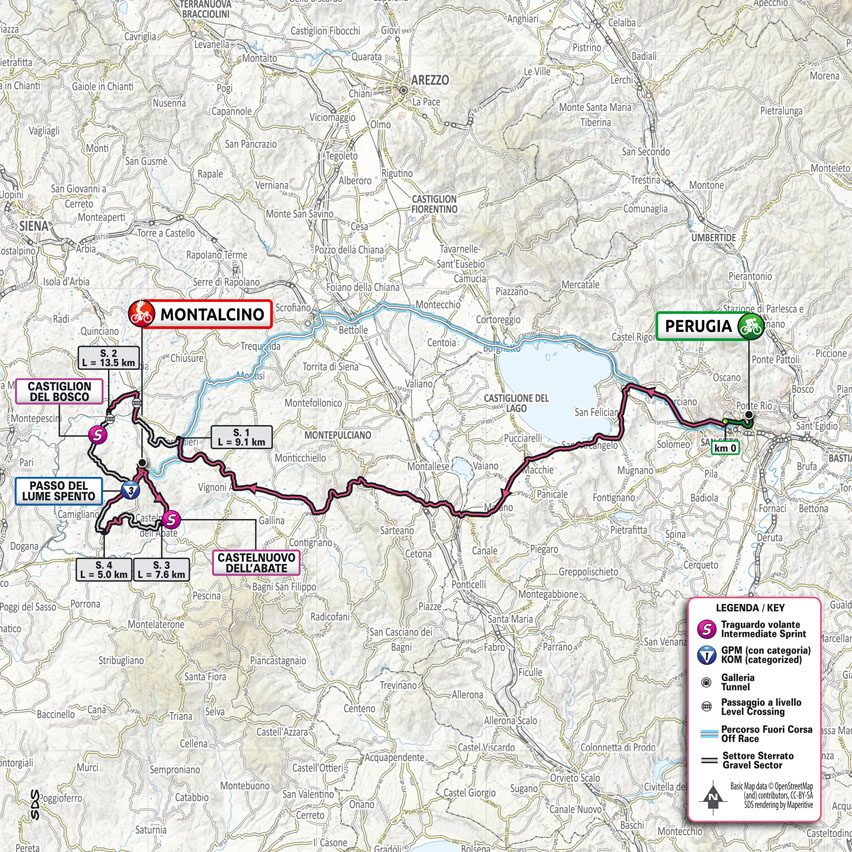 The Giro comes back to Montalcino and its white roads, 11 years after one of the most iconic stages of all times, that contributed to put the Strade Bianche on the map for many casual spectators. Many things have changed since then, and the Giro has shied away from proposing a proper sterrato stage since 2011. Finally, we are back, and I am pleased to report that this stage is significantly tougher than the 2010 one (weather notwithstanding), albeit a bit too short. The stage starts in Perugia and heads west to the shore of the Trasimeno lake, which the riders hit and leave on their right side along wide and flat roads, a rather uneventful section of 43 km. After reaching the town of Chiusi, the road will become much more irregular, going through some demanding terrain that does not however include any notable climb, until the peloton hits the village of Torrenieri, already in Montalcino’s territory. From here on, the riders will face a total of 35.2 km of white roads, quite a lot more than in 2010 (when they were 19.5). The first sector starting in Torrenieri, at 69 km to go, is 9.1 km long and features a slightly ascending first half and a slightly more descending second half. Here the gradient (both positive and negative) will rarely reach just 5%, but the peloton will still be at full strength, so positioning will be crucial and things might get spicy. At the end of the sector there is an 8 km stretch of asphalt that includes a small uncategorized climb, Bibbiano (1.2 km at 7.8%). Here we are already on the same route of the 2010 stage, which included a different first sector that led to this same stretch. Now the road will follow that route to reach sector 2, Castiglione del Bosco, the most important one, which starts at 53.2 km to go. It is 13.5 km long, starts with a 2 km descent (with a pretty steep first km) and then ramps up to the Passo del Lume Spento (GPM3, 13 km at 3.6%). This was called Poggio Civitella in 2010, but this year they have placed the GPM at a slightly higher altitude (600m vs 585m), which I guess is enough of a reason to use a different name. The climb starts with a 5 km section at 7% average featuring some very steep ramps (max 15%), all on sterrato with the exception of 800m of tarmac in the middle at the intermediate sprint. After this section the road flattens and becomes a plateau of 6.1 km, again on sterrato, before a final tarmac ramp of 1 km brings the peloton to the GPM, which lies at 37.4 km to go. Of these, the first three are spent to reach Montalcino, but the riders will not enter the town and go to the finish line (like they did in 2010), but instead will descend further towards the second intermediate sprint of Castelnuovo dell’Abate, for a total of 11.5 km of a very fast and fairly simple descent. Here, at 26 km to go, sector 3 starts. 7.5 km long, it has a first part of 4.3 km flat and easy, before a 1 km ramp at 7% and 2.2 km of slightly ascending false flat. It is of course nowhere near as hard as sector 2, but it should still do significant damage. It ends at about 16 km to go, leading to a 3.7 km descent on a wide road. Finally, at 13.6 km to go, sector 4 starts. It is only 5 km long, it begins with 600 m of flattish terrain, a 1.2 km ramp at 8.1% and then flattens out for the remaining 3.2 km. It ends at 8.6 km to go, but the fun is not over yet: the riders still have to face another climb to Passo del Lume Spento (GPM3, 9.3 km at 4.6%), this time on full tarmac - the official numbers also include the sterrato section, while the tarmac road is 4.8 km at 6.5%, including 2 km at 9.1%. The top is at 3.8 km to go, first descending and then traversing the narrow streets of Montalcino, with the finish on a steep ramp, same as in 2010. 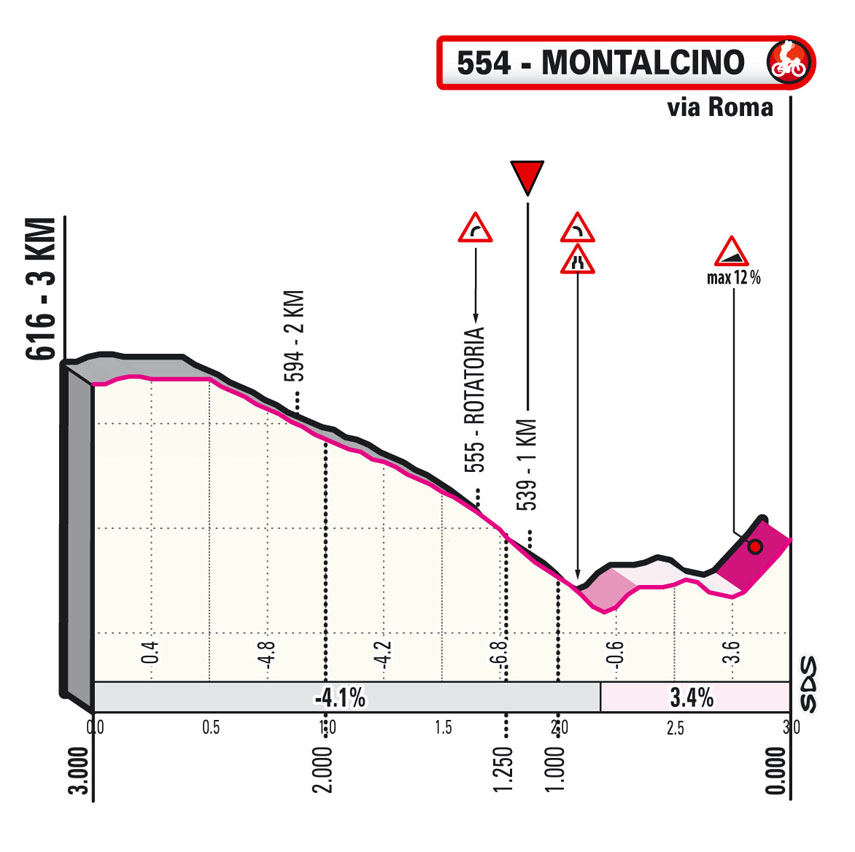 Risen to fame in 2010 with the name of Poggio Civitella, this beautiful climb features almost no tarmac at all, with a very steep first section and a long plateau at the top, before a final 900m ramp on tarmac to reach the top. The Passo del Lume Spento technically refers to a pass a few hundred meters off the road they are taking. Its name (literally “Pass of the Waned Light”) is apparently due to the strong wind at the top, that in the old days would often kill the lamps of the passing carriages. 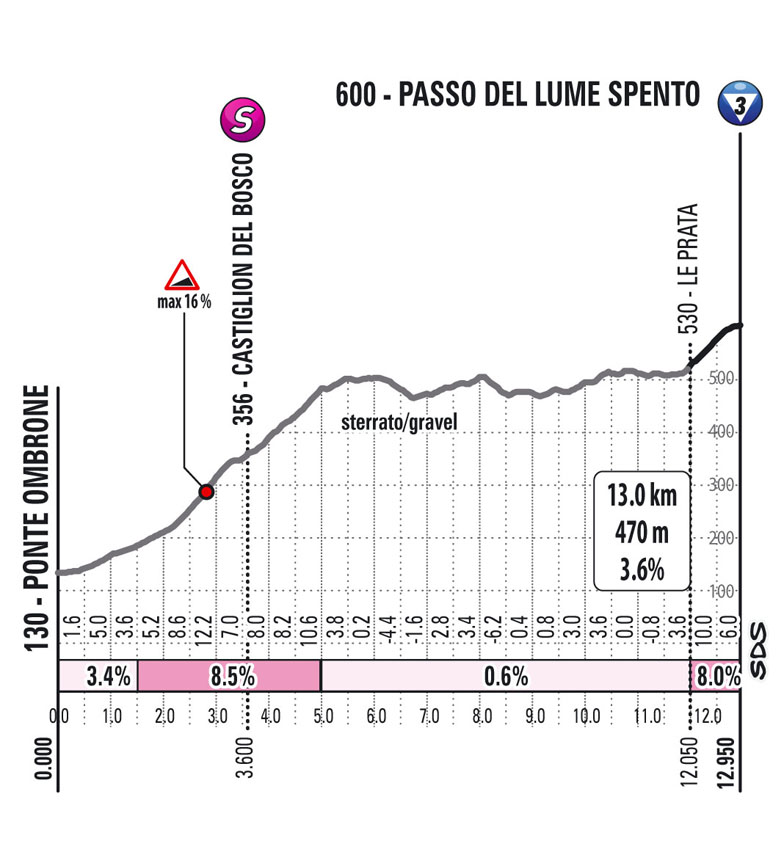 The second climb to the pass, this time from south instead of from north-west, does have a lot more tarmac. The sterrato section has a very short climb followed by flat, while the second half is on tarmac and features a steep ramp followed by some irregular terrain before connecting to the other side and climbing the same final stretch to the pass. 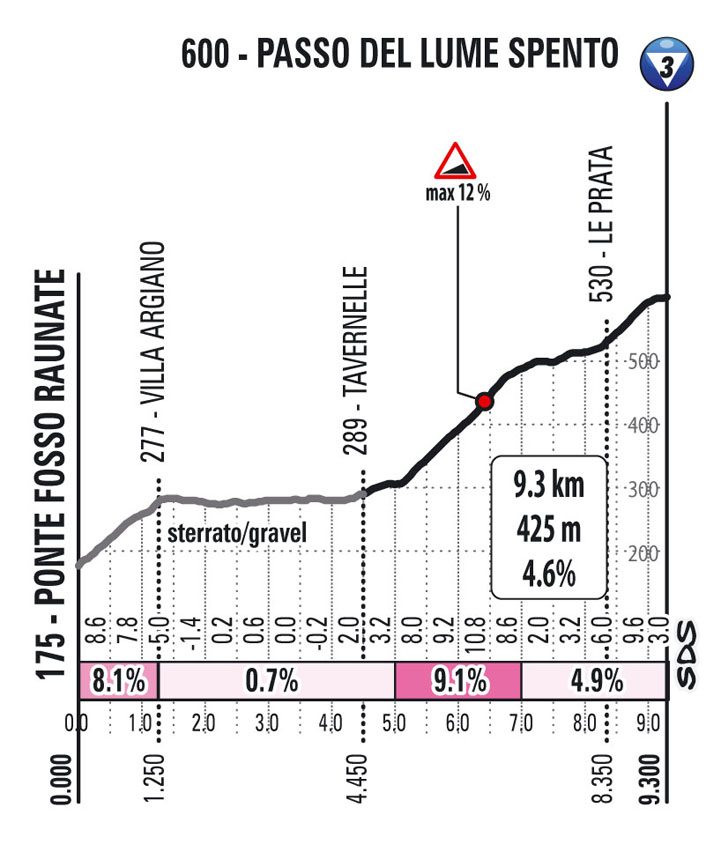 This might very well the defining stage of this Giro. If it rains it will be a massacre, but even with good weather the potential is enormous. The peloton will be shattered by the first two sectors, and from there on we will have to see if the strongest guys want to force the issue. Luckily there are a few GC guys who have demonstrated to be very good on this kind of roads, so they should really exploit this opportunity. But even if there is no will to fight, mechanicals, crashes and whatnot might still make the race blow up. 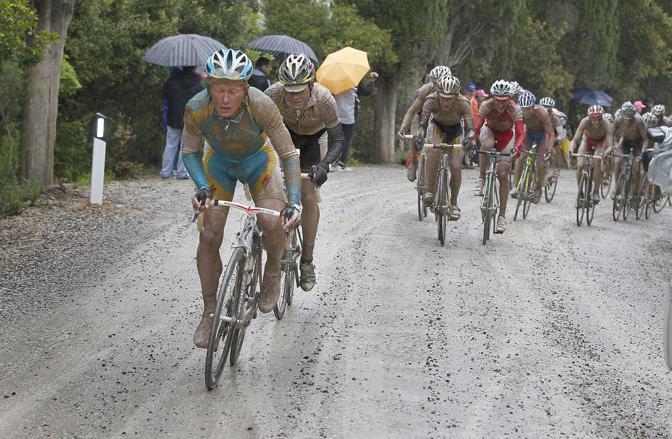 I was just about to make a thread. But you guys would probably have complained about my titleling.
Reactions: FekiZagreb, SHAD0W93, Sandisfan and 4 others
B

I kept getting errors when trying to post it. Luckily our savior Red Rick is here.
Reactions: Sandisfan and RedheadDane

I think Moscon will have a good chance of winning this, Bernal will need help to do big damage to the other GC riders and Moscon is probably most suited Ineos rider. Not sure what they will do if Martinez starts struggling.
Reactions: Sandisfan

RedheadDane said:
I was just about to make a thread. But you guys would probably have complained about my titleling.
Click to expand...

I think "stage" should be capitalised in the title.
Reactions: Sandisfan

Red Rick said:
Wat guys we're 2 stages ahead with stage threads all Giro but Montalcino has to wait? Confine Gigs to a box with no TV or stream access.
Click to expand...

About bloody time. I thought the forum had crashed with the delay.
A stage for the ages. It's Bardet time.
Reactions: dercuforever, Sandisfan, hayneplane and 4 others

Bonimenier said:
I kept getting errors when trying to post it. Luckily our savior Red Rick is here.
Click to expand...

Imagine if the three of us had managed to make threads at the same time.
And then tomorrow Toby might have made a thread...
Reactions: Sandisfan, Sciatic, Bonimenier and 1 other person
S

Reactions: movingtarget, hfer07 and Lui98
B

For all those talk about the thread titles: I think we're in the year 2021?
Reactions: Sandisfan, Fantastico, Lui98 and 4 others

There goes the hype

Oh next time I make a thread I want it to have a cool header like this! How do I do this?
Reactions: Sandisfan

I love how meta the polls have gotten.
Reactions: Sandisfan

Berflamand said:
For all those talk about the thread titles: I think we're in the year 2021?
Click to expand...

And that for the one stage that might be so legendary that people will try to find the thread many years later to look back only to not find it because the year is wrong.
Reactions: Andy262, Sandisfan and spalco

Watch Ciccone take the maglia rosa like the sprightly gecko he is
Reactions: Sandisfan

(But something missing, huh...?)
Reactions: gregrowlerson and Sandisfan
J

I'm glad there won't be rain purely because rain so far has meant no live coverage for some reason.
Reactions: Sandisfan, Eeslliw and Poursuivant

Even in dry weather, the route should easily be hard enough for a big day if anyone wants to put the hammer down...
Reactions: Sandisfan

Berflamand said:
And that for the one stage that might be so legendary that people will try to find the thread many years later to look back only to not find it because the year is wrong.
Click to expand...

Really looking forward to this. Here's hoping it gets raced in the right way
Reactions: Sandisfan