Page 45 - Get up to date with the latest news, scores & standings from the Cycling News Community.
Sidebar Sidebar
Previous Next

Richeze is such an overpowered leadout in this field. Two from two for Molano.
Reactions: Sandisfan
F

GPS all over the place...

Looked like Kooij in Croatia.
Reactions: Sandisfan and Devil's Elbow

Things are coming back together in Belgium.

Valgren has tried to bridge from the peloton on the final ascent of Croix Jubaru and has almost caught the front group. Bouhanni, who was dropped on the climb, is there too but the peloton is closing in with Deceuninck pulling.

Jakobsen, and some others, snuck off from the peloton.
Reactions: Sandisfan

The Jakobsen and Valgren groups have merged. Small gaps all around, inside the final 5k.
Reactions: Sandisfan

Front group seems to have given up.

Jakobsen is in front now, the rest of the peloton haven't made the catch yet and won't have time to position even if they do. Flamme rouge.

Jakobsen it is, ahead of Meeus.
Reactions: Sandisfan

Pedersen was left at the front way too early there, but Jakobsen was too strong anyway.
Reactions: RedheadDane

Samu Cuenca said:
Pedersen was left at the front way too early there, but Jakobsen was too strong anyway.
Click to expand...

Pedersen fading did mean Meeus had no space to get around Jakobsen though. Would have been close otherwise.
Reactions: Sandisfan, Samu Cuenca and BlueRoads

Jakobsen really good, he had to lose a bit of tempo but then he accelerated again, but so did Meeus who was just worse positioned.
Reactions: Sandisfan
C

Jordi Meeus necks his glass of Kwaremont in one go on the podium!
Reactions: Sciatic

Carrick-On-Seine said:
Jordi Meeus necks his glass of Kwaremont in one go on the podium!
Click to expand...

Makes him the real winner of the race, right?
Of course, not quite fair that the guy who crossed the line first gets such a huge glass...

Devil's Elbow said:
Pedersen fading did mean Meeus had no space to get around Jakobsen though. Would have been close otherwise.
Click to expand...

Hm, if Jakobsen could have continued his initial acceleration instead of holding back and restarting it would not have been close tho
B

Meeus getting closer and closer to a good win. In 2022 he certainly gets one.
Reactions: Sandisfan
C

RedheadDane said:
Makes him the real winner of the race, right?
Of course, not quite fair that the guy who crossed the line first gets such a huge glass...

Certainly made me smile especially when Fabio and Mads looked at him as if to say "did you really just do that dude?"
Reactions: Sandisfan

The first (potential) GC day tomorrow in both Croatia and Sicily. In the CRO Race, we reach the foot of Sveti Jure without climbing it, instead replicating the 2019 finale, which was won by Yevgeniy Gidich in a sprint of 20-odd riders after a stage that had to be shortened to the loop around Makarska after the conditions imposed by the wind were deemed unsafe shortly after the original start. That edition featured an MTF, though, so you'd expect the racing to be a little more selective this time given that bonus seconds look a lot more important now. 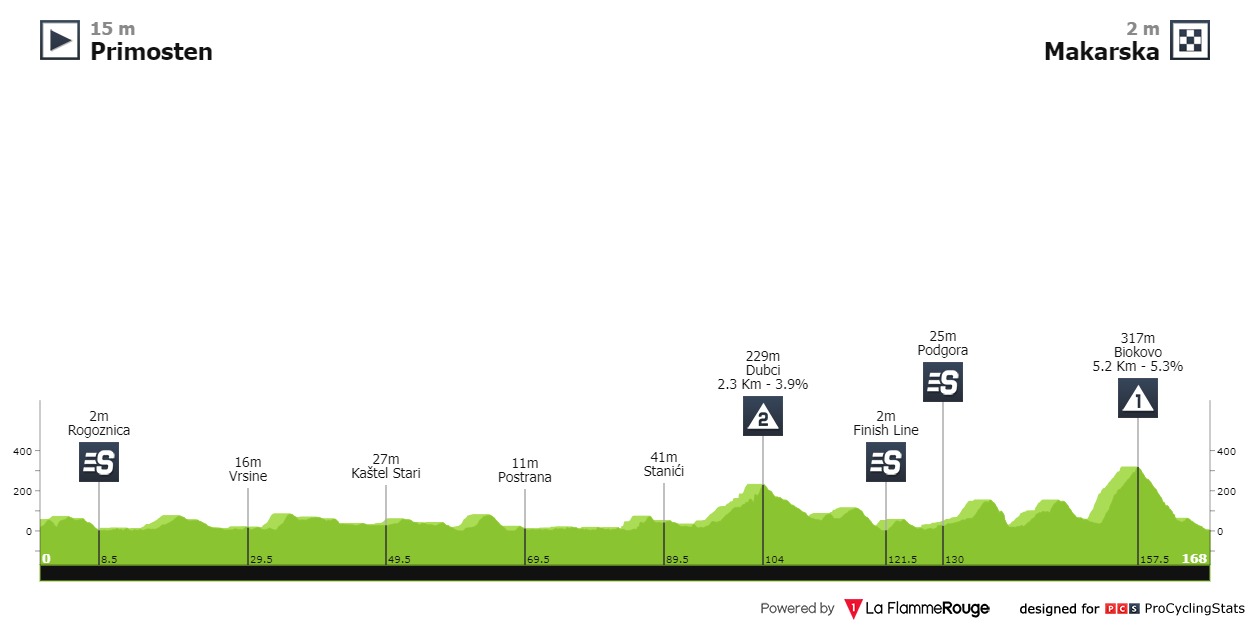 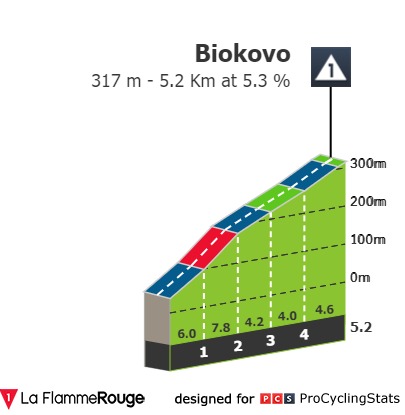 From here, it's mostly downhill to the finish in the marina of Makarska. The finish should be just before 5pm.

In Sicily, we have the only uphill finish of the race. It's not a hard one, but there's a lot more climbing beforehand. 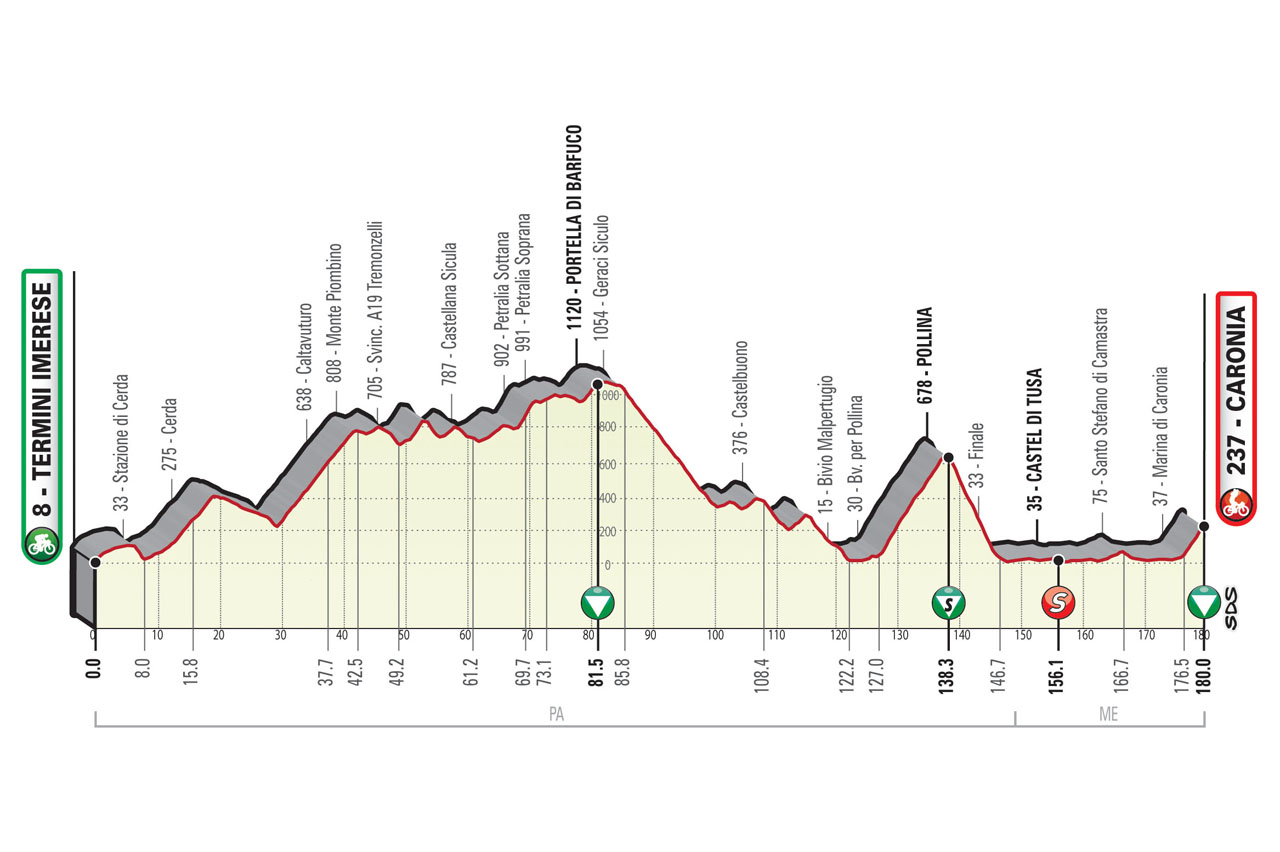 I have no profiles of the early climbs, as per LFR the one through Cerda is 9.1k at 3.8% and the one to Monte Piombino is 13.4k at 4.4%. The climb to Pollina looks to be the hardest of the day, at over 40 kilometres from the line, it should be too far out for attacks, but the peloton should at least be whittled down. 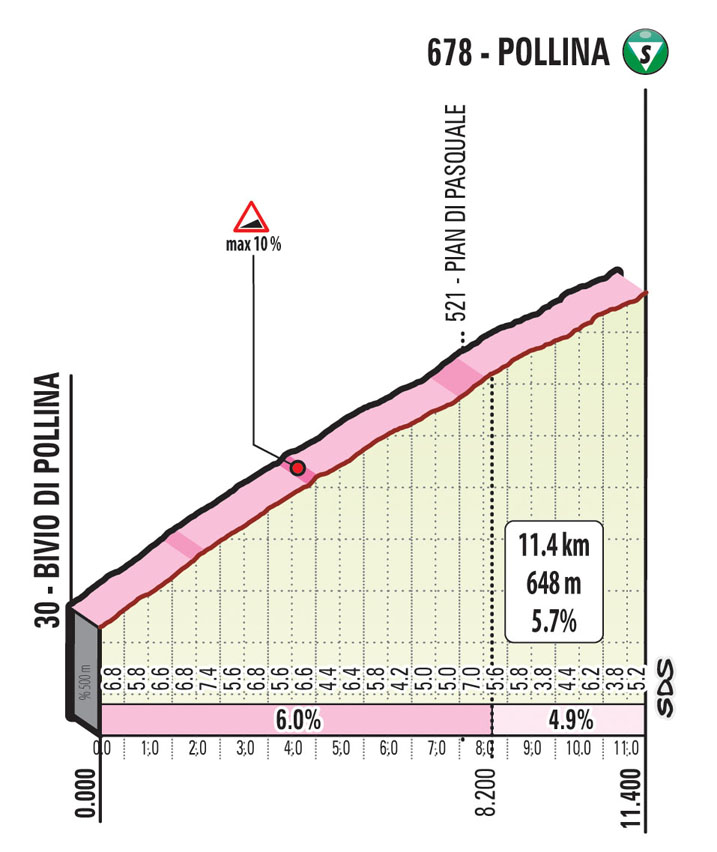 After the descent, there's 30 kilometres of flat along the coast until the uphill finish into Carbonia starts. Bonification seconds and small gaps should set up Friday's queen stage quite nicely. 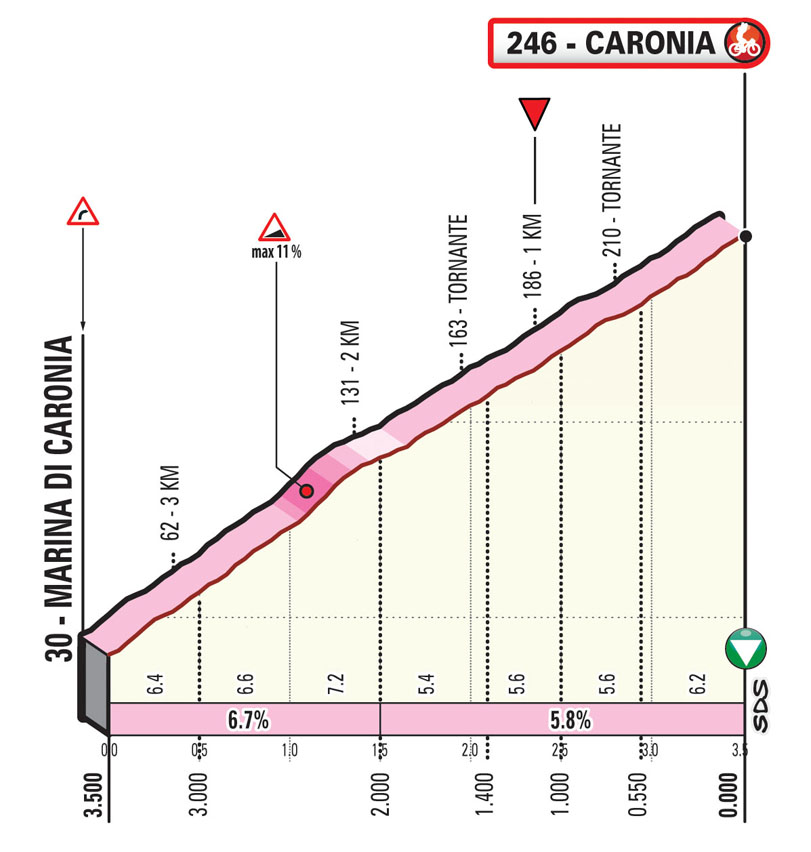