Page 44 - Get up to date with the latest news, scores & standings from the Cycling News Community.
Sidebar Sidebar
Previous Next

I think they should throw in a few more cities in that race name.

Although "Taco van der Hoorn wins Omloop van het Houtland Middelkerke-Lichtervelde" does have some ring to it.
Reactions: Sandisfan and Sciatic

Taco should be at the Worlds.

Taco has gone from being a guy mostly known fo having the best name in the peloton to being one of the best baroudeurs. Really nice season for him.
Reactions: Sandisfan and RedheadDane
W

Ricco' said:
Taco should be at the Worlds.
Click to expand...

It was a great win, but remember everyone is actually at Worlds...
Z

will-10 said:
It was a great win, but remember everyone is actually at Worlds...
Click to expand...

You are right, but if I were picking the Dutch squad for a worlds on this parcours, I would have taken him. Very dangerous if he makes a reasonably strong break of the day, very durable as a domestique if he doesn’t. In fact there are very few teams at the WCRR I wouldn’t pick him for if he was available.
Last edited: Sep 23, 2021
Reactions: Sandisfan and will-10

Meanwhile, over in France:

RedheadDane said:
Meanwhile, over in France:

How are Philipsen's chances as an outsider for Roubaix? He was 4th in the U23 race some years ago, but it's a different game now.
Reactions: Sandisfan

In the CRO Race and the Giro di Sicilia, two of the final stage races of the season start tomorrow. Both open with a sprint stage, in Croatia it's the usual long stage through the flat eastern part of the country (with an incredibly short, technical final circuit through the city centre, another usual feature of this race)... 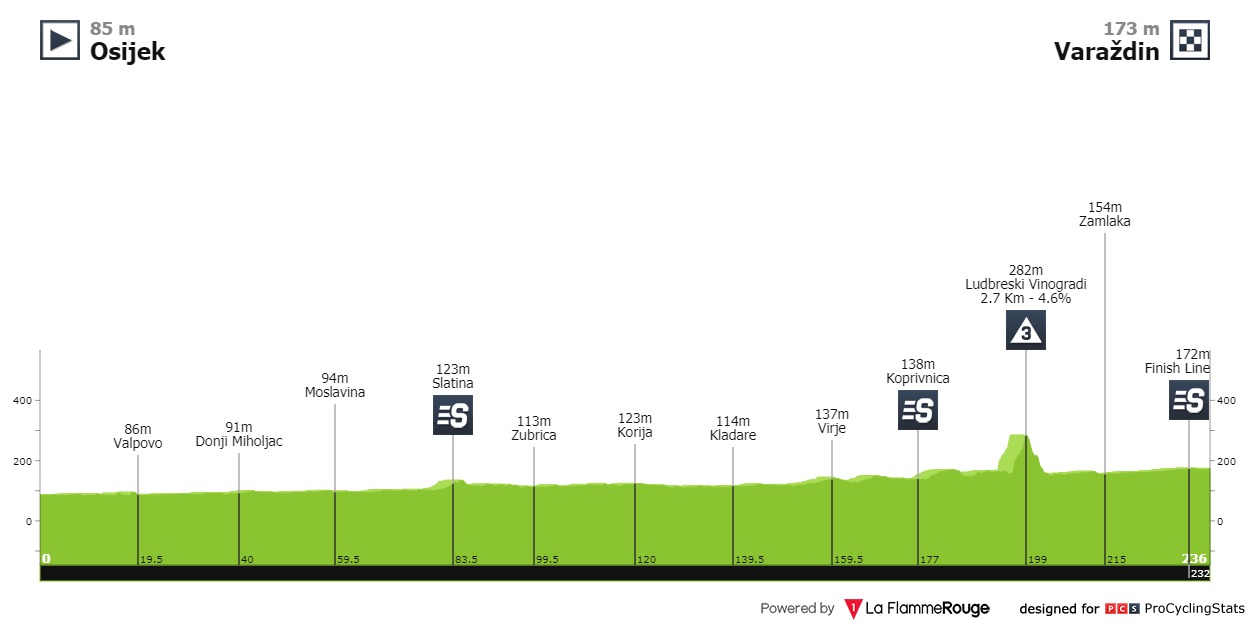 ...while in Italy, the day is a bit hillier, but also at a pretty standard distance. The final straight is slightly uphill at 2%, but also just 250 metres long with a 90-degree turn leading into it. 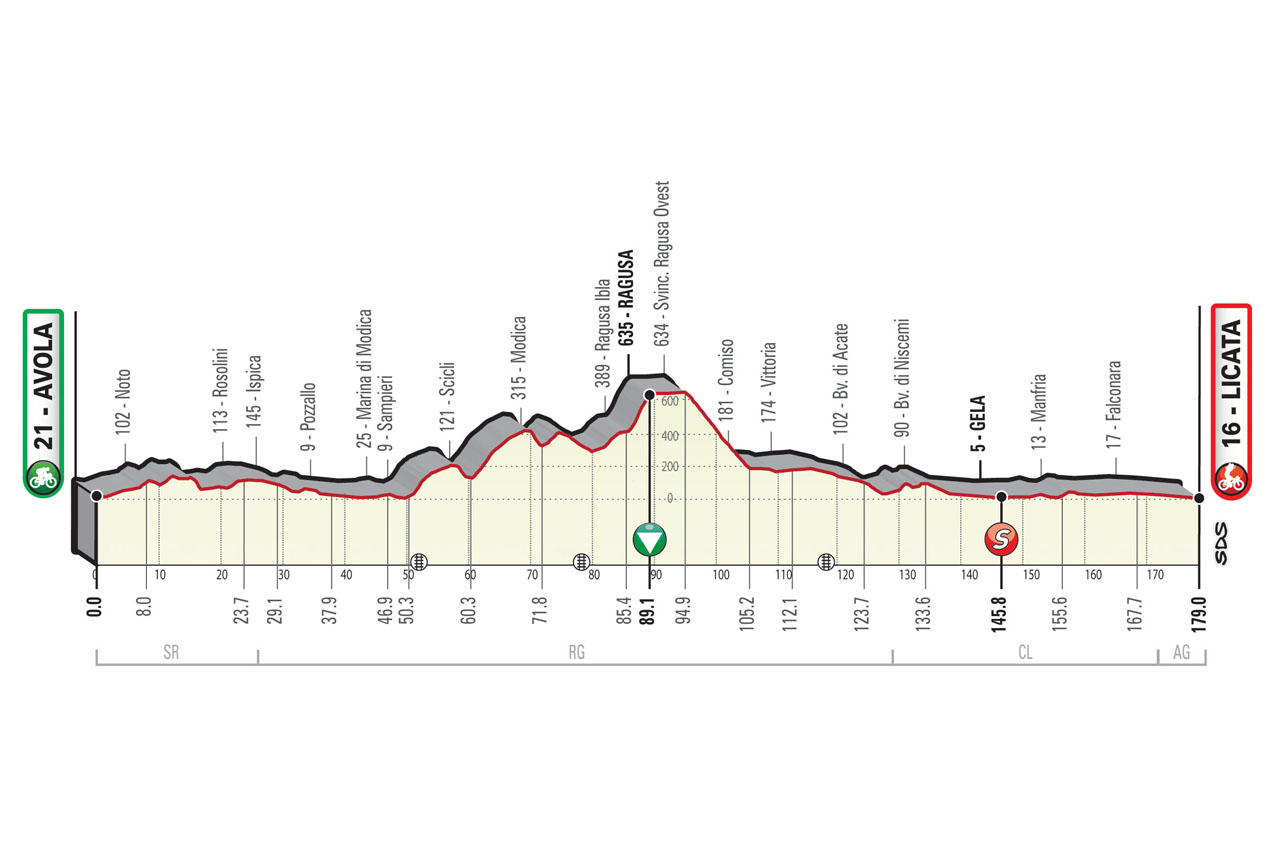 Neither race has a big MTF, but both should be decently selective. Simon Yates would normally be the big favourite to take Adam's title (from 2019) in Croatia, but he hasn't raced since Burgos back in early August. Disregarding him, both Jumbo-Visma and Bahrain-Victorious arrive with a host of options - Foss, Harper and Oomen versus Buitrago, Landa, Padun and Pernsteiner. The final WT team, Israel Start-Up Nation, arrive with a weak squad that will probably be led by Krists Neilands. Among the smaller teams, Uno-X (unsurprisingly) stands out with a team led by Markus Hoelgaard, fresh from a great ride at the Worlds. For the sprints, we have Bauhaus, Kooij, Groves, Einhorn and Halvorsen.

At Sicily, Alejandro Valverde returns to racing, leading a strong Movistar side featuring Marc Soler, Antonio Pedrero, Einer Rubio and an in-form Davide Villella. Trek-Segafredo are of course led by Vincenzo Nibali with Mattias Skjelmose Jensen also there, DSM bring a strong side with Thymen Arensman, Chris Hamilton and Andreas Leknessund in support of Romain Bardet, UAE have defending champion Brandon McNulty alongside Joe Dombrowski, David de la Cruz and Alessandro Covi, while Israel Start-Up Nation have an even worse squad than in Croatia, to the point where Chris Froome might actually be their highest-placing finisher. On the PCT rosters, the standout riders are Lorenzo Fortunato for EOLO-Kometa, Jefferson Cepeda and Eduardo Sepúlveda for Androni, and Simone Velasco for Gazprom, As for the sprinters, we get to enjoy Jakub Mareczko and Andrea Guardini trying to survive the climbs. Trek have Matteo Moschetti (or Jacopo Mosca, if he's dropped), EOLO can choose between Manuel Belletti and Vincenzo Albanese, and then Juan Sebastián Molano and Filippo Fiorelli should be leading their respective sides on these flatter days.

The finishing times move around a lot for Croatia, tomorrow there will be no overlap with Sicilia finishing around 3pm and Croatia two hours later.

All in all, should be two solid races to bridge the gap between the Worlds and Paris-Roubaix/the Italian fall (semi)classics.
Reactions: Rollthedice, Samu Cuenca, yaco and 1 other person

So Trek is starting Giro di Sicilia with:

I hope they brought Egholm as a reserve so Eg feels a bit less lonely.
Reactions: johnymax, Sandisfan, tobydawq and 4 others

10k to go in Sicily, the breakaway has been reeled in by a seemingly complete peloton (Mareczko is definitely there). Tune in now to enjoy bad Eurosport audio quality.
Reactions: Sandisfan

Poor Albanese, caught by Molano on the last meters.
One hell of a leadout by Richeze, who dropped the rest of the bunch out of the final corner.
Reactions: Sandisfan

Albanese attacked just over a kilometre out, but just got pipped by Molano in the final 50 metres. Richeze was in third, none of the other teams were anywhere in the technical final kilometre.
Reactions: Sandisfan
F

One rider really *** up the last corner and gave the two UAE guys a big gap before the sprint even started.
Reactions: Sandisfan 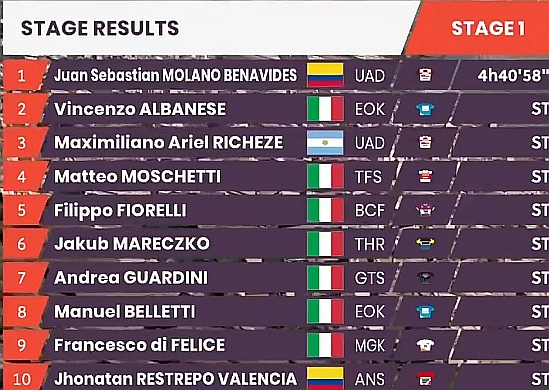 Shades of the last time the Giro was on Sicily with those barriers blowing away...
Reactions: Sandisfan

F_Cance said:
One rider really *** up the last corner and gave the two UAE guys a big gap before the sprint even started.
Click to expand...

Yeah, but from the overhead shot it looked like the gap only got bigger once Richeze started his leadout. After he was done Molano also still had Albanese's slipstream, I doubt anyone would have beaten him today.
Reactions: Sandisfan

Mayomaniac said:
Yeah, but from the overhead shot it looked like the gap only got bigger once Richeze started his leadout. After he was done Molano also still had Albanese's slipstream, I doubt anyone would have beaten him today.
Click to expand...

Probably true, but Moschetti tried to cut the corner and considerably slowed down the group behind.
Moschetti's positioning / bike handling aren't the best.
Reactions: Sandisfan

I like Euskaltel duo attacks for the visuals if nothing else. It isn't going anywhere, though - 21 seconds at 11.5k to go.
Reactions: Sandisfan

Bauhaus takes it. Kooij didn't look happy but difficult to maintain a straight line in this sprint...
Reactions: Sandisfan and RedheadDane

Just watched today’s Giro di Sicilia stage a bit, this is more like an infomercial, showing buildings and cities like all the time

Second and final flat sprint stage in a row tomorrow in Croatia, albeit with more climbing than yesterday. 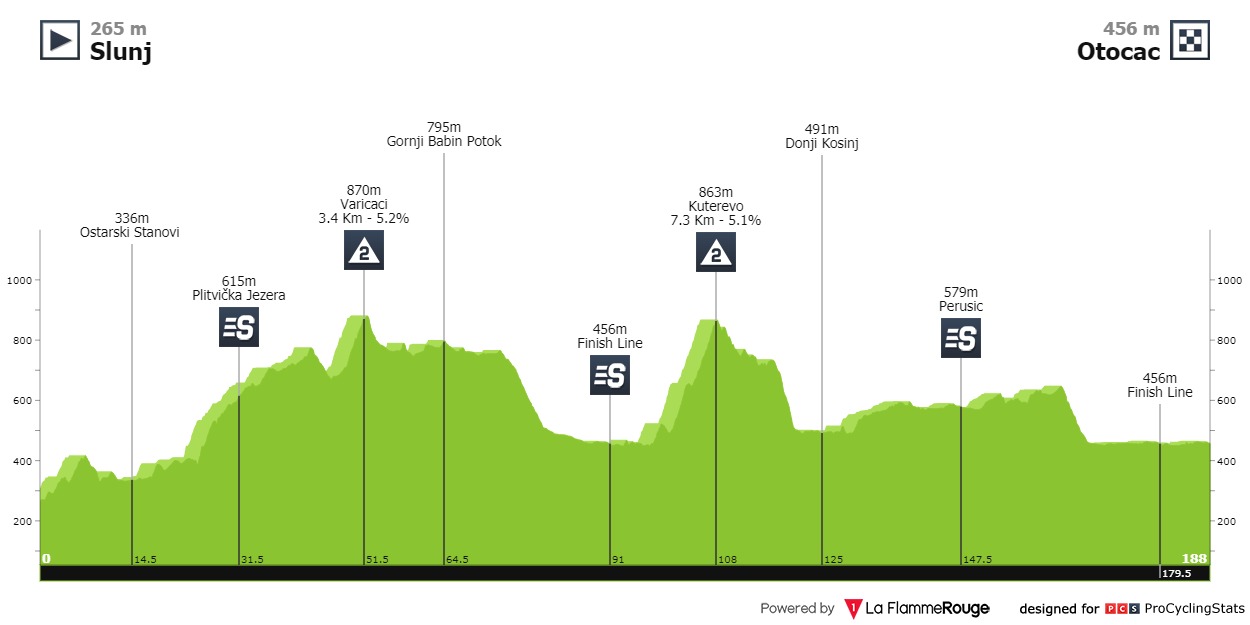 The route passes through the the Plitviče lakes UNESCO natural heritage site early on, then takes on the main climb of the day to Kuterevo mid-stage. 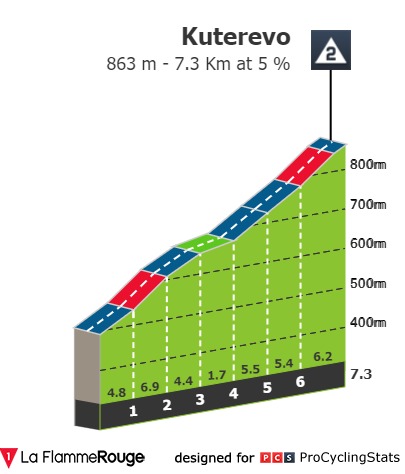 The final circuit in Otočac looks much better than today's - some narrow country roads in the first half, then the final kilometres on the main road without much in the way of curves. Like today, the finish will be around 5pm.

Over in Sicily, it's a similar story: second and final sprint opportunity on a harder route than today's. 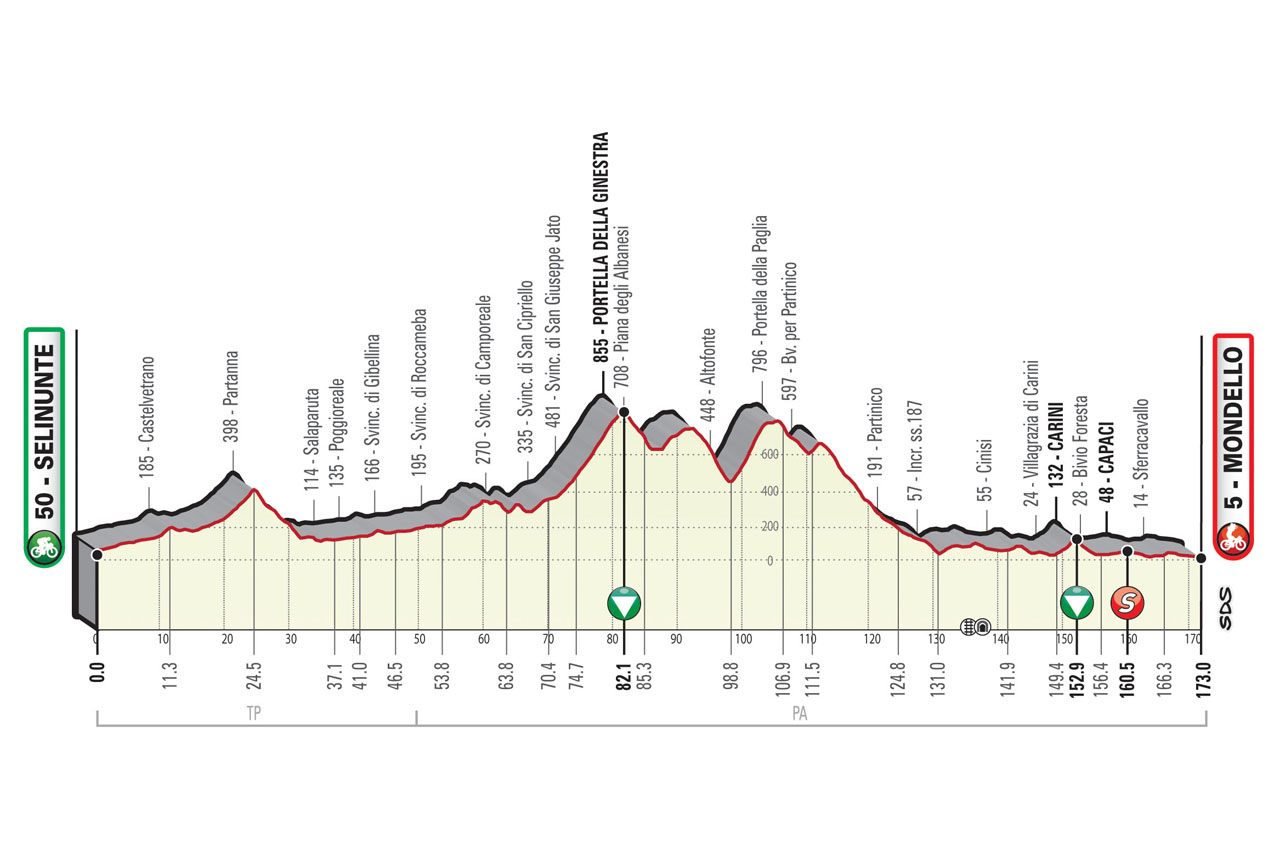 The main climb of the day is to Portella della Ginestra. At the summit, there is a memorial to one of the darker pages of Sicilian history that occurred here. In 1947, in reaction to the Communist party's victory in the Sicilian local elections of that year, attendants of a Labour Day celebration were massacred during a speech by a local Communist leader. Five years later, a bandit band led by Salvatore Giuliano would be convicted (Giuliano himself had been murdered in retaliation by this time); however, this version of events was disputed by many on the left, including the leader of the Sicilian communists, who claimed the mafia had organised the attack in retaliation to his party's land redistribution proposals. What is undisputed, however, is the death of 13 civilians and the wounding of 27 more, hence this story. 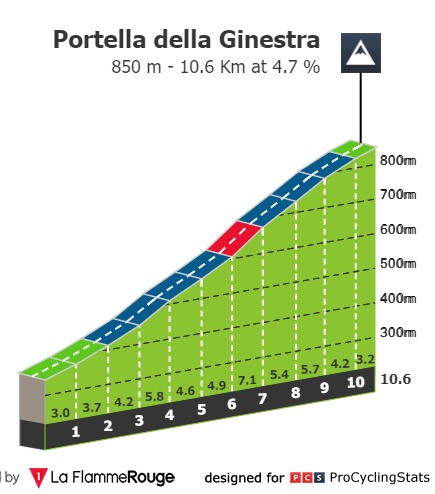 There's another climb shortly after to the Portella della Paglia (7.7k at 4.6%), followed by a long, gradual descent to the coast and a rolling final 42 kilometres - the climb to Carini should trouble nobody. The final is more straightforward than today's, with a final left-hander at 600 metres from the line, which sits on a road that bends slightly to the right to follow the coast. The finish should, once again, be at about 3pm.

The main race of the day, however, is the Eurométropole Tour. Traditionally a race that ends in a (reduced) sprint, the route looks a bit more selective this year with the harder side of Croix Jubaru climbed five times on a local circuit just under 15 kilometres in length.

Before we get there, though, we have five climbs in the Pays des Collines, some of which are pretty hard. The first one, La Folie, is quite easy, though. 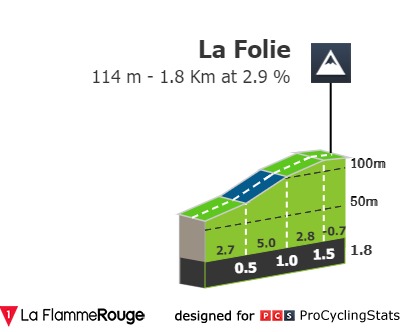 This backs into the steep climb to Les Papins.

The next climb is another easy one to Le Semenil, it's the final 2 kilometres of the profile below.

The final two climbs is where the damage should be done if any team wants to turn the screw: first the steep climb to Le Bourliquet (minus the final 150 metres)...

...then the steeper, better-known, but also wider Mont-Saint-Laurent, with its 400-metre cobbled section coming where the gradients are at their highest.

25 flat kilometres take us to Tournai for the aforementioned circuit. Col de la Croix Jubaru isn't the hardest climb, but five ascents of it, with the summit at 10.8k from the line each time, should make the race harder for the sprinters than it has been.

The finish line is in a different place than in 2019, so no repeat of the Hodeg crash either, hopefully.

With no less than 12 WorldTour teams here, the field is pretty strong. At Cofidis, defending champion Piet Allegaert will probably be on domestique duty for Elia Viviani, while a Deceuninck squad also featuring the likes of Jannik Steimle should be all-in for Fabio Jakobsen. EF Education First, INEOS Grenadiers, Groupama-FDJ and Lotto-Soudal don't have the best of sprint options, but with the likes of Stefan Bissegger, Michael Valgren, Michal Kwiatkowski, Luke Rowe, Clément Davy (who was in that final group of three to get caught at GP Denain), Philippe Gilbert and Tosh van der Sande, there is some firepower between them to make for a hard race. Trek-Segafredo have another former winner in Mads Pedersen in addition to Edward Theuns and Alex Kirsch, UAE have a very strong team featuring Alexander Kristoff, Fernando Gaviria and Matteo Trentin, and Israel-Start-Up Nation also have depth with Sep Vanmarcke, Rudy Barbier, Hugo Hofstetter and Tom Van Asbroeck. Qhubeka-NextHash bring Simon Clarke and Max Walscheid, Intermarché have Danny van Poppel, Andrea Pasqualon and of course Taco van der Hoorn here, and finally there's Bora-Hansgrohe with Jordi Meeus and Maximilian Schachmann. On the ProTeam rosters, the likes of Jens Debusschere (another former winner, albeit back in the stage race days of this race), Luca Mozzato, Nacer Bouhanni, Dan McLay (also a former winner), Bram Welten, Arvid de Kleijn and Niccolò Bonifazio can be found. Finish should be at about 5:15pm.
Reactions: johnymax, glassmoon, Carrick-On-Seine and 2 others
You must log in or register to reply here.
Share:
Facebook Twitter Reddit Tumblr WhatsApp Email Link