Armchair cyclist said:
My French is rather rusty: I can get the gist of it but may be missing nuance, and because it was not posted as a message I can't put it through a translator app without retyping it all. Would somebody be able to do the honours 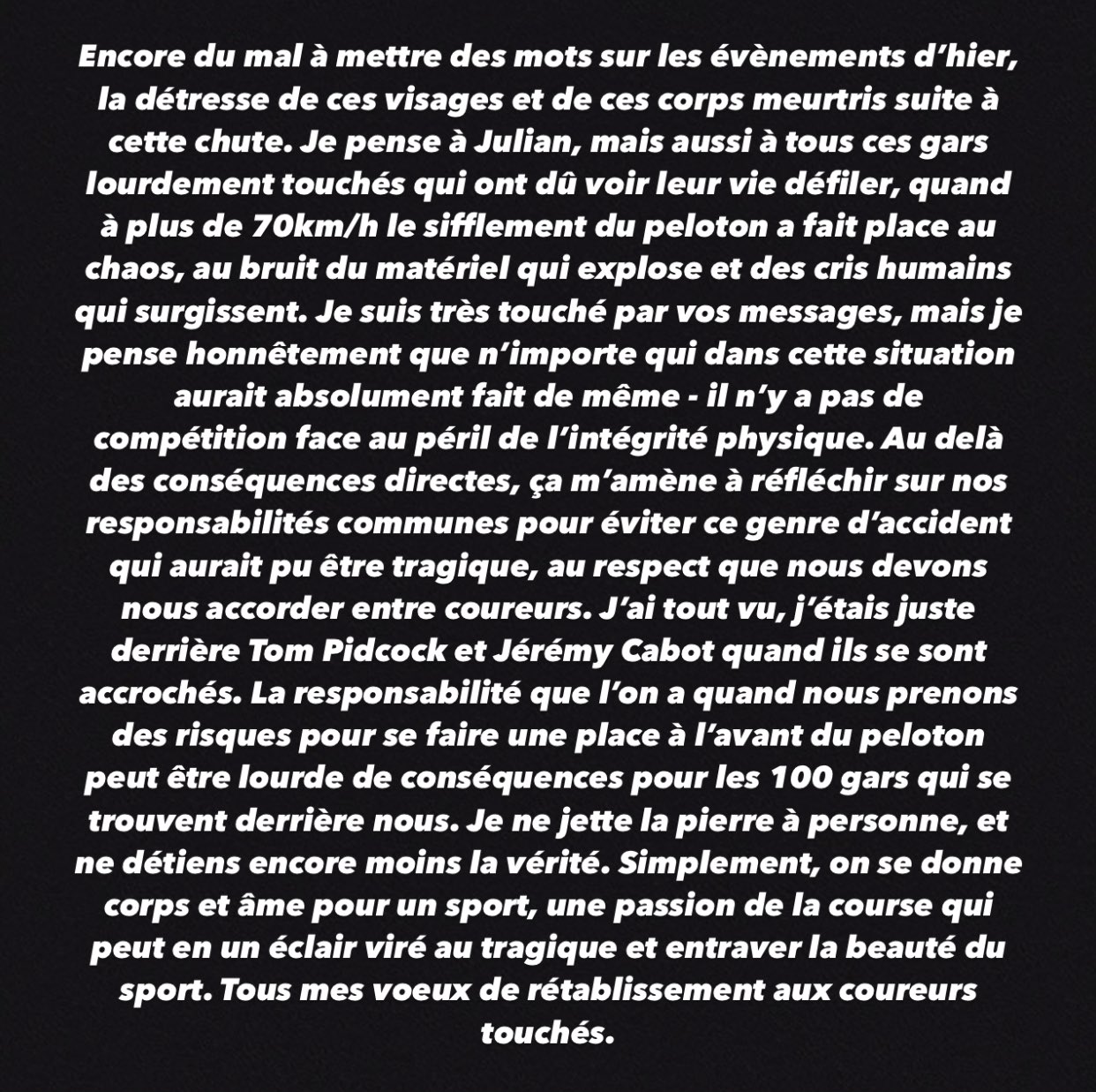 Not perfect but you'll get it I hope :

"Still having troubles putting words on yesterday's events, the fear on those faces and the bodies bruised from this fall.
I think to Julian, but also to all those guys seriously hit that may have seen their life flash by, when at 70km/h + the peleton's sound
let place to chaos, to the sound of equipment crushed and to humans' screams.
I am deeply touched by your messages, but I honestly think that anyone in this situation would have done the same.
There is no competition when physical intregity is at stake.
Beyond the consequences, it make us think about our shared responsabilities to avoid those kind of accident, which could
have been tragical, to the respect we must have between riders.
I've seen all, I was just behind TP and JC, when their bikes clipped.
The responsability we have when we take risks to be on front of the peleton can be heavy for the 100 guys that are behind us.
I don't want to point someone particular, I don't have the perfect truth.
Simply, we give everything to the sport, and that passion of the race can in one blink of an eye turn to tragic and tarnish the beauty of the sport.
All my whishes to every riders hurted."

Also JC later posted something about behind pointed out and RB then clarified that he did not wanted (at all) to say it was JC's fault.
Reactions: Sandisfan

dazaau said:
From Google Lens:
Still struggling to put words to the events of yesterday, the distress of these faces and these bruised bodies following this fall. I'm thinking of Julian, but also of all those heavily affected guys who had to see their lives go by, when at more than 70km/h the whistle of the peloton gave way to chaos, the sound of exploding equipment and human cries that arise . I am very touched by your messages, but I honestly think that anyone in this situation would absolutely have done the same - there is no competition in the face of the risk of physical integrity. Beyond the direct consequences, it leads me to think about our common responsibilities to avoid this kind of accident which could have been tragic, to the respect that we must grant each other as runners. I saw it all, I was right behind Tom Pidcock and Jérémy Cabot when they collided. The responsibility we have when we take risks to get a place at the front of the peloton can have serious consequences for the 100 guys behind us. I don't blame anyone, let alone hold the truth. Simply, we give ourselves body and soul for a sport, a passion for running that can in a flash turn tragic and hinder the beauty of sport. All my best wishes for recovery to the runners affected.
Click to expand...

damn google lens is good ! why did we not have it at school in my days....
Reactions: Sandisfan

This giro is starting quite well for Bardet.
He said that he and his trainers found the correct training method for him and that this year is the first where the full effect will happen.
Is it just talk ? I think no, he not that kind of guy.
I think he has a real shot at a podium.
Carapaz has a solid team but I am not sure that on his own he can drop Bardet for good, and for sure if there is a descent before the finish line, Bardet will get back.
Peak Yates and peak Landa could drop him but that's about it.
Bardet also has Arensman who looks really good.
If he survives stage 9 with the best, we can start to dream (as French).
Reactions: ExperienPT, Jumbo Visma Fan :), Sandisfan and 2 others
P

I would be extremly hyped if Bardet regained his form. Always liked him.
Reactions: VeloMaster, dercuforever, Jumbo Visma Fan :) and 3 others
H

Bardet can podium esp with the little TT miles and his form looks good.
Hope he keeps it till Verona
Reactions: Sciatic

BTW, forgot to mention this:

It was a pleasure to see Bardet chase bonus seconds and lead the sprint train in the last 2kms.
Reactions: Sandisfan
S

With it clear that Nibali will not be able to be at the top level (and I didn’t expect he would), Bardet is the one I’m rooting for the most.
Reactions: movingtarget, dercuforever and Rollthedice
H

Bardet is looking very frisky and up for the battle. With only 20ish km left of ITT a top 5 looks very possible if he avoids a jour sans. Only Landa, Yates and Carapaz are proven better climbers on each riders best days and his elite descending skills can also give him an edge.

A podium would be a fitting reward.
Reactions: Jumbo Visma Fan :), Sandisfan and Wyndbrook
B

Bardet has actually looked quite good in a number of recent GTs but had bad luck in 2020 TdF, when he crashed out he was in fourth place. And he did manage to salvage the polka dots in 2019 TdF.

I don't think his level has declined so much as I initially thought, but the competition has gotten tougher ( adding 2 more strong teams into the mix with UAE and Jumbo to Sky/Ineos puts more pressure on the weaker teams like AG2R and DSM).

I am really hoping he can podium here, or at least fight for a place. he was clearly coming better toward the end of the 21 Giro but sort of ran out of road. I know he likes to attack but I think he needs to pace himself, especially on Blockhaus, until the Dolomites.
Reactions: Bye Bye Bicycle and Sandisfan

Stages or GC? Romain played it smart, go for the GC and reassess the situation on the eve of Stage 9.

Carapaz is still the favorite Bardet and Landa haven't said their last word. Almeida is flying under the radar. Il Squalo can still win this bike race!

Close but no cigar for the win today. But Romain looked really good and so does the big picture.
Reactions: Rollthedice and Sandisfan
C


But then again, you have your signature in Italian. Perhaps you're a native speaker who had a brain-fart and here I am, preaching to the choir.
Reactions: Sandisfan

Cagalitroso said:
But then again, you have your signature in Italian. Perhaps you're a native speaker who had a brain-fart and here I am, preaching to the choir.
Click to expand...

Should have won stage 9. He was the strongest on the climb
Reactions: Sandisfan, Sciatic, Rollthedice and 2 others

Hope he can keep up in the last week. Best chance he has in all his career to win a GT.
Reactions: Sandisfan and Ilmaestro99
S

HelloDolly said:
Should have won stage 9. He was the strongest on the climb
Click to expand...

At least he did try attacking (maybe more like pushing the pace) when they were the lead trio. So it’s not like he didn’t try, whereas Carapaz only did his initial attack when Porte dropped off and Landa only followed. I think if Landa had ridden harder the 3 of them would have stayed clear of the chasers.
Reactions: Sandisfan


But then again, you have your signature in Italian. Perhaps you're a native speaker who had a brain-fart and here I am, preaching to the choir.
Click to expand...

My signature you shall read in July when my homeboy Thibaut Pinot celebrates many victories
Reactions: Sandisfan and SHAD0W93

Tonton said:
My signature you shall read in July when my homeboy Thibaut Pinot celebrates many victories
Click to expand...

Just don’t drink too much wine!
Reactions: RedheadDane and Sandisfan

This is total bull****
I was rooting big time for Bardet, even looking ahead to see where he could attack downhill in the final week.
This is a huge blow to the race and so disappointing for Bardet fans.
Reactions: StryderHells, Sandisfan, shalgo and 8 others
B

Does he ride the Tour now or save matches for Vuelta?
Reactions: Sandisfan

Bolder said:
Does he ride the Tour now or save matches for Vuelta?
Click to expand...

I hope he recovers fast enough from his illness to ride the Tour. His form is/was the best he's had in years. He hasn't had to draw on it too much, so the Giro could be seen as a kind of prep stage race for the TDF. ... I'm trying to make a case for it.
Reactions: Sandisfan

Even if he recoverse, this may have been the chance of a lifetime to win a Grand Tour for Bardet. Even in this form he pretty much has no shot against the Slovenians.

Really sad. I used to be pretty indifferent to him, but I'm starting to warm up to him.
Reactions: hayneplane, SafeBet, shalgo and 5 others
G

Personally I always have been a fan of Bardet. Aggressive rider that seems to be a wonderful person and that brings with him that kind of a tragic heroe Karma which makes me sad for him!
Reactions: hayneplane, StryderHells, Sandisfan and 2 others

I think I just have a soft spot for French guys who struggle to live up to the expectations...