Here is a more recent article in Italian about him:
https://www.suiveur.it/storie/mano-libera/tadej-pogacar/

And interview with him after yesterday's win:
http://www.cyclingnews.com/news/tour-of-california-pogacar-seizes-control-on-mt-baldy/

Sealed the overall today, the opponents didn't make it easy for him that's for sure. Much kudos to him and his team. 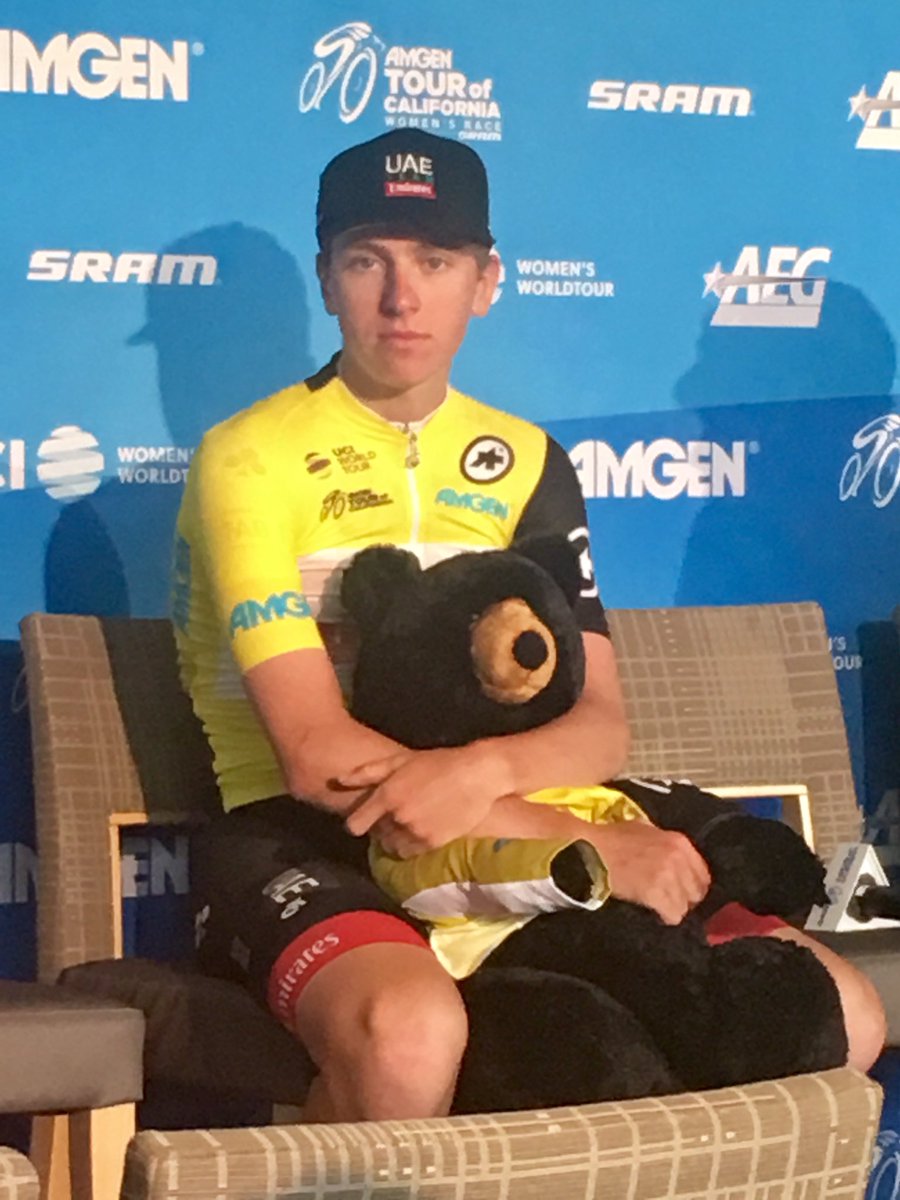 Impressed by his maturity.
B

Big win for a 20 year old. Weakish field, but that shouldn't take anything away from him. There's an incredible crop of U-25 talent right now; let's see who will be the first to win a GT.

Philipsen: "Pogacar has the qualities to win a GT someday"

The Slovenian super talent Tadej Pogacar (UAE Team Emirates) crowned itself as the youngest ever winner of a stage race in the WorldTour last weekend. "Unlike other classification men, he is not afraid of a peloton," says Pogacar's teammate Jasper Philipsen.

Philipsen: "It all just happens with him"

The name Tadej Pogacar probably caused few bells to ring at the start of the season. 20-year-old Slovenian has only been in the WorldTour since this year, but came in at the big gate.

"I was not completely surprised by his performance," says Jasper Philipsen about his teammate at UAE. "I knew that Pogi (that's what we call him in the team) had a lot to offer. But that he finishes in such a way is very clever."

"No one will deny that Tadej is a super talent. What he has already shown this season is quite unseen. It is all just happening to him, it is incredible."

"If he lives for it, he can someday win a GT"

Philipsen is particularly impressed by his ability to climb. "Pogacar can kick his pedals enormously hard for a long time. Unlike other classification men, he is not afraid of a peloton either. Pogacar is able to pull his plan well, so we don't have to guide him quickly through the peloton."

"Many good youth riders who make the switch to the pros often need some time to adjust. But Pogacar is one of those who are immediately there. You need a lot of talent for that. That the coaching within the team is very good, will also play a role. "

Is Pogacar a future winner of the Tour, Giro or Vuelta? "He certainly has the qualities to win a big round. If he stays there for life and work like this, then that is certainly possible."

"Pogacar will certainly not start to float. He is a normal, cool and down-to-earth guy."

Jasper Philipsen himself was also in the spotlight last week during the Tour of California. "I have been close to a stage victory a few times," says our young countryman. "But I can't blame myself much."

"If I can maintain this condition, the results will follow. My next appointments are the Hammer Series and the Tour of Limburg. After that there are also a few one-day courses in Belgium on the program such as Across the Hageland, the Heist Arrow and the Eleven Cities Round .
S

With Scarponi, Evans, Contador and Basso gone this kid legit is going to be my new favourite
J

Any chance this kid goes to the Tour, or at least the Vuelta?


Juan Pelota said:
Any chance this kid goes to the Tour, or at least the Vuelta?
Click to expand...

Not this year. Next year probably Giro or Vuelta.

He's riding Tour of Slovenia next. I'd love to see him in the Dauphiné or something of that caliber. I think his biggest achievement was his 6th place in Pais Vasco, i rate that higher than his victories in Cali or Algarve.

Today there was a press conference with Roglič, Polanc and Pogačar for Slovenian media. The last question for Pogačar was when will he ride his first GT. He said the plan is to try next year. Then Roglič pats him twice on his thigh and says jokingly: you better wait for us to finish first.
Everybody starts laughing. It was hilarious :lol:


Logic-is-your-friend said:
He's riding Tour of Slovenia next. I'd love to see him in the Dauphiné or something of that caliber. I think his biggest achievement was his 6th place in Pais Vasco, i rate that higher than his victories in Cali or Algarve.
Click to expand...

He's also riding the one day Lugano race on Sunday together with Fabio Aru:
https://www.procyclingstats.com/race/gp-lugano/2019/startlist

Fabio Aru will also be at Tour of Slovenia with him.

Roglic not even in the top 10.

Not too shabby Against some strong competition too in Mohoric and Tratnik. 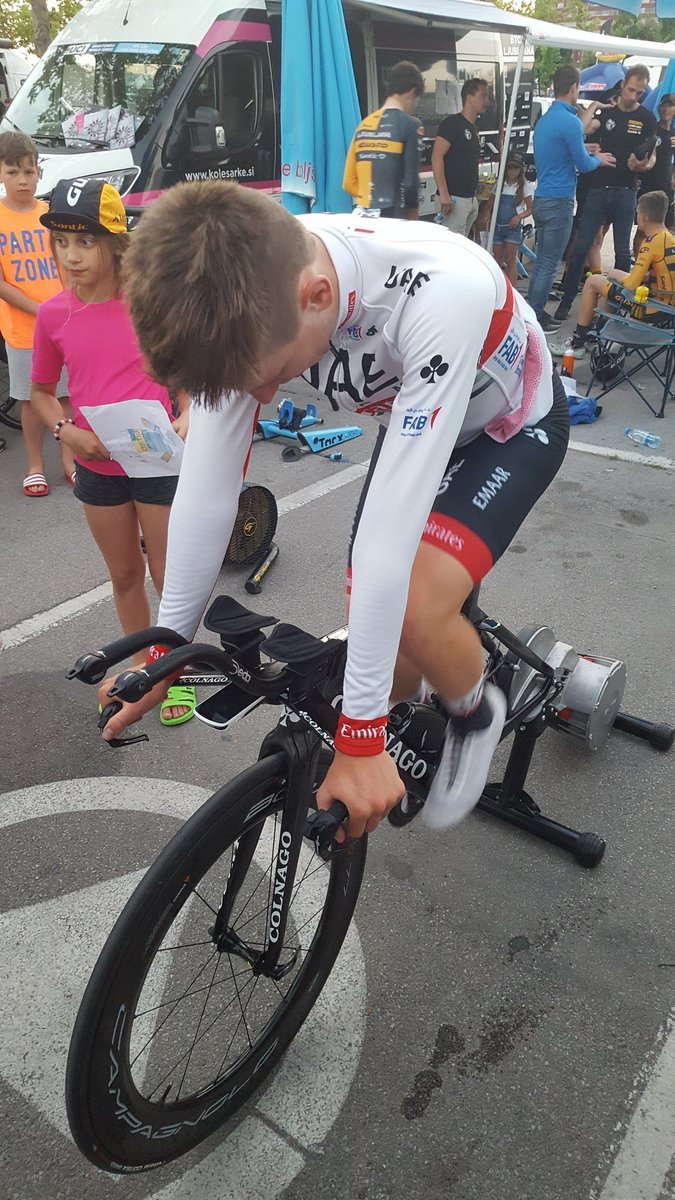 Also just can't believe what palmares he already has at only 20 years of age: 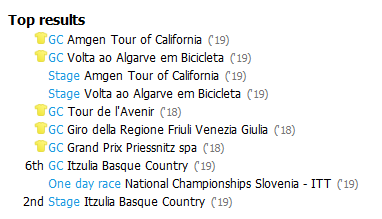 What do you guys consider his most impressive performance? For me personally, it's his 6th place in GC in Pais Vasco. I rate that higher than his win in California and certainly higer than Algarve.


Logic-is-your-friend said:
What do you guys consider his most impressive performance? For me personally, it's his 6th place in GC in Pais Vasco. I rate that higher than his win in California and certainly higer than Algarve.
Click to expand...

Well although Itzulia is much more important and bigger race than California and especially Algarve, it's not freaking Tour de France! So no, no 6th place can beat an overall title at WT race. California for me, although Algarve win was quite impressive too. 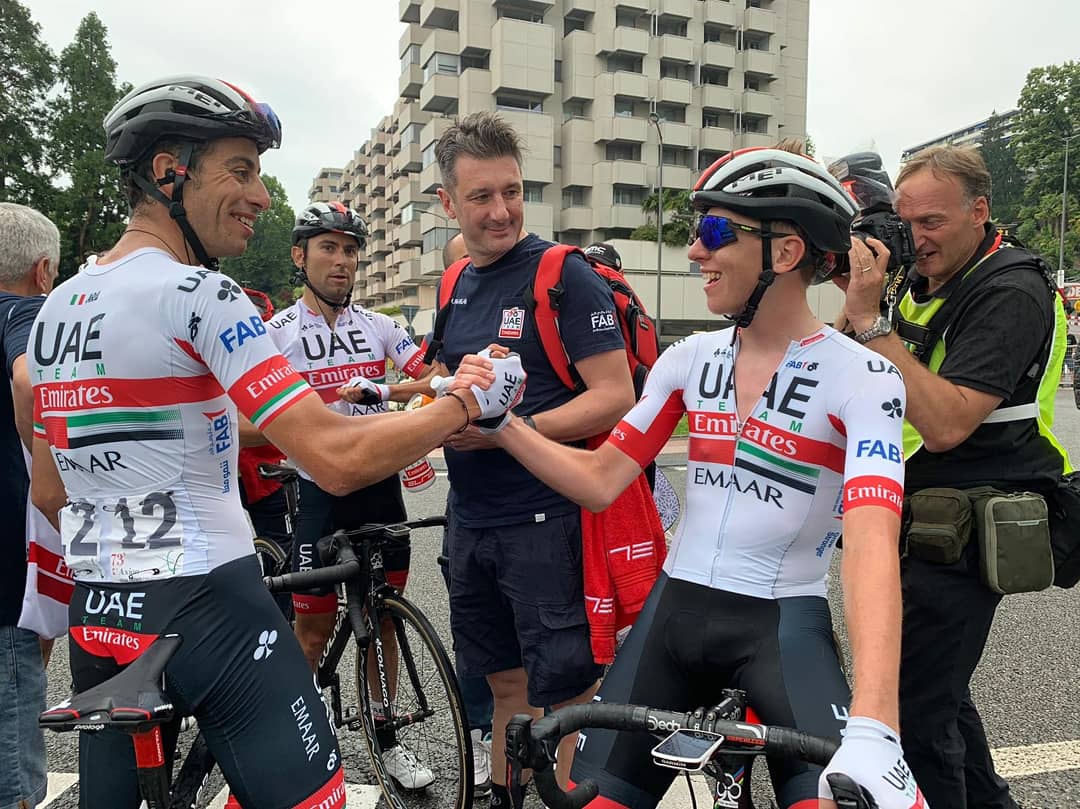 He'll have a short break after the NC, then he'll go to altitude training. After that they'll make a decision with the team if he'll ride the Vuelta or not. The plan at first was not to ride a GT this year but after a smooth transition to the WT level it looks like the team leaders may change their mind after all.

"Tamau Pogi" (something like "Little Pogi" in one of Slovenian dialects; thet's what they call him in cycling circles ) also said that he prefers colder weather to hot weather and if he has to choose, he'd choose the Giro as his favourite GT.

Wasn't Pogacar supposed to first target the 2020 Tour of Switzerland before doing his first grand tour in 2021? So they can test whether he's able to produce over 9 days what's asked over 3 weeks in a Giro d'Italia & Tour de France!


staubsauger said:
Wasn't Pogacar supposed to first target the 2020 Tour of Switzerland before doing his first grand tour in 2021? So they can test whether he's able to produce over 9 days what's asked over 3 weeks in a Giro d'Italia & Tour de France!
Click to expand...

A lot of these guys ride the Vuelta, because it is less chaotic, and the tempo is not as fierce as TDF for instance. And then they get off somewhere halfway the second week (planned).

Yeah initially he was going to be doing the Vuelta next year. But I guess no one expected him to so good so fast. He said in an interview himself that the Tour is too nervous/chaotic, but the Vuelta is usually hot which he said he is not a fan of. I guess it also depends on what UAE plans for the Vuelta are.

Pogacar extends with UAE Team Emirates until end of 2023
http://www.cyclingnews.com/news/pogacar-extends-with-uae-team-emirates-until-end-of-2023/

Seems he's staying at UAE for a while. Seems like it might be good for him, also not that many GC guys (mostly Martin and possibly Aru) that he couldn't go for some races. 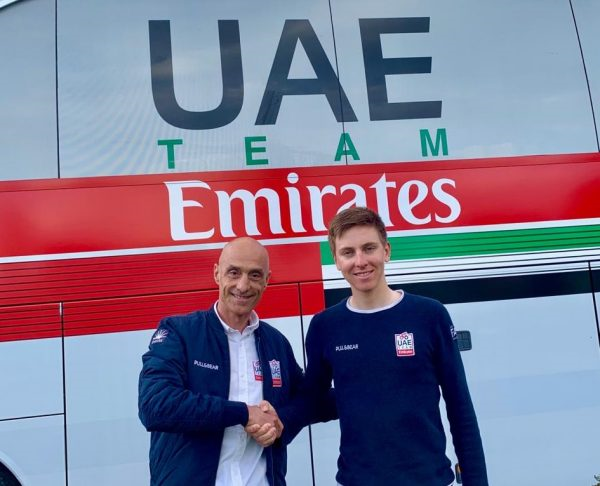