Page 27 - Get up to date with the latest news, scores & standings from the Cycling News Community.
Sidebar Sidebar
Previous Next
S

Of course Kruijswijk will be missed big time by Jumbo, no 3 of last years TdF...

Kruijswijk for Giro then?

Velolover2 said:
Kruijswijk for Giro then?
Click to expand...

Before the calendar was ruined he was set for La Vuelta but it suits him terribly.

What Jumbo will do with Giro/Vuelta is a massive question for me. Im really hoping they will double up with Dumoulin
Reactions: Velolover2
R

Wonder who would replace Kruijswijk in the Tour line up if he's not fit. De Plus? Tolhoek? Or another guy for the flat like Teunissen?
C

Too bad to hear about all the injuries, but still likely the strongest team in 2020.

P.S. Hopefully Tour plan won't be affected all that much.
Reactions: Sandisfan
C 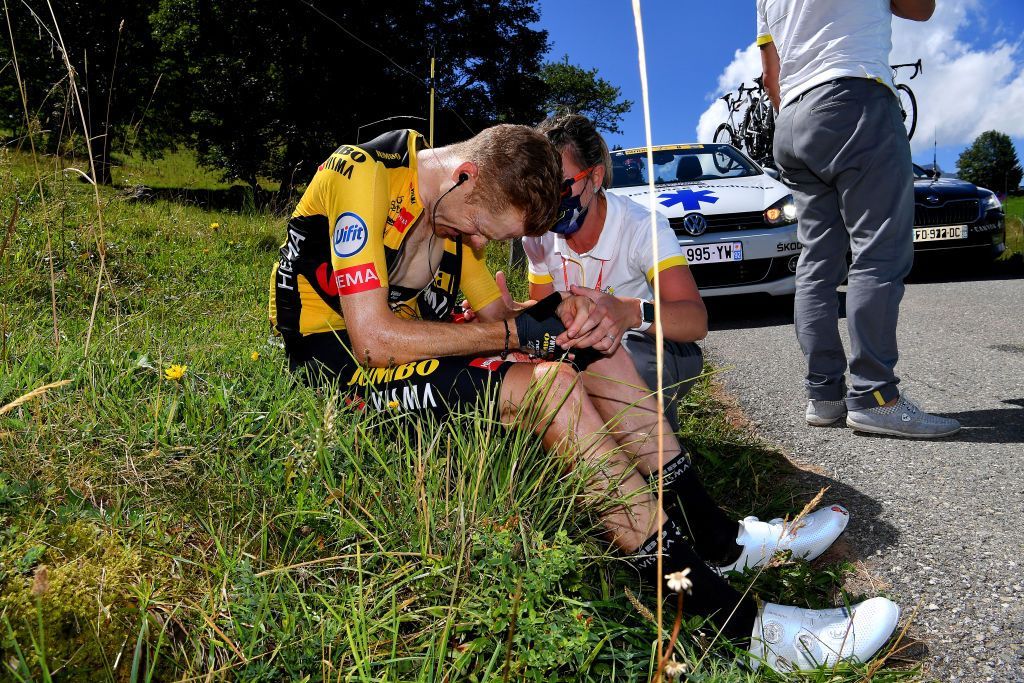 didnt see that one coming.. so one flat guy for a podium TDF finisher.
Maybe secret WvA green plans?

What alternative did they have?

I don't really see how they need another climber. Grondahl Jansen enables Gesink and van Aert to do more work in the mountains where numbers matter, while Kuss and Bennett got the top level climbing covered anyway.
Reactions: yaco, bob.a.feet, kiszol and 1 other person
1

Right. All the other "climbers" they have are mediocre at best, sans De Plus, obviously, who was never under consideration. De Plus is still unfit to race, or so they say.

Yes, they don't need more climbers. This is a good decision.
The Gesink - WVA duo is scary good, they will do massive pulls for the team. When the time of Kuss and Bennett comes the bunch will already be decimated. And Kuss and Bennett are in the best 10-15 climbers in the world right now going by current form as well as overall performance. So I pretty much doubt that any rider besides the few strongest captains of the rival teams can stay with Dumo and Rogla when Kuss/Bennett pulls over. And then Jumbo will still have two cards versus 0 or 1 for every other team. Bringing another good climber would be an overkill. They need guys for the flat / rolling parts as well.
Reactions: Bolder, 18-Valve. (pithy) and gregrowlerson
B

SK is a big loss, don't underestimate what having him would do, which is allow Kuss/Bennett to take a couple of mountain stages off.
A

Without Kruijswijk JV no longer looks as intimidating.
With him they would have:
3 guys capable of podium: Roglic, Dumoulin, Kruijswijk
5 guys capable of being in the selection of elite climbers: above + Bennett and Kuss
7 guys capable of being still there when there are only 30 guys left in the peloton in mountains: above + Gesink and Van Aert
With Jansen as a replacement they have 1 fewer in each of these categories. Yes, this may allow Gesink and Van Aert to save legs a bit more but that's assuming Jumbo would need to control most of the stages which is not certain. A climber would be a preferred option to me when they already have Tony and Wout in the roster. A climber can work on the flat stages if it's necessary but someone like Jansen will not be there in the mountains. Someone like Tolhoek could take some pressure of Kuss and Bennett because they now have 2 guys that will drop early in the mountains instead of one, which means they might be forced to work earlier.
But I guess the team knows the form of the riders best and they have good reasons to go with Jansen.

The thing is other teams have become less intimidating because of injuries as well. So likely they're still the strongest team
A

Yeah, if the riders stay healthy, they are still the strongest team. But their potential to completely control the race took a hit. No matter how much weaker the other teams are- with one fewer elite climber, there will be more breathing space for riders from other teams and JV will not have the potential to outnumber the other teams in the final selection as much. That's why I find them less intimidating now.
R

Van Aert and Gesink are probably as good if not better climbers than anyone else in Jumbo on current form, makes sense to bring another rolleur and save them for later on.

Jansen isn't exactly a limited flat domestique either, he's an all round classics guy more similar to Van Aert than T Martin. He put in a huge ride for WVA at Milano Sanremo if i remember correctly so looks in good form.
Reactions: Sandisfan and yaco

2 weeks ago, Chief MD Peter Verstappen of TJV contacted us to find a solution to reduce saliva aerosol concentrations in the bus. In Staphorst, the Netherlands, headquarters of @PlasmaMade, 3 of my top researchers, myself, Tom Koenderman & CEO Martin Van der Sluis himself performed measurements. Images below. Results show air purification can be very effective. Details are communicated to the team. This does NOT replace the 1.5 m distance and regular disinfection of hands & other surfaces. 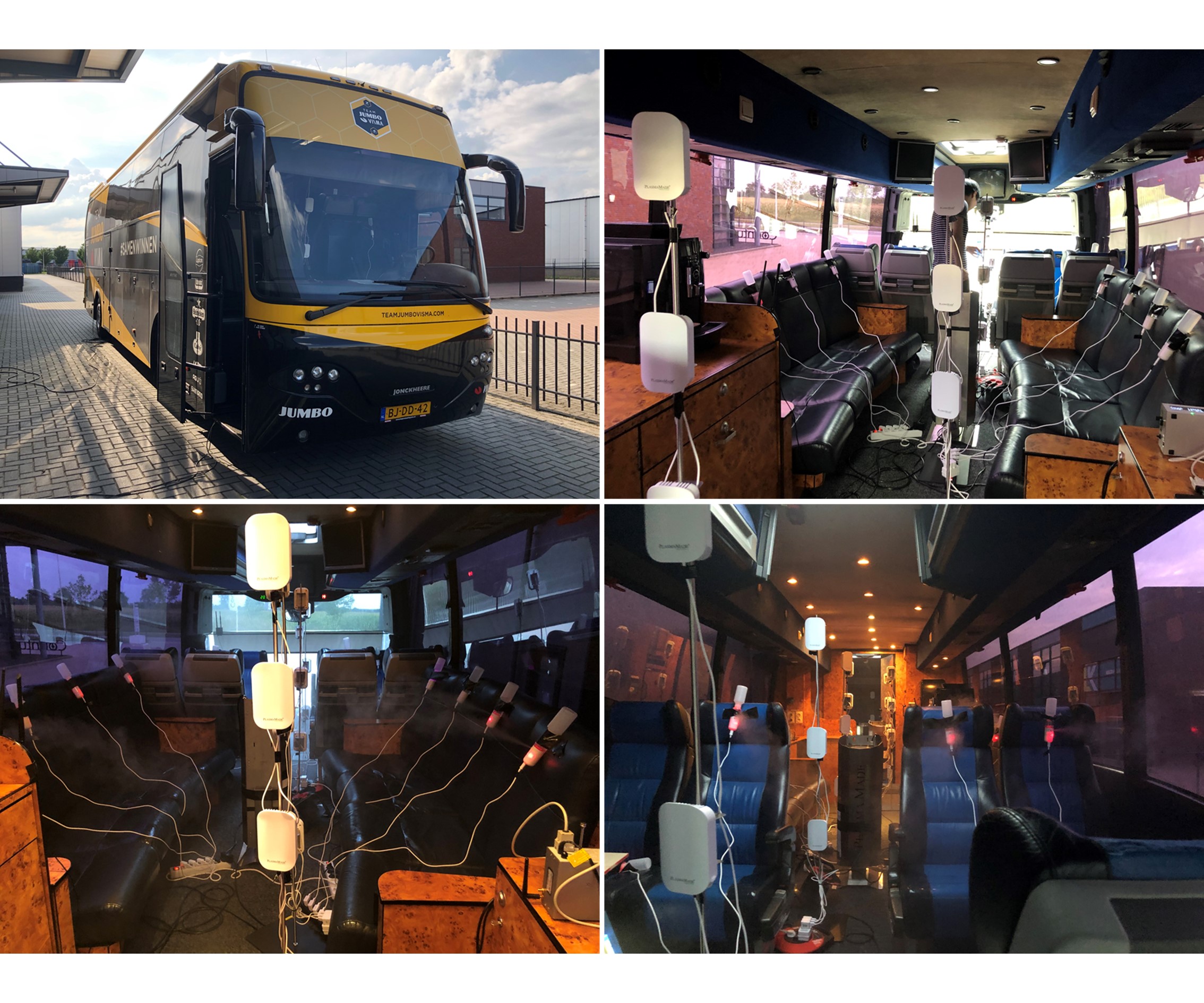 Has Mike Teunissen got back training?

Gesink has a top-five and another top-10 in GC at the TDF. Yes, he's a few years older now, but his form looks very solid. He's done great support work in the prep races, and I expect he's still coming into form for the mountains in le Tour. WvA looks even stronger than last year. Bennett and Kuss, same (stronger even than last year). Losing Kruijswijk is a big loss, but the support system is there for Roglic and DuMoulin if one of them will be truly the strongest rider at the TDF. Big Tom looked stronger each day at the Dauphine. The remaining question would concern how badly Roglic is banged up and whether this will be a factor. We've seen him ride hurt in the Giro and also banged up at the Vuelta while still riding strong. TJV still looks like the strongest team.
S

In theory I'd agree. There are others however who have been specifically targeting the Giro like Nibali and Yates. Depends how fast his recovery is I guess to see whether he can keep in good enough shape for the start of the Giro. The 3rd week suits him definitely.

Not surprised Jumbo have gone for Jansen. As others have mentioned they have more than enough climbing depth with Kuss and Bennett being able to stay at the front until only the leaders of other teams will be around.

WvA could get a few stage wins if the team allows him to fight in the finale on some of the lumpier stages where it is unlikely all of the sprinters will survive.
Reactions: Sandisfan

I think you mean Steven can easily be taken out
Reactions: Sandisfan, F_Cance and Red Rick

He's more consistent than some of the other contenders, but I don't see how he has anything over Nibali. Even if their climbing is equal, and if Kruijswijk TTs better I think Nibs descending prowess would undo that difference alone. A good descender might be able to follow Nibali, and Nibali would have to take risks to drop an average descender, but Kruijswijk isn't even an average descender and has a habit of getting dropped on descents and lose significant time.

Kruijswijk was about 4 minutes better than Nibali in 2016 tho. Why couldn't he do that again if in top form? Just needs to not crash this time
Reactions: Sandisfan

Dekker_Tifosi said:
Kruijswijk was about 4 minutes better than Nibali in 2016 tho. Why couldn't he do that again if in top form? Just needs to not crash this time
Click to expand...

That was so much more on Nibali being trash for a few days than on Kruijswijk being some mythical climber.

Red Rick said:
That was so much more on Nibali being trash for a few days than on Kruijswijk being some mythical climber.
Click to expand...