Page 17 - Get up to date with the latest news, scores & standings from the Cycling News Community.
Sidebar Sidebar
Previous Next


ClassicomanoLuigi said:
Gaviria launches from six hundred meters in Paris-Tours, speaks for itself

Allright so because he pulled that number off once, he will forever and ever be the better rider of the two?
H

Ewan has gone well at MSR, I wouldn't say he's a one trick pony any more or less than Gav.
Gav also crashes a lot more.
I look forward to the battle raging on.
S 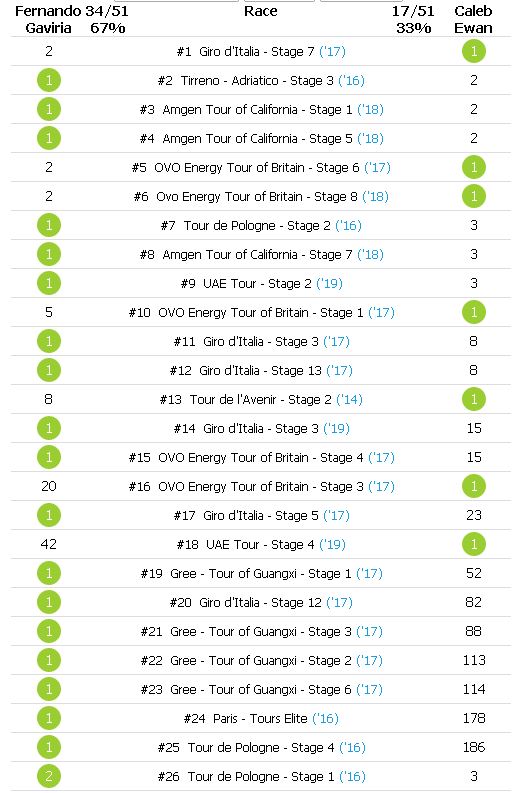 It's not even close, and Ewan has won those TdF stages this year because of the unusually weak field, including the absence of Gaviria, who got injured and isn't there. Photo-finish with Groenwegen in Stage 11 and edging Viviani / Groenwegen by a wheel-length in stage 16

Ewan is a one-trick pony who is also inferior in strategy and style.
Click to expand...

Posts a list where the majority of results are from *** tier races as proof?

Gaviria needs to figure out how to stay off the ground. We're not really getting the Ewan-Gaviria rivalry we thought we might have as it seems like a bunch of the best sprinters these days are young and around the same age. Ewan, Gaviria and Ackermann were all born in 1994 and Groenewegen in 1993. Those 4 along with whoever happens to be QS' top sprinter in any given year should be the top guys going forward but I wonder if any of them will truly separate himself enough to "best sprinter in the world" level.

It was a mistake to not bring Richeze with him this season, or even better just stay at QuickStep anyway. He will be back to #1 next year then.
C

Speaking of 1994 births. Of interest is what a great future reference race the world junior track omnium was in Moscow for this age group and even though they were first year juniors, they dominated the event.

Gold.. Caleb Ewan the most consistent but didn't win any of the 6 events.

Bronze... Dylan Kennett, if you haven't heard of him he won three events in the Moscow omnium, scratch race, kiloTT and flying lap and then went on to be world champion with New Zealand at team pursuit in 2015 and then an Olympian in Rio in the Omnium (8th over all after winning the scratch race bunch sprint for 5th from Cavendish, Viviani and Gaviria in order, then won the KiloTT and Flying Lap ) and also Rio Team Pursuit (4th)

4th... Pascal Ackermann who won the elimination in Moscow

Who says junior track stars don't make the grade as road pros?
B

Yeah, who says that? I dont think most people do, tbh. Plenty of world class riders have a background on the track
C

I wasn't being very serious. I used it as a well known saying in the English language. Maybe I should have added a funny face.

"who says you can't do such and such"
Z

It’s funny to think how much contempt Ewan used to attract. He has just finished his season with his tenth win after winning big in the GTs earlier in the year. I doubt if Lotto are regretting replacing Greipel.
Reactions: jaylew, 42x16ss and Scarponi
S

Zinoviev Letter said:
It’s funny to think how much contempt Ewan used to attract. He has just finished his season with his tenth win after winning big in the GTs earlier in the year. I doubt if Lotto are regretting replacing Greipel.
Click to expand...

The worst part about it was that he was just a kid trying his hardest and people here would absolutely lay into him about coming 2nd or 3rd alot.
Reactions: movingtarget

Scarponi said:
The worst part about it was that he was just a kid trying his hardest and people here would absolutely lay into him about coming 2nd or 3rd alot.
Click to expand...

Or the people who would say he wasn't a GT-caliber sprinter and was more of a crit rider. As if he was a fully developed rider at that age.
Reactions: movingtarget
Y

The facts are that Ewan was hyped and I mean HYPED from the age of sixteen as the next Robbie Mcewan in Australia - He's had tonnes of pressure on his shoulders from the media and the public from an early age and has admirably coped with the pressure -I remember the 2014 Commonwealth games RR and the Aussie press had him as the favorite which was crazy, in which he was totally outclassed by Geraint Thomas - He has had luck on his side in that he's never suffered any serious injuries from crashes or training. It was pleasing to see him win the Brussels Classic in filthy conditions with winds and cobbles - This can only help future racing.

For our collective humility, I bump this.

For a time it really looked like Gaviria was going to be an absolute superstar of both classics and bunch sprints, in comparison to Ewan ending up a middle of the road b-grade one trick pony sprinter.

But man, has Ewan matured. I always kind of believed in him, but even so, I never thought he'd be nailing tdf sprints like he is now. Chapeau.

Will be good to see them both at the top of their game at the same time/same race. It's been a while.....
Reactions: shalgo

Absolutely, but I feel like Gav hasn’t had a great time of training recently. I still want to see Gav in a new year where he is not sick and can train well and see how he does then.

That said, Ewan for now is the better man.
M

Zinoviev Letter said:
It’s funny to think how much contempt Ewan used to attract. He has just finished his season with his tenth win after winning big in the GTs earlier in the year. I doubt if Lotto are regretting replacing Greipel.
Click to expand...

Some people were forgetting his age and inexperience. I always thought he would improve. It took McEwen quite a while to win against the best. Obviously Greipel is in the Cavendish category now, getting closer to retirement, past his best and been that way for a while now. Didn't need much thought to sign Ewan..

Don't think there's much between the two (and a couple others) at this point. I guess it's been that way for a while now. Sure you get small ebbs and flows of form and injury issues but for the most part with the top guys, it just seems to just come down to the day, positioning, and timing.

I guess we'll get to see them head to head at the Giro, especially with Ackermann, Groenewegen, and Jakobsen not there.
U

Gigs_98 said:
Too bad team UAE is so stacked that Gaviria didn't have a spot in their squad so he can beat Ewan again. Anyway, I'm sure Ewan can hardly sleep thinking about his humiliating 114th place in a stage at the Tour of Guangxi he so desperately tried to win.
Click to expand...

This is exactly what Ewan said on the podium.. " glad I redeemed myself today after Guangxi..! That 114th place really got under my skin!! Does anyone have the registration form for next years ToG? "This TDF win really boosts my confidence for really hard races in China
Reactions: Tigerion, stefank and 42x16ss