Page 29 - Get up to date with the latest news, scores & standings from the Cycling News Community.
Sidebar Sidebar
Previous Next
K

Lord of the Rings reference

The 30 Most Important Cats Of 2011
Culture Buzz Cats. They are why we do what we do — why we continue to persevere in the face of a fearful present and an uncertain future. But they are so much more than just the unheralded inspiration for our greatest accomplishments — for instance, they are also furry and they roll around on the floor a lot. Let's take a look back at the most important ones from this year.

on3m@n@rmy said:
Thanks for that link Krebs. Lots of great shots there. Of all those pics here's the cat I thought looked the ugliest. Kind of reminded me of BroDeal's avatar. Ack! Someone gave it the poodle treatment. Who the heck shaves their cat? That is mean.

i think this excrescence was posted in the free form/chaos thread. it is photoshopped. however this one is not. it is owned by a businessman in jogjakarta. 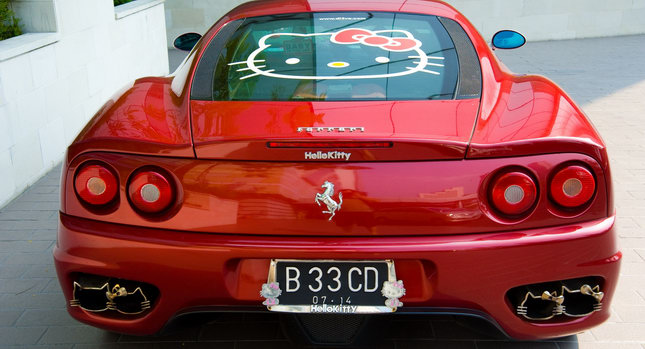 BroDeal said:
Ack! Someone gave it the poodle treatment. Who the heck shaves their cat? That is mean.
Click to expand...

Yeah. And the cat don't look too happy about it either!

Just got back from the vet with kitty. The claw bed on her right front paw is badly infected. Got a shot today and gets another one Thursday.

The hardest part of the whole thing is that she really ought to stay inside until then. Not sure who that will be harder for, her or me!

Keep us posted Susan. One of our cats had a bad paw pad problem, and shots and general care cured him.

Walter is a cat in my home town that needs a home. He's apparently been really well fed over the years, weighing in at a whopping 28 pounds. Free bag of low-cal cat food, and a laser pointer for the family that adopts him. I'm guessing he'll have a new home within a couple of days, as he made the news and was pretty cute and very people friendly, despite being more than a little tubby.

wow, walter could crush you!

my cats bought me a present at 4.22am this morning.
a nice little mouse, they didn't go to the trouble of wrapping it, i guess it's the thought that counts.
G

He does look quite cute.
At the moment my cat is being accused of attacking another cat an NIGHT, even though we always get him in at night.

Our cats bring in massive lizards for us.

Took only a few hours for Walter the cat to get adopted to a new home. Really heartwarming story:

"The 7-year-old cat made a big impression, said OHS spokeswoman Barbara Baugnon. And his notoriety after appearing in newspapers and on television drew a line of potentially adopters before the shelter opened, Baugnon added:

'Three other cats went home with families thanks to Walter.'" greenedge said:
He does look quite cute.
At the moment my cat is being accused of attacking another cat an NIGHT, even though we always get him in at night.

Our cats bring in massive lizards for us.
Click to expand...

we get lizards too, thoguh only little ones.

their little lizard screams are freaky.

looks like walter has got a bit of a zoolander "blue steel" thing going on.

Alpe d'Huez said:
Took only a few hours for Walter the cat to get adopted to a new home. Really heartwarming story:

"The 7-year-old cat made a big impression, said OHS spokeswoman Barbara Baugnon. And his notoriety after appearing in newspapers and on television drew a line of potentially adopters before the shelter opened, Baugnon added:

'Three other cats went home with families thanks to Walter.'"

ohhh that is so sweet. it always brings tears to my eyes...:-0

I havent posted on this thread before but cats are a huge part of my life.

The loss of one during the duvali - bonfire night period 2004 ( a month every year in South West London when hundreds of thousands of thoughtless individuals buy cheap fireworks and send them off at an average of 3 a second per square km, killing thousands of animals who die of shock and from running onto roads and running away) made me depressed for about about 2 years.

Anyway while looking for our lost brother we found a poster in a shelter for a poor 8 month dwarf, who had half her fur burnt off and one of her eyes taken out, by yobs (may they all get cancer) in search of a laugh.

We took on this animal and since then have made our home a bit of a mini shelter for disabled cats as 3 years later we saw another poster for a one eyed cat and took him on as well.

This was our family last year

Unfortunately we soon found out that the grey one, had advanced cancer.

We had only had him for 2 years and this one had been allegedly in a car accident of some sort and was a bit like a vegetable the whole time– sleep, eat and stare at walls all day, rarely express happiness

Anyway despite this we were all very depressed and since my parents could not stomach it, I was the one who spoke on the phone with the vet and who accompanied my mother to the vet as she couldn’t manage it herself.

Yet when it came to putting him down, I chickened out and could not do it, so went to play football as my parents took him to the vet.

This was the photo I took as I said goodbye to him before I left, knowing I would never see him again.

Naturally the only way to deal with the depression was to take on a new disabled cat. We went to the local shelter and this was the best candidate.

She had had a leg amputated and was really struggling to walk. After a while though she has learnt to hobble quite well is quicker up stairs without having to drag the extra limb up and can climb trees.

She can be very scared at times though.

Naturally the new member hasn't been made entirely welcome.

The most amazing of my pets however is the little one with one eye we call (crazy) daizy, a name given to her as an acknowledgment of her spectacularly insane behaviour, which was evident right from the start. This includes severe mood swings and regular moments of rage where she runs full speed back and forth almost like shuttle runs for periods of 10 minutes.

Daizy has absolutely no problem in picking a fight with creatures of any size, Despite being about half the size of the average cat, she terrorises the others, somehow winning fights against even the healthy one, and all the other cats pay special attention to look around corners to make sure she isn’t there.

Cats however are small pickings for this modern day napoleon. She sees nothing wrong with hitting humans, and standing her ground, and one of the most spectacular episodes I have seen was when she ran towards the sound of dogs barking as the other cats were fleeing towards home.

This exceptional courage contrats greatly with a superstitious fear she often gets towards certain objects such as cuddly toys at which she will hiss and run, or even the floorboards at times which she will be too scared to touch and therefore walk around the bed crying for help. This strange behaviour no doubt caused by memories of the horrors she experienced.

One of the many other traits of toatal insanity is her doglike loyalty towards my father who calls her piesek (little dog) on account of the fact that she follows him step by step as he walks around the house, answers his calls of her name with meows and whom she guards at night by laying next to him at night, not sleeping but eye open towards the door, ready to attack anything that comes through.

The final cat, big black and pretty normal (eats sleeps and purrs) has been with us the longest (it was his twin brother who run away), and is the only healthy one in the family.

At least he was until one day 2 months ago he came back home having heroically defended the garden from a ginger intruder, with one of his eye hanging out.

We immediately took him to the vets who operated on him and told us he had a 50% chance of keeping the eye.

Thankfully half a thousand pounds, 2 operations, two months of keeping him in doors and two hours a day for a month spent taking off his protective hat and making sure he doesn’t touch the wound, later, he is on the way to full recovery.

You have a pretty big heart there Hitch. This may not give you much comfort, but know that your gray kitty passed away knowing he was loved.

Wow, HItch, that is so impressive! And a lot of love!

Kitty's paw isn't getting better but probably not worse, i guess. She had another shot Thursday and some pus came out of th wound.

My husband is convinced she is limping worse than ever. I will keep an eye on her today. she has to go in for another shot Saturday anyway.

We gave up the fight and have let her go outside. She stays out anywhere from two to twenty minutes, so it is not so bad.

Wow, what a story Hitch.

Thank you all for the kind comments.
G

That is so sad for all your cats @ The Hitch.

It's good that you care for them though.
My ginger boy Cat ( Russell ) also follows us around like a dog.

I have to leave my poor cats soon ( to go to the TDU ) and am in the meantime comforting them ( a lot ). 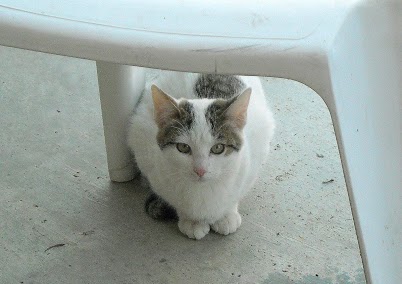