We have cats, and Mrs. Alpe runs a small kitten rescue. Lots of cats and kittens have been through our home.

Read that Chili contest bit before. Funny!
A

IR Pete has only three feet BroDeal said:
There are two types of people in this world: Those who like cats, and those who should have Dave's Insanity Sauce poured into their eyes.

Everyone must have seen this but, just in case. On a ride last week one of those totally annoying little white dogs on a yo-yo leash ran all the way out into the road and I had to swerve way into the other lane to avoid it. If there'd been a car coming I would have been forced, or rather, given an excellent excuse, to kill it. I've been bitten on the calf once during a ride, thrown away a few water bottles hitting attacking dogs, and once my brother-in-law broke a very nice Silca pump over the head of an attacking lab. I don't like dogs.

now that is a comfy kitty

Kitty is very unhappy with the weather right now and doesn't understand why we don't change it for her -- 4 inches of snow, haven't been above freezing in about a week.

We throw her out at regular intervals and she comes back in with cold paws, cold ears and a bright red nose. She has to immediately jump onto someone's lap to warm up, while we make jokes about "Kitty the red-nosed cat-deer."

Susan (who is warming up Kitty right now) 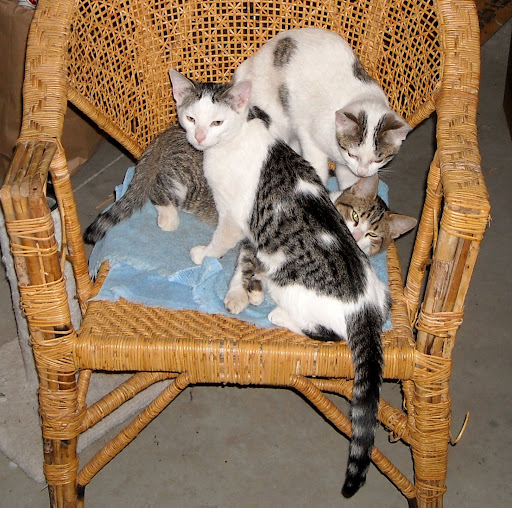 random cats in the garage...

Susan - here's a link just for you and your cat

LOL, that's great, thanks. It's been hysterical to watch Kitty in the snow the last few days.

My husband and son have taken turns tossing her into the snow-covered lawn. Somehow she doesn't find it as amusing as her audience does......

Susan Westemeyer said:
LOL, that's great, thanks. It's been hysterical to watch Kitty in the snow the last few days.

My husband and son have taken turns tossing her into the snow-covered lawn. Somehow she doesn't find it as amusing as her audience does......

I'm going to have to report you for animal crulety!

auscyclefan94 said:
I'm going to have to report you for animal crulety!
Click to expand...

You're just jealous! Fly over here next time it snows and we will throw you in it, too!

A little cat story for those who like cats.

Last March an orange kitten (4 months or so) showed up to our back yard. We have 6 cats (no worries, big back yard, cat door, quiet neighborhood). Well, we didn't need 7. This guy was old enough to get around and would come and go, and seemed to like our cats, didn't hiss or growl like a true feral, so we assumed someone abandoned him after the winter, as there's no way at his age he could have survived the snow last year. He grew some on our cats, who would play with him, and soon we caught him and got him fixed and his shots and let him go.

It didn't take long until summertime and we'd leave the door open and he'd come in an explore (or eat cat food!) until we, or our cats chased him out. In late summer, we didn't see him for a while, and thought someone adopted him or took him in, but when the weather turned to cold rain, he came looking for help.

Well, to make a long story short, after we were able to catch him again, he's now in our house for the winter. He's figured the cat door out - at least to get OUT, but not IN. We'd like it both ways. The problem is, he runs out, then hides for a night and then comes looking for warmth, food, etc. and will sit at the outside cat door. And it's hard to grab him. So for now, he's pretty stuck in our office here, and doing quite well. Our cats are okay with him, though my hunter-gatherer cat that brings me a bird or mouse (or snail, worm, stick, twig, leaf, pine cone, tomato from vine) once a week or so growls and hisses at him but doesn't fight him. I can now pick him up, hold him, carry him around, and he's trying to figure out how to sit on my lap on his own. He seems to know he's wired for it, but is reluctant to jump up there.

It's hard adopting out cats that are 1+, and not completely domesticated, but we're going to give it a shot as he improves.

Alpe d'Huez said:
A little cat story for those who like cats.

Last March an orange kitten (4 months or so).
Click to expand...

+1
My first cat was an orange tabby. A great friend for the 12 years of her life. 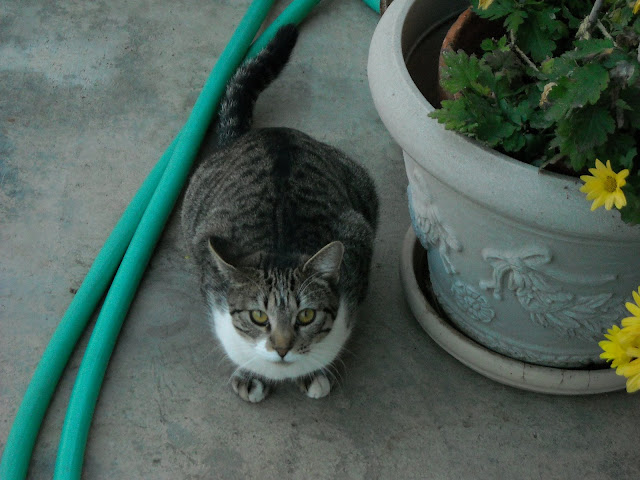 Alpe d'Huez said:
It's hard adopting out cats that are 1+, and not completely domesticated, but we're going to give it a shot as he improves.
Click to expand...