Page 2 - Get up to date with the latest news, scores & standings from the Cycling News Community.
Sidebar Sidebar
Previous Next
D

Moncoutié was a rider whose company I always appreciated in the peloton. I remember a big mountain stage at the Tour de France, don't remember exactly which year but it was during the Armstrong period, when the peloton had blown up into pieces and I had a hunger knock 15 km from the MTF. Although he wasn't in my team and he could have dropped me any second, he rode with me until the finish line and encouraged me on the toughest parts of the climb. Great man, and not just because of his staunch anti-doping stance.

This day had to come eventually. Let's hope cycling can find another rider with the same profile, a rider in love with the mountains jersey who always gets into breakaways to look for a great win. 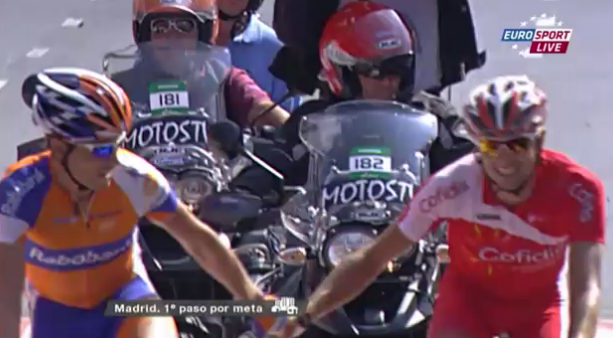 A very well deserving and heartfelt tribute. Thanks Arnout!

Good luck David in the future and we know that you will continue to share with us in your simple joy of riding your bike. I think that is what I appreciated and identified the most with Moncoutie.

One of the true characters of the sport. A guy who, when he started out, had to stop to put on a rain jacket; a guy who trained by riding around Parisian parks even as he specialised in the mountains; a guy who allegedly turned down even Vitamin C pills from team doctors, saying (paraphrasing) "if I want Vitamin C, I'll eat an orange". One of the sport's real good guys, and it will be weird to see the péloton without him. The thread in the clinic was full of even some of the most aggressively "everybody dopes" type of posters defending him.

Of course, what made Moncoutié well known, other than his forays in the mountains, was the faith with which most people treated him as a clean cyclist; but while he will be remembered as one of the true bastions of clean cycling during some of its darkest times, he should also be remembered as somebody who simply loved cycling. There are lots of characters who are driven purely by victory, success and get involved in conflict, arguments and so on. Bradley Wiggins admitted that much of the Tour de France really wasn't fun for him... Moncoutié rode because he enjoyed himself. He carved himself a niche; a good one too. And that was where he was happy to be, and that was where he stayed until finally reaching retirement. And his style and panache in the mountains was great to behold. Nobody ever begrudged Moncoutié any victory, nor should they.

Nicely written intro Arnout. I lost myself reading it in a very pleasant space...I wish there were more poetic riders like him.
It will be sad to think of a peloton with no Moncoutie in it.

I guess all good things move on.
Very bittersweet day.

Thank you for starting this thread.

Moncoutié and his beautiful pedal stroke will be missed

Sad to see him go, he was one of my favourites.

Bye David. thanks for everything

Nice to read a quality piece on CN for a change

luckyboy said:
Sad to see him go, he was one of my favourites.

One of mine too,terrific rider and by all accounts a terrific guy.

I wish him good luck in his career after cycling.

I wish him good luck in his career after cycling.
Click to expand...

Certainly one of the good guys in the peleton. I always enjoyed his smooth, almost languid climbing style. He made climbing montains look very easy when in his best form.

The very definition of class. He was my favorite rider; will sorely miss him.

I like hrotha's definition of him last year ..doping wise "he is our dear international prototype rider" or something along these words.

No propaganda. Facts needed to make those who fail to understand what Moncoutie had to ride against.

Would've like to see him have a go in the Giro D'Lombardia but however the best to Moncoutie for his future.
F

A true legend. Would like to see him in some team role in the future maybe.
S

I was in France last month and bought the weekend Equipe magazine that had a great piece on Moncoutie. I always liked the guy, and generally knew of his 'reputation', but the piece was so human, and so far removed from what I typically think of as an elite athlete - driven by the need to win, to be the best, to be in shape to beat the rest. One of his quotes translated to 'I like to ride in the peloton because it keeps me in shape, to see the scenery, and to get some sun'. Amazing.

Whereas some riders (Andy Schleck, Jurgen VDB come to mind) want to focus only on the Tour because it's full of glory, Moncoutie hated riding the Tour and loved riding the Vuelta because it was more relaxed, and he got to feel like a cyclotourist most days. In the article I read, he also detailed how it really was him against himself, him against the mountain, on the days when he was in a break.

A truly grounded perspective from an elite athlete. I wish the whole peloton had his attitude - it sure would be funny to see a whole peloton fighting to not stay at the front. Only a character as unique as Moncoutie could lead from the back of things. Chapeau, monsieur.

The Hitch said:
A true legend. Would like to see him in some team role in the future maybe.
Click to expand...

No way. Moncoutié is happy to leave the cycling business and will surely not come back.

“It's not too bad,” he said of his 13-year career, “especially taking into account my huge weaknesses. I'm catastrophic in the sprint, so if I want to win I have to do it alone. I am a very bad descender, and I hate it when there’s contact or when there’s bumping. But I still have some beautiful victories in major races.

“To have this palmares with all these flaws is pretty good.”

Interesting guy. Classy rider, classy human being. One of the few athletes deserving of "role model" status. His strong character is worthy of admiration. David Moncoutie, I salute you.
H

That was a swell write up Arnout - spot on.

I came to appreciate David Moncoutie in the past few years watching the Vuelta. David was a master of all aspects of the long break. He did not appear to have a edge, he went about his business in a non-threatening manner. No preaching, just riding. Leading by deed rather than word. In pro-cycling it can only hurt to have enemies, for a break must be allowed to succeed.

Far from lazy, he was a calculating rider who studied the race. His four KOMs from the Vuelta were not accidental.

In addition to his legacy of accomplishments, David managed to get it done without going negative, avoiding the pitfals of envy and jealously, and stands as an example for young riders with the same principals and passions.

Thank you David for your spirited riding!

I, too, shall miss him, especially those lovely glides out of the pack and up the mountains to collect his KOM jersey. A classy rider in an era that has been decidedly lackinf in class acts.