Teams & Riders The wright time for a thread dedicated to a rider clearly made of the wright stuff: Fred Wright

Surely this guy is going to have success in the future? Or is he doomed to be one of those guys who are there or thereabouts?

South London boy - he was a member of the VC Londres cycling club (You might recall them from the Zwift advert for the TDFF) he certainly has a large following amongst them. & two cool things I've just realised: We were both roadside spectators of the Tour in 2007 & he was probably one of those kids who used to zoom past me whilst cycling around Richmond Park. Also, as a junior he was able to beat some future stars: Future stars

So, whats next for this guy? What's his future ceiling?
Reactions: Didinho, Carrick-On-Seine, Sandisfan and 3 others The renowned writer and translator describes life as a passionate polyglot.

DAVIS: Again, we get back to the lack of being systematic. For one thing, I didn’t like to give out a curriculum at the beginning, “This is what we’re going to do every week till the end of the term,” because I never knew. I liked to see what they needed or see what I was reading or see what occurred to me, and give the next assignment based on that rather than something I had already decided. That was one difference.

That led to some very fun things, like I myself was trying to think of all the words that begin with wr. This was just something I happened to be doing walking around the house, realizing there weren’t very many of them.

I thought, “Okay, I’ll give that as an assignment next week. The students will have to think of all the words they can that begin with wr. They’re allowed to ask other people, but obviously they’re not allowed to look online or in the dictionary to find them.” That was a lot of fun because we also realized that all the words beginning with wr, except for one in the Cornish language or something, had to do with twisting: wrench or wrist or wrangle.

COWEN: Wrong. Why is that?

DAVIS: That’s the kind of thing I love. I can’t really tell you why, except that I’m sure if you go back to the Indo-European or the Gothic or go way back, you’ll find it there. The answer is there somewhere.

I sometimes think that the sounds are related to the meaning in the sense of ma, ma, ma, ma, ma. The M is good for mamama. But WR, I’m not sure, raaah. Is it something to do with that? That’s a bit of a mystery. I don’t think I ever went and really tried to answer that. But I like having these discoveries. I liked, I should say in the past tense, having these discoveries with the students and having that freshness, like I didn’t plan it. I haven’t done that with the students every year from time immemorial.
Reactions: Sandisfan
H

I think Fred has done something unique
He is getting more popular for not wining than for wining
Everyone is rooting for him to win now ...

He just needs to stop desperately chasing the win and it will come
Reactions: Sandisfan

The writing of Wright's wrath is on the wall.
Reactions: Sandisfan

He has to be the best rider in the peloton still waiting for a pro win, surely?
Reactions: Sandisfan
P

gotta be willing to lose to be able to win.

Devil's Elbow said:
He has to be the best rider in the peloton still waiting for a pro win, surely?
Click to expand...

Strong as an ox but not very race smart. At least not very cool in the finish. If he improves on that, I think he has a great future ahead of him.
Reactions: Kafviar
W

Hugo Koblet said:
Strong as an ox but not very race smart. At least not very cool in the finish. If he improves on that, I think he has a great future ahead

He is on a fasttrack learning course every other day.
Click to expand...

Wright sure gained in popularity ever since Roglic pointed at him as the one who prevented his Vuelta win.
K 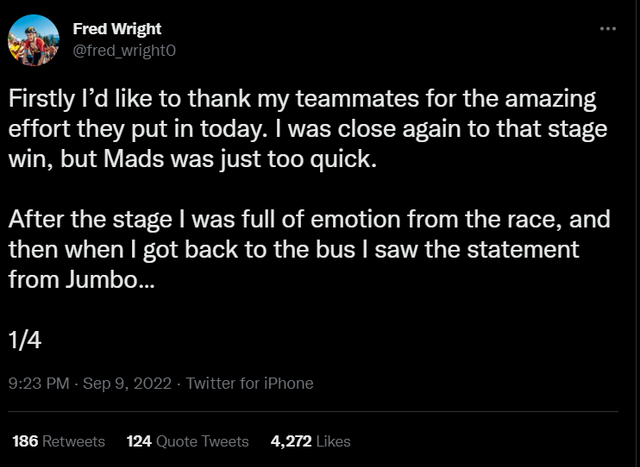 He seemed somewhat "out of it" - for lack of a better term - in the recent interview with him.

RedheadDane said:
He seemed somewhat "out of it" - for lack of a better term - in the recent interview with him.
Click to expand...

They just showed that on The Breakaway and I think he handled it quite well. He’s obviously a bit stunned by it all.
Reactions: RedheadDane

Carrick-On-Seine said:
They just showed that on The Breakaway and I think he handled it quite well. He’s obviously a bit stunned by it all.
Click to expand...