Page 41 - Get up to date with the latest news, scores & standings from the Cycling News Community.
Sidebar Sidebar
Previous Next

Just watched this breathtaking stage on a delayed signal. This is cycling on the finest shelf.
And no wonder a tidal wave hit the forum.

Must say, that after Aru chose to abandon and then Formolo too later, I though the TJV-train would rumble all over.
But Pogacar proved me wrong. What an incredible performance.
Reactions: Sandisfan, PlanZ, LaFlorecita and 1 other person

Red Rick said:
You have a minute lead in a GT with a guy who has like 7/10 last ITTs he's done and who put 1'30 into the 2nd guy the last GT ITT they did vs each other.

It's like I'm supposed to trash Contador for not dropping Schleck on the 2010 Tourmalet despite being the better ITTer.

Dumoulin might have been 90 seconds closer if he doesn't commit harakiri on the Peyresourde. Then what. He didn't have the legs to attack most of the Tour, yet he's supposed to attack in case the non ITTer wins the ITT by over 1'20 on everyone?
Click to expand...

You asked where his chances were to put more time on Pogacar, I answered, now you say my answer wasn't good because Roglic had no incentive to attack Pogacar. But that wasn't your original complaint. Stop pisti'ing me.

tobydawq said:
I placed a bet on him at odds 15 to 1. Sadly not much money. All my other pre-race bets failed.
Click to expand...

It must be said though that usually my bets are a total Rabofail
Reactions: Sandisfan and PlanZ

Pogacar turns 22 at midnight, during the team party tomorrow night
Reactions: Sandisfan, UselessToo, BlueRoads and 2 others

Pogacar turns 22 at midnight, during the team party tomorrow night
Click to expand...

Should definitely test him for alcohol then.
Reactions: Sandisfan, Tonton, Zoetemelk-fan and 1 other person
A

Nothing against TJV, I like them quite much actually, but I'm super happy that being so passive in the mountains backfired on them and Pogacar won. I preferred the way Sky were using their train in the mountains- always trying to destroy the peloton at least once in the race- much more. Jumbo just kept everything together. Hopefully Roglic will not have so much trust in his ITT anymore and will approach future GTs more aggresively.

Incredible that Porte has managed finally managed his podium at the dusk of his career, after all of his failures and misfortunes. If 4-5 years ago there still had been people who had believed in him, I'm sure most of them have lost hope by now, but he did it!
Reactions: Sandisfan, UselessToo, DenisMenchov and 5 others

gunara said:
This Tour will be fun too rate, extremely boring to so so mountain stages and above average to great everything else.
Click to expand...

It's not like Pogacar won by riding super risky and ultra aggessive lol. He was really aggressive for 2 stages in the Pyrenees then somewhat aggro on on the Puy Mary and that's it.
Reactions: LesDiablesRouges and Sandisfan
B

Pog just made huuuuuuge gaps on that final climb onall the favorites.

During the stage today, before Pogacar had started, the Danish commentators talked about how the loss of Kruijswijk had proven to be inconsequential
Reactions: Sandisfan and perico

gregrowlerson said:
Probably better than the 2012 Tour.
Click to expand...

Definitely a lot better than the 2012 Tour..

A bit above mediore in my estimation (on a TdF-scale, not Giro lol), but will be interesting to see what the people vote!
Reactions: Sandisfan

I miss one day and something like this happens. Well done Pogacar!
Reactions: Sandisfan

gregrowlerson said:
Probably better than the 2012 Tour.
Click to expand...

Red Rick said:
It's not like Pogacar won by riding super risky and ultra aggessive lol. He was really aggressive for 2 stages in the Pyrenees then somewhat aggro on on the Puy Mary and that's it.
Click to expand...

But Roglic looked stronger than Pogacar in the Alps, in Glieres he could have gained some time for instance.
Reactions: Sandisfan

Frihed89 said:
The mighty have fallen (more or less): Roglic, Bernal, Quintana and Yates. On the other hand, Porte, Linda, Mas and, of course, Pogacar moved steadily up through the GC.
Click to expand...

I suppose he is rather good looking
Reactions: perico and Tonton 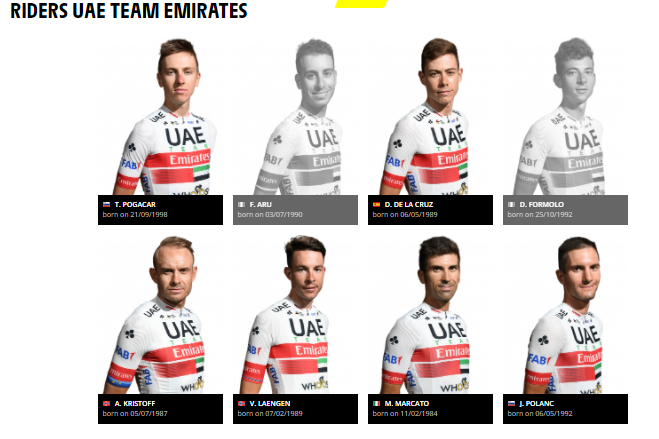 Dammit, Aru will miss a career defining party in Paris.
Reactions: Sandisfan, ppanther92, bob.a.feet and 2 others

gregrowlerson said:
I did that as well. Also won a bit more than that with Porte top 3 (pre tour start at 20-1)

It must be said though that usually my bets are a total Rabofail
Click to expand...

Surely Jumbofail is a good name for this now

Still has had yellow for longer than Pogi tho
Reactions: Sandisfan, perico, SafeBet and 3 others

Well, the 2011 Vuelta stage 10 was at least as surprising.
Reactions: Sandisfan

Red Rick said:
Why don't people give me the 19 chances Roglic missed to drop Pogacar.
Click to expand...

Some low-hanging fruit:
Stage 8 to Loudenvielle: follow Pogacar on Peyresourde, or at least try harder to limit the losses. Potential: 38 seconds
Stage 9 to Laruns: too much pulling by Roglic in the last couple of K's. He pulled his biggest competition (Pogacar) to take more time on the likes of Uran, Bardet, Porte,... Potential: only the bonus seconds (2 or so if he won the stage instead of Pogacar)
stage 13 to Puy Marie: so much good work by the team, only to NOT take any bonus seconds and allow the break to take them. No real attacks by Roglic. Potential: some bonus seconds
stage 17 to col de la Loze: it was clear Pogacar was pumping from before the last K. No real attack until it was too late to take significant amount of time. Potential: 10-15 seconds more.

edited by mod
Last edited by a moderator: Sep 19, 2020
Reactions: Sandisfan, SafeBet, DFA123 and 1 other person

Red Rick said:
Why don't people give me the 19 chances Roglic missed to drop Pogacar.
Click to expand...

BTW, any room over at the HC, or you already booked out?

TomLPC said:
No, but the Vuelta 2011 stage 10 one was pretty shocking

""I wasn't really expecting that," Froome said at the finish. "

"I was just trying to stay in contention and be there along with Bradley Wiggins, the team leader. I just had a fantastic day and somehow I've ended up in the leader's jersey. It's a dream come true."

He says, tongue firmly in cheek
Click to expand...

Beat me to it.

Riders who have won Tour de France and another 2 additional jerseys in the same Tour:

When he didn't attack Froome after the latter crashed on Montevergine di Mercogliano in 2018. He should've known what was coming.
Reactions: Sandisfan

According to my pocket calculator, Tadej Pogacars VAM number on last climb was 1867.
Three weeks within Le Tour.
And including a bike change,
Reactions: Sandisfan, jsem94 and Big Doopie
You must log in or register to reply here.
Share:
Facebook Twitter Reddit Tumblr WhatsApp Email Link