Page 58 - Get up to date with the latest news, scores & standings from the Cycling News Community.
Sidebar Sidebar
Previous Next
A

To Øl, Babushka: Barleywine brewed with plums and figs and aged in port barrels. 13.5% The idea stated by the brewers was to create three layers of port: the barleywine base, the fruit and the aromas and sugars of the barrel. This bottle poured a rich head, color a muted garnet ( for those who care). All kinds of fruit flavors--cherry and whatnot--some coffee as it warms. This is sweet, but neither candy/fruit up front nor the cloying bite of some barleywines. Very balanced and hides its strength nicely. As to the brewers' goal it sits between a tawny and garrafeira port. Reading the last couple of pages is hilarious (my wife has her usual facepalm while laughing pose going on).

Anyway, going to drink some beer this afternoon for the inauguration of a deck I helped my buddy build by the river this last week. Heavy work actually as he way overbuilt it with material he had on hand. 4X12 - 12 footer old growth fir beams are beasts. 2X6 12 foot red cedar (undressed) boards for decking are no laughing matter either. Brick sh!thouse building. We had a good time, drank a few along the way, turned out pretty good all things considered. Time to hit the liquor store for a pic-nic.
hmmm...
http://beermebc.com/bc-breweries/
A

This may do it:
http://brassneck.ca/one-trick-pony-smash-ipa/
A

It is interesting in terms of beer selection that some recent posters would likely be drinking it regardless, but feel empowered by their new options and yet don't have much to say. Geographic accident isn't really "taste".
A


ferryman said:
There are very few pubs in that "70s abyss" and you'll mostly find them in Scotland.

Some of the best wee breweries and beers in the world are from Orkney to Kelso. Been enjoying real ales in most of Scottish pubs for 30 years.
Click to expand...

Didn't get back to you on this, no: still loads in London and Belfast. To name a couple. I'm in for a wee heavy anytime, but that was not a consensus.
S

What a delightful transitional beer for late summer early fall. I don't entirely agree with the description (above) though it's hard to pin down. Upon first tasting: Orange? Hefeweizen? Saison? I've decided, half way through my first, that it pops pleasantly of apricots with a smooth ale finish. Very balanced and drinkable. Good fall drink.

Soon enough it will be time to move onto a winter favourite:
http://beermebc.com/2012/10/02/driftwood-brewing-co-blackstone-porter/
(I more or less agree with this review. The choco. coffee is subtle enough that it doesn't smack you in the face like a coffee crisp though).

I really need to explore the local sour craze that's taking hold instead of buying Belgian Geuze - Lambic style (my favourite summer beer for a couple decades). I've tried a few local brews and they vary but they don't have that deep earthy undertone after the initial sour punch of the Belgians. Traditional Lambic brewing (if it could even work) would be shut down in seconds in Canada, cobwebs and all. The locals are faking it but they're getting better at it.

Had me one of these yesterday

The smell is really fruity. The taste is not as sweet as some other Quadrupels (it's nothing like a Rochefort 10 or something) and it's a bit more like a fruity type of sweet than like caramel. For me the taste of alcohol is just a bit too strong, but that's more of a personal preference. The aftertaste is a little bit bitter. It's been a long time since I had one of these, but, to be fair, while it's an amazing quadrupel, it's not my favourite, but that's more due to personal preference (I like the sweeter quadrupels like Rochefort better); the beer has a very complex taste and it generally gets amazing reviews. If you like dark and strong beers and you haven't tasted this one yet, it's definitely a recommendation.

Also, this uses the same recipe as the famous Westvleteren, but it's a hell of a lot easier to get!
A

In a moment I'll take a Duvel Tripel Hop. This is a good example of the extra hop style beers that have been popular in Belgium recently, presumably after the example of the US microbreweries. Duvel is a well established beer that has been popular in Belgium and beyond for quite some time, being brewed first in 1917 (it's changed a bit over time though and only in 1970 did it have its current shape).
Somewhere in the 21st century they launched a 'Tripel Hop' version, with, as the name suggests, contains three kinds of hop. They did an extra hop version before in 2007 and 2012, but since 2012 they have been breweing a version every year, changing the third type of hop that they use. Since 2012 they've also been using experimental American hops (for 2016 they've used this apparently https://ychhops.com/varieties/hbc-291).
This also makes me realize how fortunate beer lovers in Belgium and to a lesser extent also the Netherlands are. A nice brewery with an iconic eponymous beer that's sold everywhere, even in supermarkets, is great already. But even their extra hop version where they experiment with different hops every year is sold in most supermarkets in Belgium and the Netherlands!

Also, if you like hops, this is definitely a recommendation. I'm starting to get kind of oversaturated with hops due to the recent IPA hype in the Netherlands and Belgium, but this one remains very nice (and it doesn't really remain, because they have a new one every year)
A

BFM Procrastinator; blend of half frozen ice bock aged in McVin and Rum Barrels; brewed in Switzerland; 9-10%. Dark, pungent, resinous and syrupy, but near oil rather than sludge; fermented prunes and cherries with all the malt funk and straight sugars frozen out. Think a sour fruit red, aged and darkened up with all the elements pushed, strengthened and mellowed to the edge of overall cohesion and the smoke tang holding down the sweetness.
A

A supping ale then I do like the sound of it though! Do any of the big supermarkets stock it do you know?
A

Not sure. It was tapped at a scandi place. I'll ask and let you know.
D 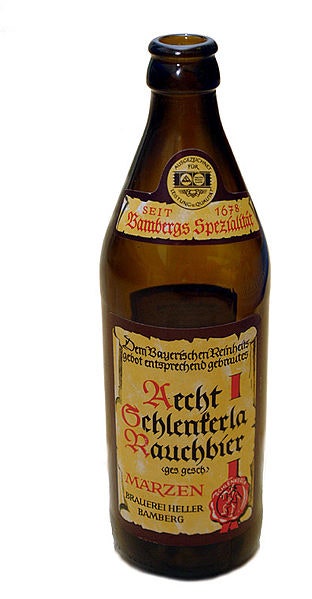 Really good, found a shop while visiting London that stocked it, so bought a few bottles, sadly only one left
A

Schenkerla is excellent. Try Five Points if you see it fresh in London.
D


aphronesis said:
Schenkerla is excellent. Try Five Points if you see it fresh in London.
Click to expand...

Not often down in London though.
A

Smoked porter. If in London hit the Kernel in Bermondsey though.
S

^ Porter? Why are you drinking all these old, hand crafted beers anyway? What kind of peasant are you? This is the 21st century man. What's next? Hand crafted cheese? Blown glass? Timber frame construction? Hand made Czech. wood marionettes? Acorn fed ham? Paintings even? What a slippery slope.

Maybe you should stick to good 'ole American Coors or Bud. It's ultra modern. All head, no heart and as few hands as possible.

edit - I was drinking loads in Vancouver on the weekend (lots of Guinness, among many other types) along with eating acorn fed ham and much Asian. Hilarity ensued wherever I went. I'm glad to be back to my misanthropy though. :lol:
A

Oh look: it's buttpkug. Got some beers saddo?