Page 69 - Get up to date with the latest news, scores & standings from the Cycling News Community.
Sidebar Sidebar
Previous Next

Sounds like he's taking a page out of Valverde's playbook instead of Contador's? Make it sound like you aren't very good thus lowering expectations (or at least trying to) then when you do well everyone (or at least your fans) are happy?

Maybe, just maybe: it is what it is. He's feeling the effects of the crash. I hope he's fit for the tour. I don't want anyone saying he would have won. We nearly all know Remco would have won.
Reactions: wheresmybrakes, JosephK and Rollthedice

Is there a silver lining for Roglic? He did look very banged up after that crash (yet still strong enough to finish with Pinot at the end of the stage). Not feeling great may keep him from training too hard in the week leading up to le Tour. Maybe it costs him some form up front. Maybe he ends up stronger in week 3. . . . It's hard to say.
Reactions: Sandisfan

He just wants to have an entertaining stage 2. Saying he is still feeling the effects will maybe prompt people to test him already there.
Reactions: Sandisfan
C

Roglič usually doesn't bluff. Therefore if he says recovery is slower then expected, likely that is the truth.

P.S. As he is a fighter lets hope for the best.
Reactions: Carols, Sandisfan and JosephK

According to Dumoulin Roglic has a habit of talking about how *** he is during a race before dropping everyone.

Not sure about that, maybe inside the team. When talking to the media and to the outside world, Rogič usually doesn't try to run away from the favorite position or to make excuses. Roglič sometimes does mention he behaves differently, concerning the inner team dynamics, compared to the communication to the outside world. Hence if he is saying he still suffers from the crash i don't have any particular reason not to believe him.

P.S. The good thing is he was in great shape already, before the crash, and the crash could prevent him to peak too early! But likely not, he likely would be much more happy to train at full intensity ATM. That is just how he rolls.
Reactions: Carols

He could also simply mean that it hurts, not really that it's gonna really affect him.
Reactions: Sandisfan
C

An anecdote i read somewhere. Roglič crashed severely and did hurt his eye on a race. Going home, he told customs officer his girlfriend Lora did it. Gave him the black eye.

Moral of the story, we get about 20% of Roglič, through media.
Reactions: Koronin, Jspear and Sandisfan 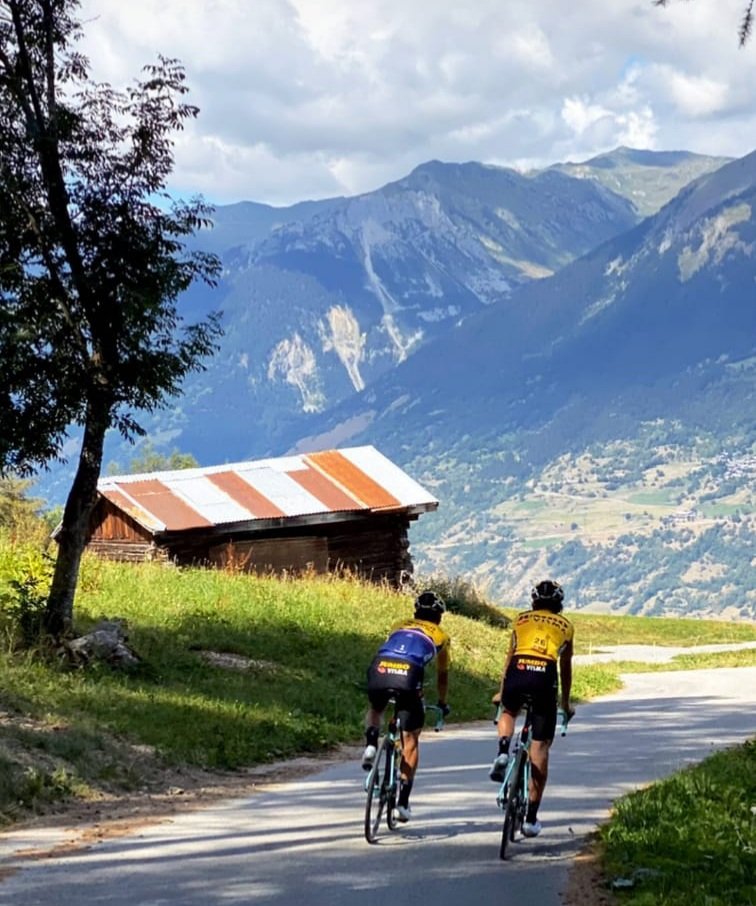 Slovenia is on a roll.
C

Looks like they are looking at the mountain road ahead. As there is likely where they are going.

Cycling News just published an article saying Roglič's start at the TDF is not a sure thing. Link-- https://www.cyclingnews.com/news/primoz-roglics-tour-de-france-remains-in-doubt-despite-return-to-training/

What's not clear is whether the "new" information (from a conversation with his partner Lora Klinc) was from an interview taken this Monday (24 August) or last Monday (17 August). An excerpt from the article based on team information doesn't seem to leave doubt about his starting:

According to reports in the Netherlands, Roglič has recently returned to full training and is expected to study the hugely important 17th stage mountain finish on the Col de la Loze today.

“Lora was with Primož last week on Monday and Tuesday and he was not quite back to his best,” Zeeman reportedly told AD. “As soon as training became serious again, he participated in everything. Thanks to the good work of our medical staff, he can train fully.”

Zeeman explained that Roglič will remain at altitude until Wednesday, while Dumoulin has already descended to Nice for the Grand Départ of the Tour de France.
C

Yes, i have been following such information in local media. Basically the crash was a rather severe one, but hopefully Roglič will migitate the consequences, by the time the Tour starts.

Apparently he's still at altitude in Tignes, while Dumoulin is already in Nice at the start.
Reactions: CyclistAbi

True. Zeeman said that they noticed that Primož prefers to stay at altitude as long as possible and responds best when coming straight from altitude to rscing. Plus he probably wants to catch up on some training days he missed last week. Gesink left a couple of days ago already to have a little family vacation in Monaco while Kuss left this morning.

Red Rick said:
And the biggest one of all.

Stops ski jumping because of a crash. Becomes one of the best in the world at something completely different
Click to expand...

I had no idea he was a ski jumper (joke).
Reactions: Sandisfan
C

Talking about Lora, apparently when Primož talks about watts, she pretends to listen.
Reactions: Sandisfan and Carols

perico said:
I had no idea he was a ski jumper (joke).
Click to expand...

Lanterne Rouge has it he's a former cricket player
Reactions: Koronin, Sandisfan, CyclistAbi and 1 other person
I

We may discover he's actually a poker player
Reactions: Koronin and Sandisfan

ice&fire said:
We may discover he's actually a poker player
Click to expand...

He was just balancing his range, true GTO move
O

CyclistAbi said:
Looks like they are looking at the mountain road ahead. As there is likely where they are going.
Click to expand...

No, he's really hurt. He's just riding the downhills for training now......
I