I'm sharing this nice video of the sterrato sectors made by a Cicloweb user on Saturday. Obviously in Italian but the pictures speak for themselves.

Weather should be partly cloudy, so might be the first stage without any rain or storms.
Reactions: Sandisfan

Eclipse said:
Dropped is no longer an allowable term.

You can use the term dropped for the tour (unless Remco rides) but you only get the chance to use it 2 or 3 times. The giro is a better race where we can imagine riders getting dropped on most stages.
Reactions: Sandisfan and jnormanroach

SafeBet said:
So I've given it a lot of thought and this is my preview for tomorrow's stage.

5 minutes after the official start PCS reports that a large break has formed. It includes Marengo, Gallopin, Pellaud, Battistella, Sagan, Marengo and Bennet among others. Poeple on the forum make silly jokes about Marengo having a secret brother or whatever. I laugh.
With 70 km to go the peloton starts the first sterrato sector. Remco crashes immediately. Logic goes loco and complains about DQS not properly warning Remco over the radio. RedheadDane asks him how he can be sure they didn't warn him properly. For the following 10 minutes they indulge in semantics until Red Rick makes a geek joke and we all start focusing on the race again.

Meanwhile the break has been caught but Sagan attacks again and goes solo. Remco had to change bikes and is chasing 2 minutes behind, peloton goes fast because the fight for position before Passo del Lume Spento is furious. As soon as the climb starts Formolo attacks. Formolo is also known as Roccia (literally rock) so he feels at home on these roads. He's a bit leaner than The Rock though. Formolo bridges to Sagan and they gain one minute on the peloton. Ineos is pushing the pace and many complain that they should wait for Remco. But he's not in the maglia rosa so people complain a bit less than usual.

At the end of Passo del Lume Spento the peloton is in pieces. Ciccone is 30 seconds behind. Yates and Buchmann one minute behind. Carthy almost 2 minutes behind and Bettiol is not with him. At first he tried to help him but then a fellow Tuscan fan on the road shouted at him: "Maremma maiala , sei proprio una fava" (no translation available) and he got back to the front. Evenepoel is somewhere in between these guys but he was going so fast that the moto lost contact to him. There is no information on Dan Martin. Moscon keeps drilling it for Bernal. Gaps get bigger. Only Bardet, Vlasov, Soler, Bettiol, Quinten Hermans and Masnada (finally living up to the hype) are in the group. Sagan is also there after being dropped by Formolo who leads with a 30 seconds advantage.

They are about to hit the final sterrato sector when Remco finally regains contact. He has not eaten or drunk anything for the past 90 minutes, but he looks fresh. He passes the group at double speed and goes chasing Formolo. Final sector starts, Remco crashes again, Lefevere personally informs the forum members that he indeed warned Remco but the Belgian prodigy allegedly ate his radio when hit by a hunger knock a few minutes before. Masnada gives him his bike which makes Remco less aero than normal but he still chases like a madman. He's one minute behind when Froome enters the race and tells him to follow his lead: "this will be your Finestre", he says. The sterrato opens in front of them like the Red Sea for Moses. They pass rider after rider and get back to Bernal right on top of the climb. Only Formolo is ahead.

Froome disappears. But Nibali appears out of nowhere with a bionic left arm. He can finally get out of the saddle but unfortunately the climbing is over. He doesn't care though, he descends out of the saddle and drops both Bernal and Remco. He bridges to Formolo and outsprints him at the finish. Gazillion jokes about the bag. I don't particularly laugh. The end.
Click to expand...

Was getting more and more worried while reading your post but then Nibali appeared in a "colpo di scena" and all good. Here's a pic from the finish line with Formolino: 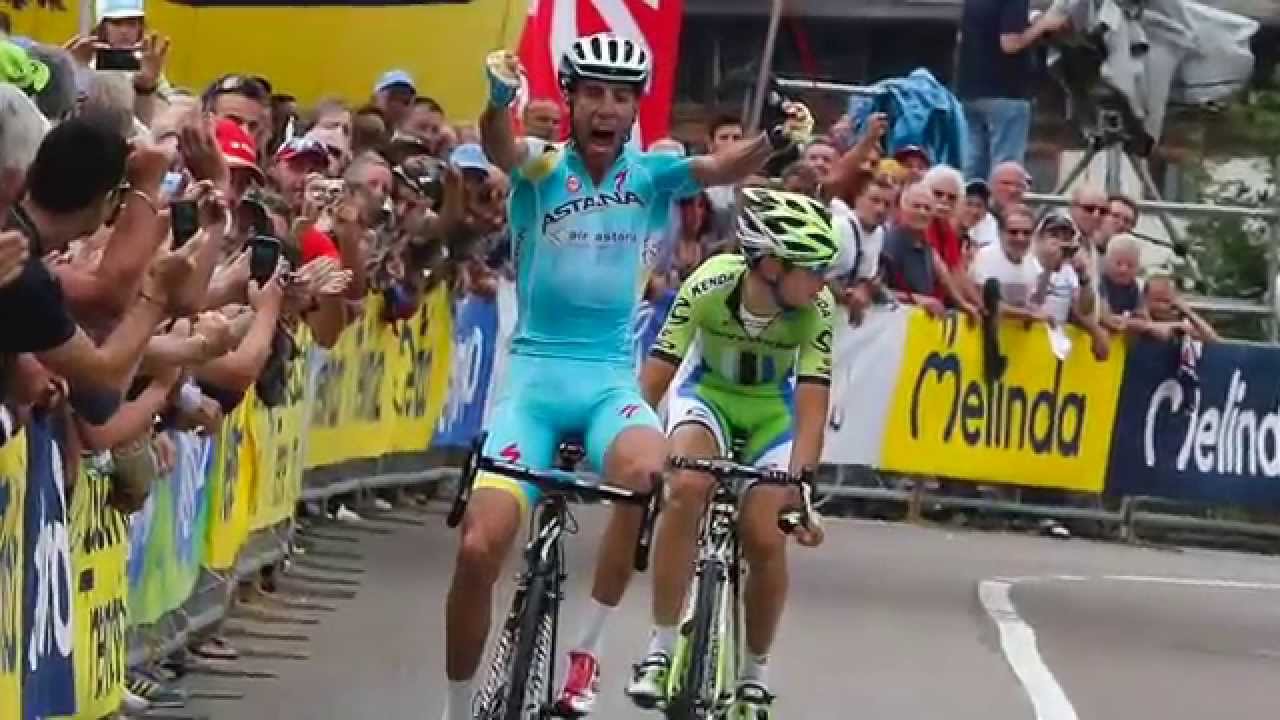 Serry has his work cut out tomorrow to ensure Remco doesn't get dr***ed.
Reactions: Sandisfan and spalco

From now on, forum code should *** word "dropped" whenever it detects it's coming along with "Remco Evenepoel"
Reactions: Sandisfan, DoYouEvenRideBruh and Valanga
A

Big Doopie said:
but who are these TT strong guys who compete for GC these days? They are few and far between. Nearly all of the GC people are now small climber types. It used to be the reverse.
Click to expand...

Well, yes. Because the GTs are tailormade for them. Don't you think there's a correlation between route design and the physique of GC riders? It's not merely random coincidence...
Reactions: DoYouEvenRideBruh

Big Doopie said:
In 1975, the main contenders at the start were Merckx, Gimondi, Thevenet, Ocana and Zoetemelk. Each of those riders could win a TT as well as a mountain stage. Van Impe was considered too much of a climber but reached his first podium. Why? Because he actually could TT pretty well. He finished third in the flat prologue behind Moser and Merckx. And won a long TT, albeit a very hilly one. I mean, seriously, can you imagine Bernal finishing third in a flat prologue, or Herrera, or Fuente?

top three in 84 and 85? Hinault, Roche, Fignon, Lemond. All riders who won mountain stages and ITTs. Herrera wasn’t even considered a threat. Delgado only became a threat once he started to top five in ITTs.
Click to expand...

We need Tobydawq to start a second thread for this stage because this one got lost somewhere along the way!
Reactions: Sandisfan and RedheadDane

Sciatic said:
We need Tobydawq to start a second thread for this stage because this one got lost somewhere along the way!
Click to expand...

Or perhaps we needed a rest-day threat posted two days ahead of time
Reactions: Sandisfan and RedheadDane

Sciatic said:
Or perhaps we needed a rest-day threat posted two days ahead of time
Click to expand...

A "hairstyles" one?
Reactions: Sandisfan and Sciatic

Sciatic said:
Or perhaps we needed a rest-day threat posted two days ahead of time
Click to expand...

No threat of a rest day tomorrow
Reactions: Sandisfan, Sciatic and RedheadDane
H

Big Doopie said:
but who are these TT strong guys who compete for GC these days? They are few and far between. Nearly all of the GC people are now small climber types. It used to be the reverse.
Click to expand...

Who are the top GC riders presently? Roglic and Pogacar. Who is the most hyped GC talent? Evenepoel. Who was the dominant GC rider of the last period? Froome. The pinnacle of GC riding is still continuously occupied by extremely strong ITT riders, not one sided climbing specialists.

There are excellent ITT specialists who can’t compete for GC or at least haven’t done so, so far, like Ganna, Dennis, Kung. But excellent climbing specialists who ITT as well as Kung climbs also struggle as GC men. I don’t see why it would be more balanced if a Kung or Ganna was winning GTs. Simon Yates is probably the worst TTist to win a GT in the recent period. Despite being probably one of the three best climbers in the world he has won precisely one Vuelta and he’s not that bad a TTist.

There has been a shift from TTing to climbing, I absolutely agree. But I don’t think the current mixture is as unbalanced as you are making out when you look at the riders who actually win.
Reactions: Cassirer, Sandisfan, SHAD0W93 and 1 other person

Thread officially derailed. I blame the choo choo trains. Time to delete the thread and start again.
This thread is not about
Dropped/tactical retreat
Balanced gt route/cycling is a power game
This thread is about a wonderful sterrato stage where everything can and will happen.
Reactions: Sandisfan

Eshnar said:
I'm sharing this nice video of the sterrato sectors made by a Cicloweb user on Saturday. Obviously in Italian but the pictures speak for themselves.

Back to the topic then.

Looks like the easiest possible, most grippy version of gravel - not dry as a bone (like Strade '20) also no serious rainfalls expected tomorrow so there won't be any mud (0% chances for 2010 replay).

Not the most optimistic news in terms of so expected spectacularity..
C

Currently the most versatile riders are both Slovenians. Hence hard to argue that currently the most "all rounders" aren't winning GTs. Another thing to consider is cho cho trains are not necessarily a thing anymore, when Slovenians participate in a race. If you are not a fan of Slovenians, then i agree the situation is bad. If you are not against them or are a fan, then you really don't have all that much to complain about.

In addition it looks like Bernal and Evenepoel will deliver. Nicely long cooked meal, just like a proper GT race should be. Tasty.

Apparently there's a chance for heavy rain tonight, 25% chance of rain tomorrow. No idea how that would influence the surface, although I suspect if it's still damp that would make it difficult.
C

On gravel sections riders should be allowed to supertuck.
Reactions: Sandisfan
S

topcat said:
No threat of a rest day tomorrow
Click to expand...

Eshnar said:
I'm sharing this nice video of the sterrato sectors made by a Cicloweb user on Saturday. Obviously in Italian but the pictures speak for themselves.

That road around 19 minutes in looks fabulous.


This is the stage on which Romain Bardet will win his first GT.

It's the stage that will make Davide Formolo a man.

This is where dreams will come true, Bernal will drop Evenepoel for good, Dani Martinez learns how not too crash, Vlasov finally becomes visible to fans, Yukiya Arashiro writes history, every commentator learns how to pronounce Ghebreigzabhier correctly and Nizzolo wins a Giro stage.

After the stage in a wild atmosphere of party and ecstasy the super tuck will be freed again and the forum will post in peace.
Reactions: Sandisfan and SafeBet