The race of the falling leaves doesn't quite signal the falling of the curtain this year. Even so, this not-quite-end should see a season much better than expected nine months ago go not-quite-out in style. 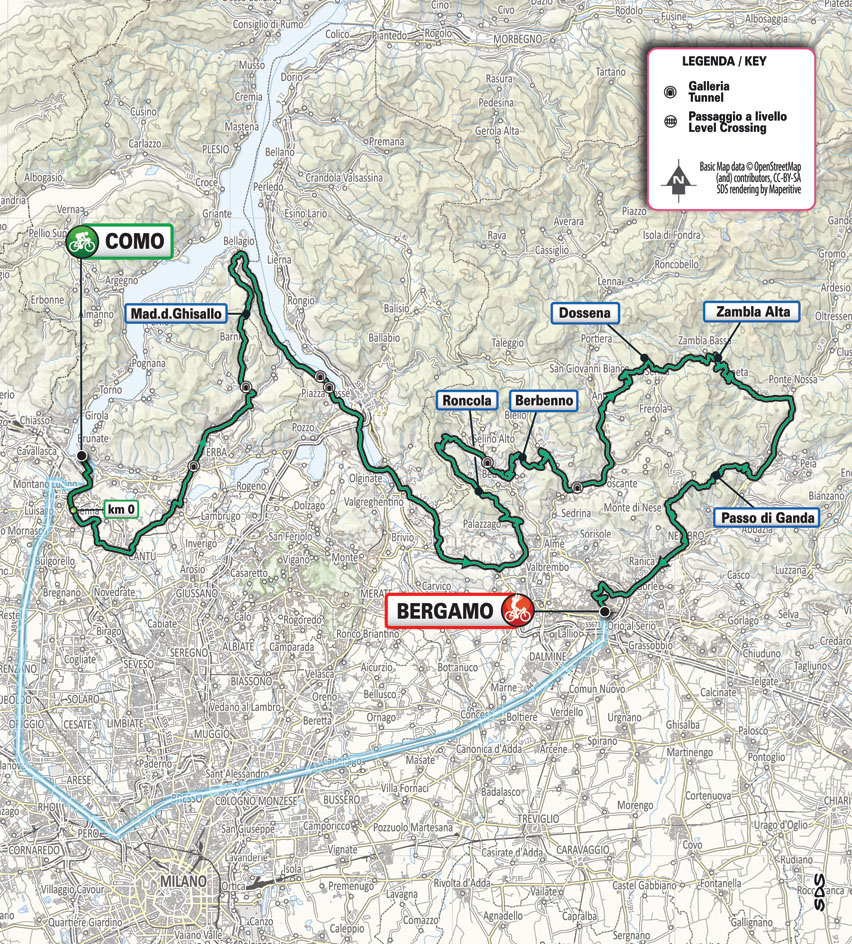 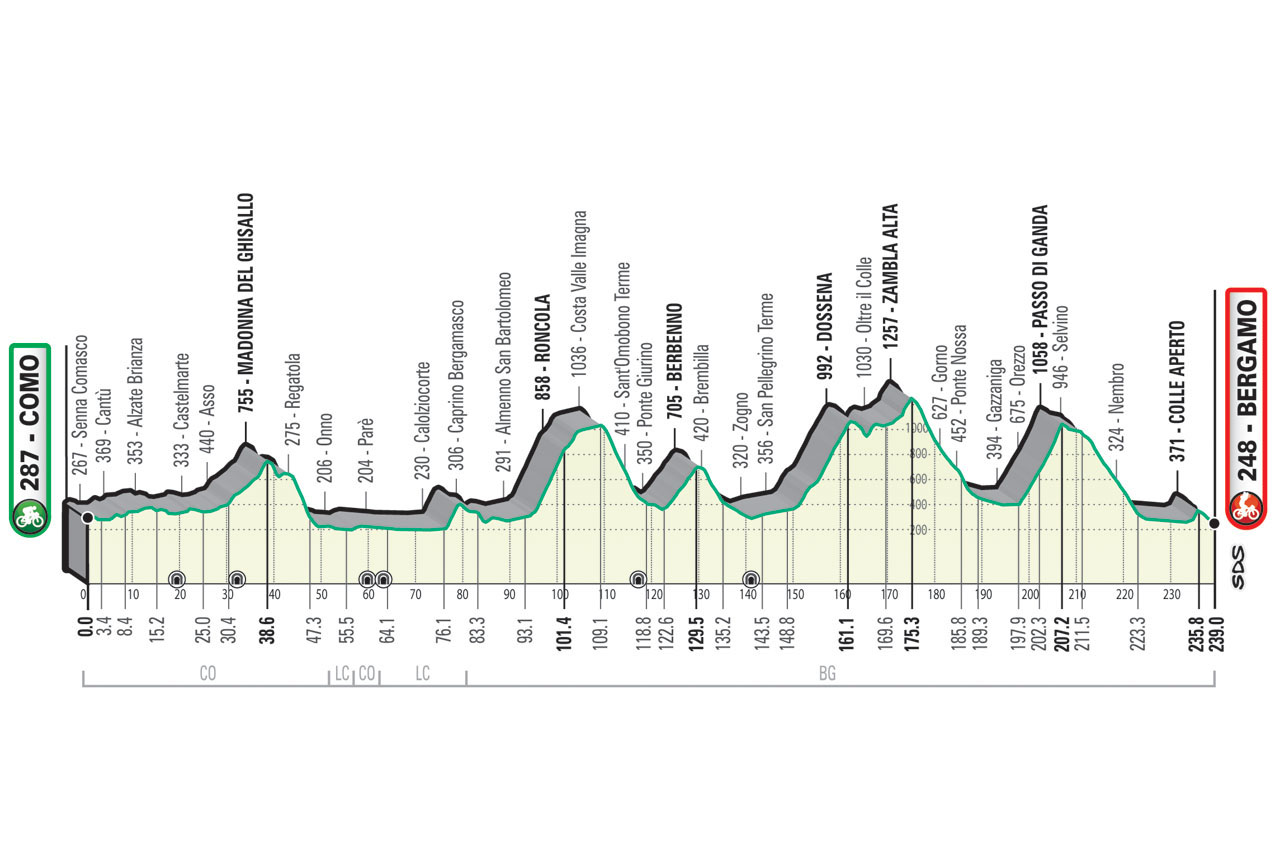 For the first time since 2016, the finish returns to Bergamo. The route isn't quite as good as that edition, but should still be sufficiently selective.

Like in 2016, the start is from Bergamo. Contrary to that year, there's only a token visit to Madonna del Ghisallo as it's climbed from the easy side.

The descent is followed by the longest flat section of the race, on the shore of the Lago di Como, passing by Lecco, thankfully abandoned as the finish location for eight years now, into Calalziocorte, from where the uncategorised climb to San Gottardo (no, not that one) starts.

From here, it's not far to the first major climb of the day, the Roncola Alta. I've put the Cyclingcols profile here as I think it shows the irregularity better. Considering what recent races have been like, it wouldn't be too much of a surprise if the big attacks start here, even if it's still the first half of the race and it's not as hard as the nearby Valcava.

There's not much respite after this, up next is the easier ascent to Berbenno. 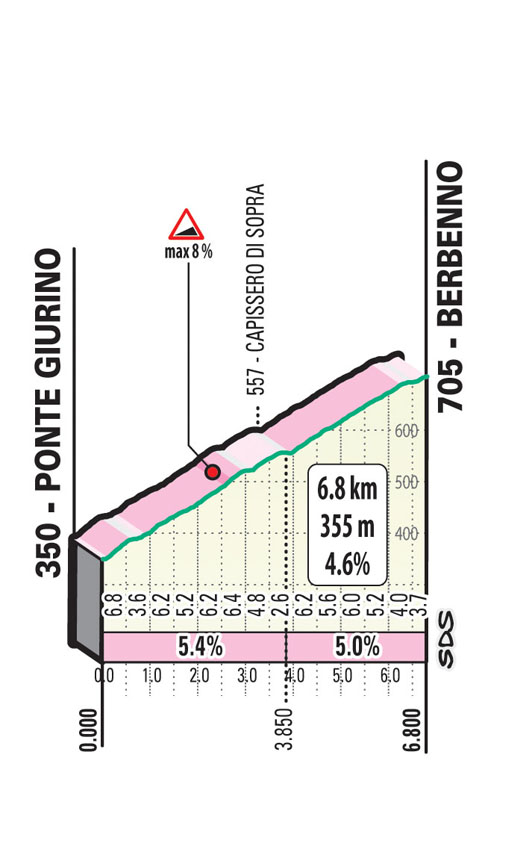 There's a bit of flat after the descent as the route heads up the valley to San Pellegrino Terme, from where the ascent to Dossena starts. It backs directly into the upper slopes of Zambla Alta, which has been categorised separately. 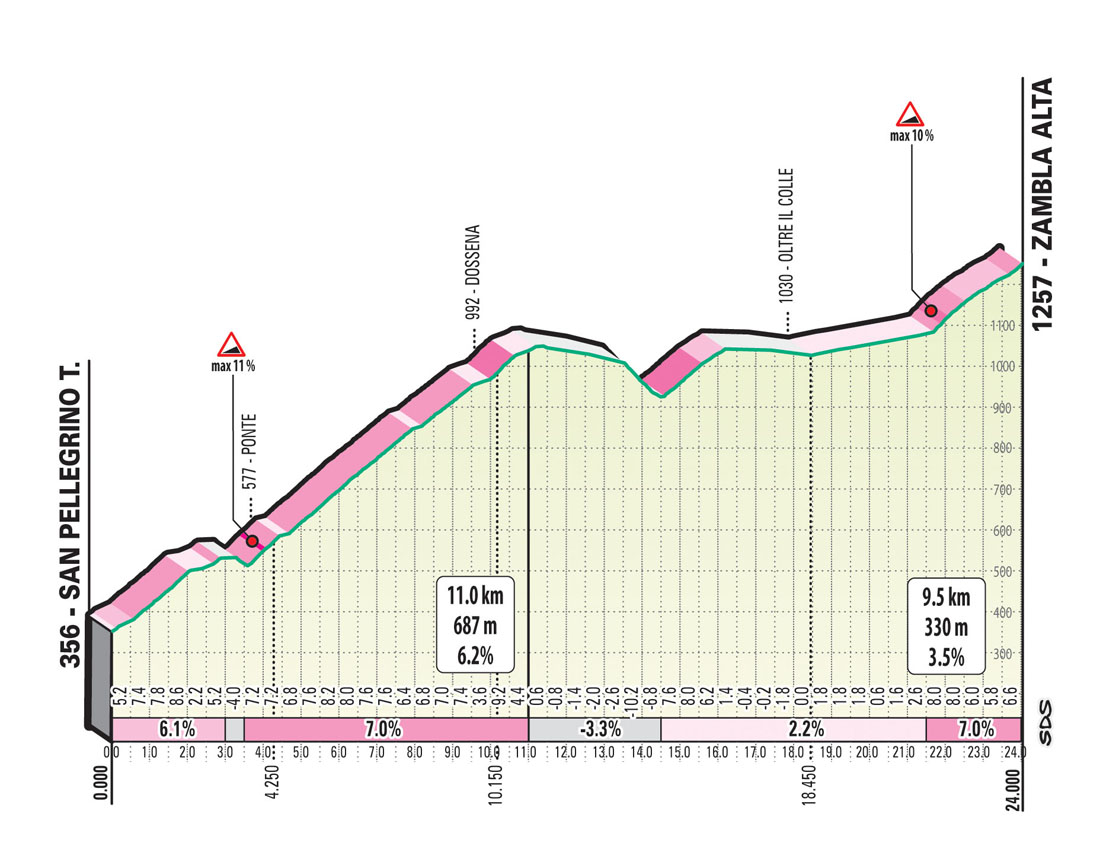 The ensuing descent is more technical than those before it, there are 9 kilometres of wide valley roads after it to repair any damage before the last big climb of the day, Passo di Ganda, is reached. 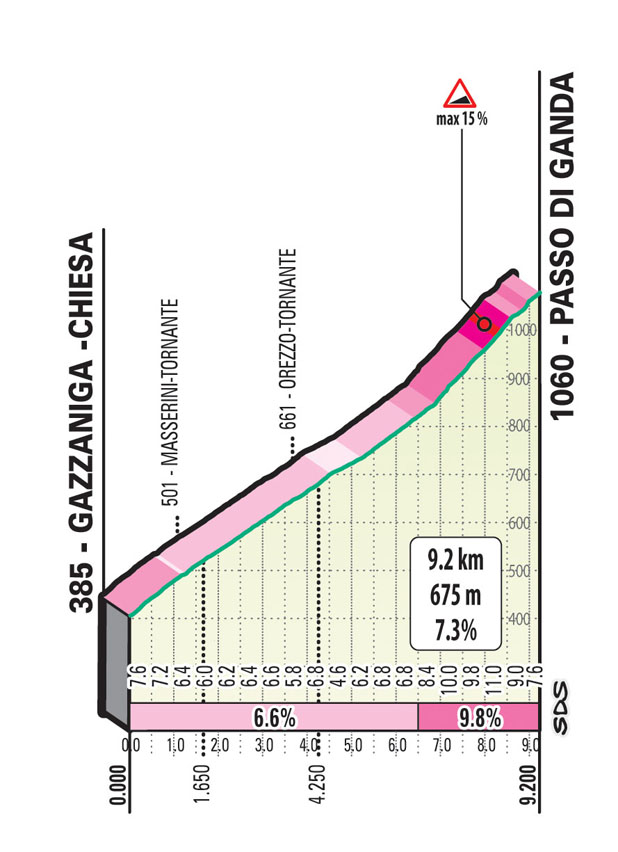 There's a very short stretch of descent followed by a couple of flat kilometres through Selvino, from where the same 19 hairpins as in 2016 are descended. There are 10 kilometres of mostly wide, straight valley roads into Bergamo, and like every visit to this city, that means there's one final obstacle, the scenic Colle Aperto, to negotiate. 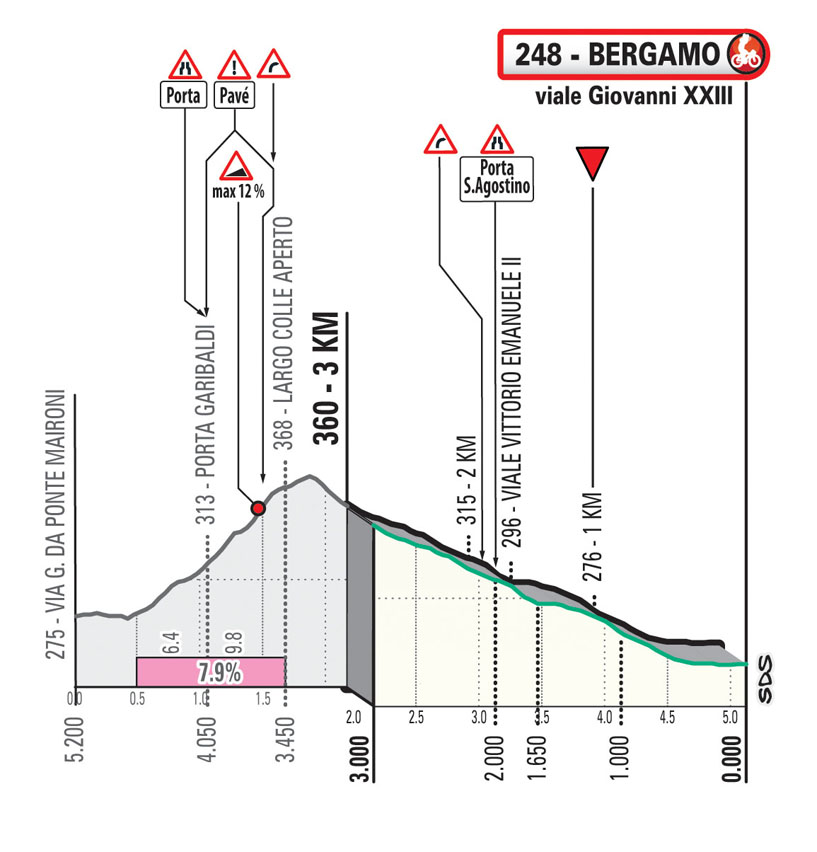 The finish is 400 metres closer to the summit of this climb than it was in 2016, so the easy descent lasts almost all the way to the line now.
Reactions: Tricycle Rider, Jungle Cycle, gregrowlerson and 3 others

First I thought Evenepoel would attack on Dossena.

Now I think he'll attack before that.
Reactions: Krzysztof_O

Devil's Elbow said:
The race of the falling leaves doesn't quite signal the falling of the curtain this year.
Click to expand...

Still more so than last year, when it was one of the first races in the re-scheduled schedule.
Reactions: noob

Interesting profile. I think it provides a lot of options for different strategies.
Reactions: Sandisfan and noob

Now I think he'll attack before that.
Click to expand...

If he attacks with Masnada it's game over.
O

Ilmaestro99 said:
If he attacks with Masnada it's game over.
Click to expand...

Mr. Roglic will be paying attention, don't you think?
Reactions: Carols, Sandisfan, noob and 1 other person

He can pay attentions as much as he wants. Specially when he is cooked after burning matches left right and centre for the last month, whilst Masnada times the peak perfectly.

I don't actually know how good Roglic, Remco and Fausto will be, but in Italian classics this October, if an attack goes with Masnada in it, it has been the winning move 100% of times
Reactions: Kaptain Kool, Bonimenier and Oldermanish

Mr. Roglic is already making friends with Evenepoel via the press: Primoz Roglic: It's beautiful when you're capable of fighting with the best | Cyclingnews

Roglič’s decision to jump in with Deceuninck-QuickStep appeared to be preparation for Il Lombardia and to go with an expected long-range attack from Remco Evenepoel.


“He’s a great rider, eh? A big talent. At his age, I wasn’t even riding a bike. I think he’s got a big future ahead of him,” Roglič said in praise of the 21-year-old Belgian.


“I have to be ready for attacks. How ready, we’ll see on Saturday. But we can expect a move and hopefully we’ll have the legs and the team to be there.”
Click to expand...

I'd love to see Evenepoel ride away with Roglic on his wheel. It could be the winning ticket.
Reactions: hayneplane, Carols, Pogačar's neighbor and 3 others
K

So the last showdown between big boys! Almost all top guys are here to win this race and there are many ways to win it. Should be a cracker.

My shortlist of contenders:

He's in the best climbing form and obviously he has a strong finish. However the profile is not as suiting for him as in the previous races, when he could outpower his rivals in uphill contest.

IMO the second favourite. In recent days he's shown a solid form again and today at the end he was likely affected by yesterday's effort. It's possible that a small group will appear at the finish of Lombardia and then Pog (if able to stay with the top guys) will be deadly.

Almeida - podiums in recent Italian classics
Evenepoel - Remco promised a show so let it be!
Yates - very strong uphill but not necessarily in a finish like here
Last edited: Oct 6, 2021
Reactions: Sandisfan

Guys I am very worried, I don't see Masnada in the startlist at the moment??
Reactions: Sandisfan and noob

Escarabajo said:
Interesting profile. I think it provides a lot of options for different strategies.
Click to expand...

Who will Remco be working for this race?
Reactions: claude cat, Didinho, Carols and 6 others

Lequack said:
Who will Remco be working for this race?
Click to expand...

Ilmaestro99 said:
If he attacks with Masnada it's game over.
Click to expand...

Don't go look at the provisional startlist if you don't want your heart to break.
Reactions: Sandisfan

Bonimenier said:
Don't go look at the provisional startlist if you don't want your heart to break.
Click to expand...

I have just seen it, man I am very worried at the moment. I cannot believe
Reactions: Sandisfan, noob and Eeslliw
B

Ilmaestro99 said:
I have just seen it, man I am very worried at the moment. I cannot believe
Click to expand...

He's been in great form this week. He should be picked over Bagioli imo.
Reactions: Sandisfan, noob and Ilmaestro99

Bonimenier said:
He's been in great form this week. He should be picked over Bagioli imo.
Click to expand...

Definitely, it's not even a difficult decision. Fausto has shown even if he is strong he is more than willing to work totally for the team and not himself. Stronger today than JA and Vansevenant. I don't understand why you would take bagioli.
Reactions: Sandisfan and Skijumper Roglic fan
K

Lequack said:
Who will Remco be working for this race?
Click to expand...

Journalist: Remco, congrats! What was the team's tactic for today?

Remco: Yesterday I had a chat with Wout and we are getting along well again. During the race I promised myself to ride 100% for Wout this time. My 100 km attack was made to force Wout's rivals to chase. I was surprised when 3 km to go my DS told me that Wout was on holidays in the Bahamas. I called him to make sure I was allowed to win and he agreed! What a generous guy and what a great day!
Reactions: OldCranky, limak_, Carols and 7 others

I'm pretty hyped for this, especially because it will be shown in full! That will give ut more of a monument feeling than it usually has, I think.

But it rubs me the wrong way that the season does not end with this race.
Reactions: hayneplane
S

Ilmaestro99 said:
Definitely, it's not even a difficult decision. Fausto has shown even if he is strong he is more than willing to work totally for the team and not himself. Stronger today than JA and Vansevenant. I don't understand why you would take bagioli.
Click to expand...

Correct, DQS should take Masnada instead of Bagioli, IMHO.

PCS‘s startlist also shows Movistar without Valverde?!... That would be crazy, wouldn‘t it? Strange...
Reactions: Sandisfan, noob and Ilmaestro99
R

Now I think he'll attack before that.
Click to expand...

Argee, Roncola seems great for a first shift, and that leaves only 140km left to race.
Reactions: SHAD0W93

I‘m wondering what‘s the matter with Visconti. He signed a new deal for Bardiani for 2022, and didn‘t race since July. On paper, he‘s one of their best men. Seems to lack shape or be ill/injured? Anyone heard anything?
Reactions: Sandisfan

Is this the best and most stunning list of contenders all year long?
Who's missing from the riders of the year? (Apart from the sprinters/ cobble guys/ Ganna.)

Others?
I feel that while often many riders have already ended their season there are almost all possible top contenders present this year?