De Lie is insane, the Cofidis guy helped him a lot by pulling all the way from the climb to the finish though.
Reactions: Sandisfan

What was Cavendish doing?
Reactions: Sandisfan
B

Ilmaestro99 said:
What was Cavendish doing?
Click to expand...

Today the A-I race has a Monte Grappa mtf, sadly only the boring side from Seren.
First they wanted to use the northeastern side that has never been used in a pro race before and features a super steep section, but in the end it didn't happen.

Mayomaniac said:
Today the A-I race has a Monte Grappa mtf, sadly only the boring side from Seren.
First they wanted to use the northeastern side that has never been used in a pro race before and features a super steep section, but in the end it didn't happen.

Why didn't they just use the same road as last year?

Fortunato crashed yesterday, but he has started today, so perhaps a repeat victory is still possible.
Reactions: Sandisfan

The mighty Vuelta a Colombia is underway, one of the world's premier small stage races, in that it is known for difficulty comparable to elite pro level races, a highly competitive field, and something of a Volta a Portugal bloodbath of forgotten prospects and CT-level journeymen. Colombia's cycling tradition is, however, extremely strong as we know and the race carries a high level of prestige back at home, even if there has been also a long legacy of the best Colombian riders not being present due to racing in Europe, and the race being dominated by older elite riders whose runs in the World Tour (or its predecessors) have come to an end (Félix Cardenas, Hernán Buenahora, Óscar Sevilla) or riders with suspect or dubious history before or after their successes here (Giovanny Báez, Aristobulo Calá).

Recent history has been a bit more promising though, with the average age of recent winners having dropped considerably, the last five (including Calá who is currently suspended) being 27 (Calá), 25 (Caicedo), 34 (Duarte), 22 (Camargo) and 27 (José Tito Hernández) meaning Duarte is the only real veteran of the five - before that, other than Sergio Luís Henao at 22 in 2010, winners had uniformly been in their late 30s, with the domination of first Cardenas and then Sevilla through the early 2010s, then 35-year-old Mauricio Ortega in 2016. The race has also become a little more cosmopolitan lately too, after a very insular period; Caicedo even becoming only the fourth overseas winner of the race, after José Gómez del Moral in 1957, José Rujano in 2009 and Óscar Sevilla from 2013 to 2015. Sevilla was racing on a Colombian team and now holds dual nationality, although he still races under a Spanish licence, however, whereas Gómez del Moral and Rujano had been racing for overseas teams in their homelands of Spain and Venezuela respectively.

Historically, Venezuela has provided the most overseas interest in this race, with the cycling-mad Tachirá region and the oil-rich Zulia both close to the border, but the political situation has meant this has been less frequent. Nevertheless, there are four overseas teams competing - two from the fast-rising cycling boom nation of Ecuador (Movistar-Best PC, led by veteran Byron Guamá, and Banco Guayaquil, who have signed defending champion José Tito Hernández and Robinson Chalapud to go with their Ecuadorian team), one from Mexico (Canel's-ZeroUno, who have former Caja Rural Colombian Heiner Parra alongside their top Mexican lineup of riders like Ignacio Prado and Efrén Santos), and one from the US (Team Illuminate, who have a mix of Colombians and US-Americans as well as an anomalous German, and will be led here by Rodolfo Torres). There are also overseas riders making it in Colombia or as guests, obviously Óscar Sevilla is obvious, but also teams like Liro Alcaldía de la Vega, who had such unexpected success last year with Yesid Pira, have a group of Guatemalan riders (including Álex Julajuj!), and other small teams have brought guest riders from Central America, with Construcciones Zea having Salvadoran Brandon Rodríguez, Herrera Sport signing in a Guatemalan and Honduran rider, Sistecredito a Panamanian and PetroLike signing in two Mexicans.

Other than Hernández and Chalapud at Banco Guayaquil, the big teams in Colombia will be going all out for this for obvious reasons. Team Medellin are, even after losing Hernández, stacked to the gills, still nominally led by Sevilla but with 2019 winner Fabio Duarte, Robigzon Oyola, Aldemar Reyes and now Javier Jamaica they have a number of bullets in their gun. EPM are led by 37-year-old Juan Pablo Suárez, but they have ex-WT pros Rodrigo Contreras and Hernando Bohórquez who are still young enough to have something to prove, and Diego Ochoa; CTA have Darwin Atapuma for the GC and Nelson Soto for sprints; Orgullo Paísa (Indeportes Antioquia) have last year's 2nd overall Álex Gil and ex-Burgos rider Juan Felipe Osorio; Supergiros have Didier Chaparro, Bernardo Suaza and young Yeison Rincón who was 2nd in the nationals ahead of Chaves earlier this year; PetroLike have former Giro stage winner Miguel Ángel Rubiano and sprinter Jordan Parrá who even spent some time in Vietnam; and Liga Cundinamarca-Nectar (please say Pinturas Bler are back on for sponsorship, bring back those jerseys!!!) have Yecid Sierra (of Asia Tour Sputnik history) and 40yo Walter Pedraza, whose team history includes the likes of Tinkoff Credit Systems and Savio's mob back when Selle Italia was the lead sponsor!

The race has been underway for a couple of days, but they've been barrelling down the Caribbean coast of the country so far and therefore it's a very flat start to the race. Luís Carlos Chía won the first stage, from Barranquilla to Cartagena, but not using, as Gustavo and Asier at Altimetrias de Colombia are so fond of when proposing routes around this part of the country, the Cerro de La Popa in Cartagena, in a bunch sprint ahead of Juan Alejandro Umba and Jordan Parrá. Expected sprint favourites like Nelson Soto are well down and may well have been blocked by a big crash in the run-in which resulted in a number of the Colnago-CM team being taken out, and most notably Óscar Sevilla, although it being in the last 3km, the now 45-year-old Babyface is still in the hunt. Bonus seconds at metas volantes were largely hoovered up by overseas riders.

On stage 2 from Cartagena to Sincelejo, a more organised sprint was won by Nelson Soto ahead of Johan Colón of Orgullo Paísa and maillot jaune Luís Carlos Chía. The stage was never truly flat but also never particularly difficult, the only categorised climb coming just 4km into the day. All of the bonus seconds have been taken by breaks and sprinters so far, so it's as-you-were going into stage 3, another sprint stage into Montería.

Stage 4 is where the race hots up, with a mountain stage into Yarumal which consists of a long flat and then effective Unipuerto, except the Alto de Minavieja is 6,5km from the line - however, coming off the back of essentially 50km of solid climb, that is nothing, right? This is broken up into the two-stepped HC Alto de Las Ventanas, 34km at 5,5%, around 10km of rolling including a small riser in the middle, then a final 6km at 7%. This will definitely tell us who will be competing here. Stage 5 to La Unión is a medium mountain stage, a long but gradual climb to open the day, and a serious climb onto a high plateau around the halfway point, before around 45km flat, then a final cat.2 climb of 7km at fairly diesel grades of a consistent 5,4% and a 5km run-in. Stage 6 drops us back to sea level via a couple of climbs early in the day, essentially classic Vuelta a Colombia fare as we move from the altiplano to the Magdalena basin, so should be a sprint but there is climbing early on to burn some of them off. Stage 7 is an MTF at the legendary Alto del Vino, 40km at 5%, and up to 2850m. Stage 8 descends down to middling altitude north of Bogotá with an MTF at the cat.2 town of Somondoco, around 5,5km at 6,5% - this profile rather resembles a Vuelta profile to somewhere like Monte Naranco, but at 1000m higher altitude. Stage 9 sees us retrace our steps back on to the eastern Altiplano up the Alto Sisga, then head north through the plains of Boyacá through Tunja and Paipa to Duitama and then for a complex hilly finale in Santa Rosa Viterbo. Finally, the race ends in the race of truth, with a 42km brute of a time trial from Paipa to Tunja, passing through Nairo Quintana's hometown of Cómbita on the way.
Reactions: Unterlenkerfahrend and Sandisfan

Mayomaniac said:
Today the A-I race has a Monte Grappa mtf, sadly only the boring side from Seren.
First they wanted to use the northeastern side that has never been used in a pro race before and features a super steep section, but in the end it didn't happen.

Unrelated but I saw the u23 Giro was using Passo Guspessa this year, which I didn't know. Is that viable for the Giro as well?
Reactions: Sandisfan

Red Rick said:
Unrelated but I saw the u23 Giro was using Passo Guspessa this year, which I didn't know. Is that viable for the Giro as well?
Click to expand...

I just looked at it a bit closer and the road on top of it that connects it to the Mortirolo looks nice. 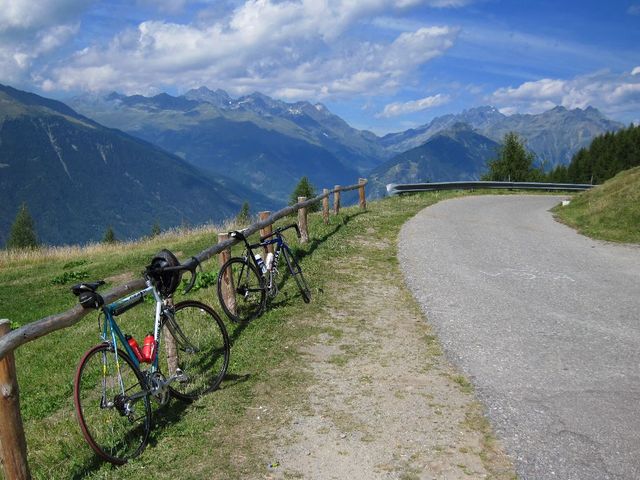 Use it and have an easy uphillish finish in Bormio as a Mortirolo-Aprica alternative.
Reactions: Sandisfan and Red Rick

Horrible weather, LTS leading the bunch. 4' lead. A bit weird that they led both Alpecin and Wanty put a man in the break, now everyone is going to look at them. Not going to be easy to reel them in with this weather and probably almost no help. Big opportunity for a Taco day.
Last edited: Jun 5, 2022
Reactions: Sandisfan

RedheadDane said:
Great news, everyone:
The Adriatica Ionica race will be live on YouTube!

It also has a Slovene-count of zero.
Click to expand...

It appears I was wrong... no coverage!
Looking at the scheduled start for the upcoming YouTube stream, it'll start at 16:00, but it appears the stages are generally expected to finish before that.
Reactions: Sandisfan

Horrible weather, LTS leading the bunch. 4' lead. A bit weird that they led both Alpecin and Wanty put a man in the break, now everyone is going to look at them. Not going to be easy to reel them in with this weather and probably almost no help. Big opportunity for a Taco day.
Click to expand...

4'40 and literally noone chasing in the bunch. This one is probably for the break. Just weird that you let a 10 man break with a guys like Van Der Hoorn in it go in this weather.
Reactions: Sandisfan

7'10 bunch gave up lol. Race over after 100kms.
Reactions: Sandisfan

Gap slowly coming down again but you'd think it's too tall an order to close down all ten breakaway riders.
Reactions: Sandisfan

In IA there are 5 km to the top of Monte Grappa, and only Scaroni, Covili, Zana, Pronskiy, Tesfazion, Bizkarra, Cepeda, Fortunato, Zoccarato and Bevilacqua are left in front, but Scaroni is apparently struggling now.
Reactions: Sandisfan

Scaroni and Zoccarato are 15 seconds behind now. Bizkarra and Fortunato are also dropped.
Reactions: Sandisfan

Samu Cuenca said:
In IA there are 5 km to the top of Monte Grappa, and only Scaroni, Covili, Zana, Pronskiy, Tesfazion, Bizkarra, Cepeda, Fortunato, Zoccarato and Bevilacqua are left in front, but Scaroni is apparently struggling now.
Click to expand...

Of course he shows up again the moment the Giro is over. Spilak would be proud.
Reactions: Sandisfan, SafeBet and Samu Cuenca

Looks like the peloton in Brussels decided to have fun.
Reactions: Sandisfan
B

Sheffield is so ridiculously good. He needs to slow down cause there's no way you can bridge alone.
Reactions: Sandisfan
V