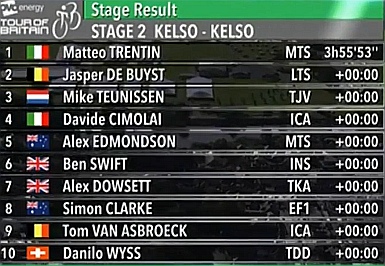 Did Mathieu get impeded in the final curve or what happened to him?
Z

Trentin showing yet again that being the “fastest guy who is still there” is a great career niche
Reactions: Sandisfan

tobydawq said:
Did Mathieu get impeded in the final curve or what happened to him?
Click to expand...

That's two days in a row where he didn't look 100% in the sprint. The little dig on a previous hill was nice though. I think he'll get better in the next stages.
Y

A professional performance by Trentin - Has a strong team to support his GC ambitions.
Reactions: Sandisfan

I’m hearing riders got dropped?! How the hell did that happen?!??! Did some pundies from the Nightingales pretend to be a Belgian national squad and gate-crash it? (Yeah ‘gales, that’s right. Let’s get this beef going).

I see that we do not have any budding, stage reporting Novocastrians (or Geordies, we'll get to the difference later...) on this forum so I will once again assume the mantle and provide a beautiful tapestry of imagery and information to rival that of Carlton Kirby in full flow. It might even be more accurate...


Today's inevitable bunch sprint in Newcastle begins in Berwick-upon-Tweed, the Hokey Cokey of British towns (Is it in Scotland? Is it in England? They don't seem to know what they want. No Brexit metaphors please...). Conditions down the North East coast today seem to be playing into the hands of the organisers, with a headwind/slight head cross wind dooming any break to the inevitable catch, probably somewhere between Tynemouth and Wallsend (maybe at Byker Grove?!?!?!). Contrary to popular belief, Berwick is not at war with Russia and, as such, todays stage should get underway with the only possible disruption being a long discussion about whether they are officially starting in Scotland or England... A small mention of Berwick Castle should be made, why will quickly become clear.

Rather than follow the coast and provide beautiful visuals of the Holy Island of Lindisfarne, accessible by causeway at low tide and home to a delightful 16th (updated in the 19th century) century castle, we head inland to find some climbs. No doubt there was discussion that yesterdays climbs were too hard after they caused splits in the peloton and maybe some of the organises wanted to drop todays leg destroying gradients but they have been overruled. Ford Common at 2km and 4.2% is where Richard Carapaz was expecting to put tens on minutes into the rest of the field, so his absence will make for interesting racing. This towering vista makes Tabletop Mountain look like Coffeetabletop mountain in comparison and could easily cause the peloton to arrive in Newcastle well after dark, something that may worry many of the riders who are quartered close to the Bigg Market.

Weetwood Bank and Lyham Hill follow in quick succession and these climbs are too horrible to describe, so I'm not going to bother.

Now the climbing is out of the way we can get back to what the North East coast is famous for, and that's castles (yes, including that new one I've aready mentioned). Possibly the most famous of these is Bamburgh, built by the Normans and associated with Joyous Gard, the mythical home of Sir Lancelot, in Le Morte d'Arthur by Thomas Malory (get it on your kindle, the Guttenberg project is a fantastic resource). This incredible location is truly worth a visit if you are ever in the area, and I'm including today's peloton in that. Climb off your bike and go and have a look, it's awesome.

After leaving Bamburgh we have our first sprint in Seahouses. The claim that kippers were first produced in Seahouses, a stalwart of many British breakfast repertoires, may have many in the peloton hoping for an early lunch, but I'm afraid they'll be through here and onwards like a Whippet, ancestor to a dog we shall discuss later (keep reading!).

As we journey down the coast, the next castle we reach is Dunstanburgh. These ruins are usually reached via a walk from Craster, another place famous for the Kippers it produces, allowing walkers to fill up before the trek to the ruins.

From here we will travel south to Littlehoughton, turn inland and head for Alnwick to see, yes, you guessed it, another castle! Alnwick Castle is the second largest inhabited castle in the UK (after Windsor castle) and again it is truly worth a visit. The vast majority of readers may even recognise it as it was used as a location for Hogwarts in the Harry Potter films (Admit it. You've seen them all. Probably more than twice).

After passing through this glorious market town, birthplace of the "Voice of Darts" Sid Wadell, we head back to the coast. There is, of course a reason for this, we need to pass through Warkworth. Why? Yes!! Another Castle!! A medieval motte and bailey castle (sorry, history lesson flashbacks again...) that is well preserved and part of a castle tour that you will remember for the rest of your life. Turner's evocative painting of this location brings to mind the typical, rolling weather you expect to see in the area. A towering cumulonimbus provides a foreboding backdrop to the sun-kissed castle, perched high above the River Coquet. Warkworth also provides the location for our second sprint. Hopefully none of our keen competitors will be distracted by the picturesque tableau they have just passed.

As we Amble (place pun, LOL) down the coast we begin to approach places with a history many may be familiar with. It's a particular disappointment that we will not pass Creswell Beach or through Ashington, hopefully the helicopter camera will pick it out. Ashington is known for being towards the Northernmost tip of the Great Northern Coalfield and, like many of the towns and villages along the coast, its fortunes have been inevitably tied to the mining industry. It is also known as being a location where "Pitmatic" or "Yakka" a dialect of English was spoken. Distinct from Geordie (see, we're getting to it) these dialects are slowly converging. Ashington is famous for producing many footballers, including the Charlton Brothers.

Anyway, our route takes us inland to Morpeth. Here there is another castle, it's not surprising anymore, but it is also the birthplace of Robert Morrison, the man responsible for translating the Bible into Chinese, along with Joshua Marshman. This is the beginning of the end of the race as we meander through old mining towns like Bedlington and Cramlington. Our final intermediate sprint will happen just after Seaton Delaval Hall and afterwards we return to the coast and pass through Whitley Bay, a popular seaside town. I mentioned a dog didn't I? Well that's the Bedlington Terrier, a close relative of the Whippet.


We're now approaching the bunch sprint, following the Tyne into the centre of our final castle (the new one that I mentioned previously). So what's the difference between a Novocastrian and a Geordie? Novocastrians are specifically from Newcastle, whereas Geordie's are from both Newcastle and the surrounding area. Geordie is also a dialect as previously mentioned. So how is a "Geordie" defined? Many will be aware that "Cockney" is someone born within the sound of Bow Bells, the churchbells in the Christopher Wren rebuilt Church of St Mary-le-Bow. In a much more Northern version of this tradition, Geordies are traditionally born within spitting-distance of the Tyne.


If you know better stuff about this area, it's your fault for not writing this and costing me my lunch hour. Enjoy the bunch sprint, route and profile are: 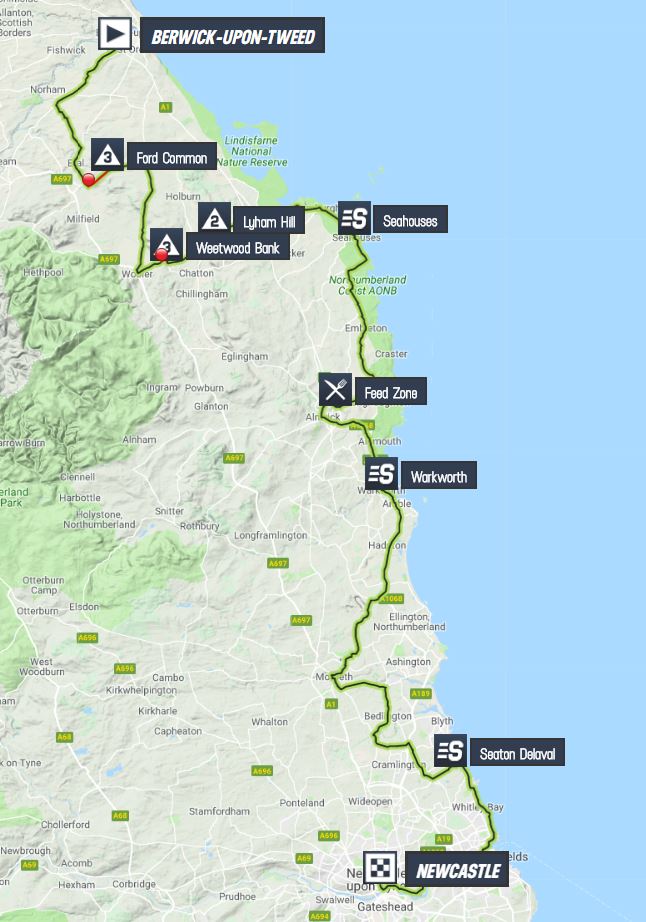 Did they do that level crossing according to the rules?

Armchair cyclist said:
Did they do that level crossing according to the rules?

I can't tell if these about breaks in the group apply only to breakaway groups or the peloton as well...

Is there a live feed somewhere? ITV2?

Thanks, will catch the end.
Reactions: MartinGT

Great to see H Tanfield here. His mam passed away only a couple of weeks ago.

Peloton absolutely chewing bar tape here to pull them back.

Looks like they'll get them at the death but at least the break have made a bit fo a race of it.

Couple of riders in the break starting to die

Alan Shearer a bouncer behind him lol

MVDP got caught in poor position

Long range, uphill sprint and he made the rest of them look like the cat 4's sprinting for 37th at the South Shields Crit.
Reactions: MartinGT
M