wiggos sideburn said:
He's also given her flowers and apologised to her in person today
Click to expand...

Indeed I saw, a nice gesture, hopefully there will be no reoccurrence or it’ll cost him jewellery next time.

mewmewmew13 said:
Rape has nothing to do with 'titillation' and 'sexual harassment' ..it is a violent crime.

Unless you have ever been sexually harassed at any level at any point in your (obviously very young) life then, no, you could not possibly 'get' the point that some here are trying to make that it was inappropriate.

Also, by trying to equate disapproval of Sagan's actions with 'crying rape' ..you are pathetically dismissing the validity of why his action was inappropriate in the first place.

I'm sorry that that is your impression. Hopefully you will never be bullied, disrespected or harassed in your life.
Cheers
Click to expand...

Right on Sister.....they don't understand what it is like, unfortunately it is that simple

I'm a poster like everyone else. What I did was *not* baiting nor 'borderline'. As a mod I will try my hardest to follow the rules, but that doesn't mean I have to be holier than thou. When I post I post as a poster. Just as I did before being a mod. If you have a problem with how I am as a mod, then take it to the moderators thread.

Firstly, it is making fun of the original incident.
Click to expand...

Which isn't a difference really, since the action by Sagan also was a joke.


Caruut said:
Secondly, at the moment it is much more of a violation to do that to a woman than it is to a man. I don't think that's right, but I do think it is very much the case. In general, women mind more. I believe that this is because weird social ideas about the "purity" of women mean that culturally women being treated in such a manner are frowned upon much more than men being treated in such a manner.
Click to expand...

This is utter sexism. It doesn't effing matter whether it was done by or to a woman or man.


Caruut said:
Thirdly, there is much less of a culture of such abuses form women on men than there is from men on women.
Click to expand...

So??? That doesn't change the action.


Caruut said:
Fourthly, I think the power relations between the actors are very important. The girl in Sagan's case has very little power. He is the superstar athlete and she is the (until then) largely anonymous face, and is in no position to do anything about it there and then in front of the cameras. The power disparity in the other cases isn't likely to be nearly as large.
Click to expand...

Doesn't make it one bit worse or better.


Caruut said:
So, can we stop pretending it's exactly the same?
Click to expand...

IMO they are equally appropriate. I don't think that either was inappropriate.

mewmewmew13 said:
You keep bringing up these passive aggressive accusations directed squarely at me. It seems a very thinly veiled attempt to get a rise and response from me.
Click to expand...

So you wouldn't have commentated it in a negatively way if a male cyclist did the same thing?


mewmewmew13 said:
You are supposed to keep a high level of reason and intelligence when weighing your comments in your role as an admin...I am not seeing any hint of either in your posts.
Click to expand...

See my answer to Caruut.


mewmewmew13 said:
Just so you can rest easy, I was actually inferring in my original comment "There will always be louts" that as well as Sagan being a lout the female cyclist on the podium was also being a lout.
Her move was immature and stupid as well as trivializing a more important lesson that obviously Sagan has not learned from this incident.
Click to expand...

Funny how it was only posted as a response to Sagan's comment then.


mewmewmew13 said:
It is not my problem that you miss subtleties in comments and then keep twisting the intent of my post to satisfy your irritation with me.
Click to expand...

I agree. You word yourself to perfection and yet I try to twist every word written by you to satisfy my irritation with you.

Or maybe you don't word yourself perfectly and misunderstandings happen. And maybe I would have responded the same to any other poster. Perhaps it has nothing to do with you.


mewmewmew13 said:
From what I see of your short history here as a mod/admin I find you are walking a thin line of power abuse and poor taste.
Click to expand...

Sorry for not having *your* taste. Which mod power is it that I have abused?

PS: What the female rider (sorry don't know her name) did was seriously funny
Click to expand...

You do know that there is a thread in the 'about the forum' section, where your comment belong, right?

Carols said:
Right on Sister.....they don't understand what it is like, unfortunately it is that simple
Click to expand...

Sorry for having a penis. I will therefore never be able to understand what it's like.

Netserk said:
Sorry for having a penis. I will therefore never be able to understand what it's like.
Click to expand...

No need to be sorry, just behave like a gentleman It's really is not that difficult!!!

I guess this can be locked now

wiggos sideburn said:
No all he said it was meant to be a joke which he feels some have not understood. He's apologising to her as he realised she didn't like it means he is taking responsibility
Click to expand...

Explain what 'not understanding the joke' means with regard to pinching a girl's ***. are there some other levels to it that I haven't considered?

The Hitch said:
Explain what 'not understanding the joke' means with regard to pinching a girl's ***. are there some other levels to it that I haven't considered?
Click to expand...

I'm presuming by what I have read on what he said earlier, he feels the fans want him to do something everytime, he brought up the wheelie after the win the week before. So I'm guessing he just thought it would be a bit silly and people would have a quick laugh but the reaction didn't turn out the way he expected

Netserk said:
This is utter sexism. It doesn't effing matter whether it was done by or to a woman or man.


So??? That doesn't change the action.


Doesn't make it one bit worse or better.

IMO they are equally appropriate. I don't think that either was inappropriate.
Click to expand...

C'mon Netserk, you don't honestly believe this stuff deep down in your heart do you? As much as you or I might like for things to equal between the sexes, we just aren't there yet.

jaylew said:
C'mon Netserk, you don't honestly believe this stuff deep down in your heart do you? As much as you or I might like for things to equal between the sexes, we just aren't there yet.

I know things aren't equal between the sexes.

Originally Posted by ‏@petosagan
She forgot to recognize me for my podium patent hahaha!!!

I hope Sagan doesn't want credit for this guy's behavior....

Cyclist Wanted in Long Beach Groping Attacks
LONG BEACH, Calif. (KTLA) — Police in Long Beach are looking for a bicyclist who they say brazenly gropes women and girls as he rides by them on the street.

The most recent attack was reported March 25 at Fourth Street and Atlantic Avenue.

The victim of the attack has yet to come forward, but a witness provided information to police.

Authorities have released surveillance video of the suspect in hopes the victim will come forward, or the public can help identify the suspect.

He is wanted in 21 sexual assaults since September of last year, and authorities believe there may be many more assaults that have not been reported.

Back in December, police released surveillance video to the media and the suspect went silent for a few months, but the attacks picked up again in February.

Police say the suspect rides up behind his victims, grabs them, and then rides off.

Long Beach Police Sergeant Aaron Eaton said the suspect is “somebody who definitely needs to get off the street.”

Eaton says the victims range from elderly women to a girl that was only 12-years-old.

“If he’s willing to do that kind of crime it’s something we take very, very seriously,” Eaton added. 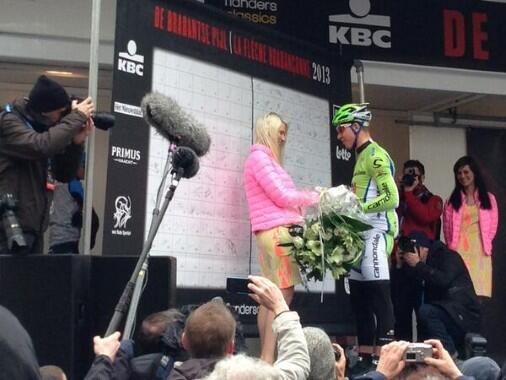 They will have 20 kids, and all of you will look stupid.
(sarcasm)
The guy is just awesome.
I

Peter Camps ‏@campspeter
@cannondalePro @petosagan launches new habit: the winner gives the flower girl flowers before departure and gets them back after victory!
Click to expand...

Netserk said:
Which mod power is it that I have abused?
Click to expand...

you are a troll

myrideissteelerthanyours said:
you are a troll
Click to expand...

Is that a mod power?

Netserk said:
Is that a mod power?
Click to expand...

it goes against the spirit of the forum. you would understand if I was allowed to speak of clinic things. you would DEFINITELY ignore all my posts, kiddo

OK. so now that SAGAN has repaired his conduct/behavior with good deeds & apologized properly to the Podium hostess...

Can the Mods shut down this Thread?

hfer07 said:
OK. so now that SAGAN has repaired his conduct/behavior with good deeds & apologized properly to the Podium hostess...

Can the Mods shut down this Thread?
Click to expand...

Everyone is leaving out how a hand full of recently killed flowers is the solution to a bum pinch, I mean the bum pinch was supposedly sexist and offensive and who knows how many other ways some viewers were caused to go into spasms. Yet, the presentation of newly killed flowers solves it all

Agh, man this just gets better!

hfer07 said:
OK. so now that SAGAN has repaired his conduct/behavior with good deeds & apologized properly to the Podium hostess...

Can the Mods shut down this Thread?
Click to expand...

Just because he apologized some people will most likely still hate on him. And we can still discuss his action (if there is anything left to discuss..).

Most likely the thread will die its natural death. No need to force it.

They will have 20 kids, and all of you will look stupid.
(sarcasm)
The guy is just awesome.
Click to expand...

20 mini-Sagans, that is a scary thought

Arnout said:
20 mini-Sagans, that is a scary thought
Click to expand...

To who, cycling or the female population?

I love the way you come on here netserk and disect the posts, then reply with your adroit and cleverly worded cr@p.