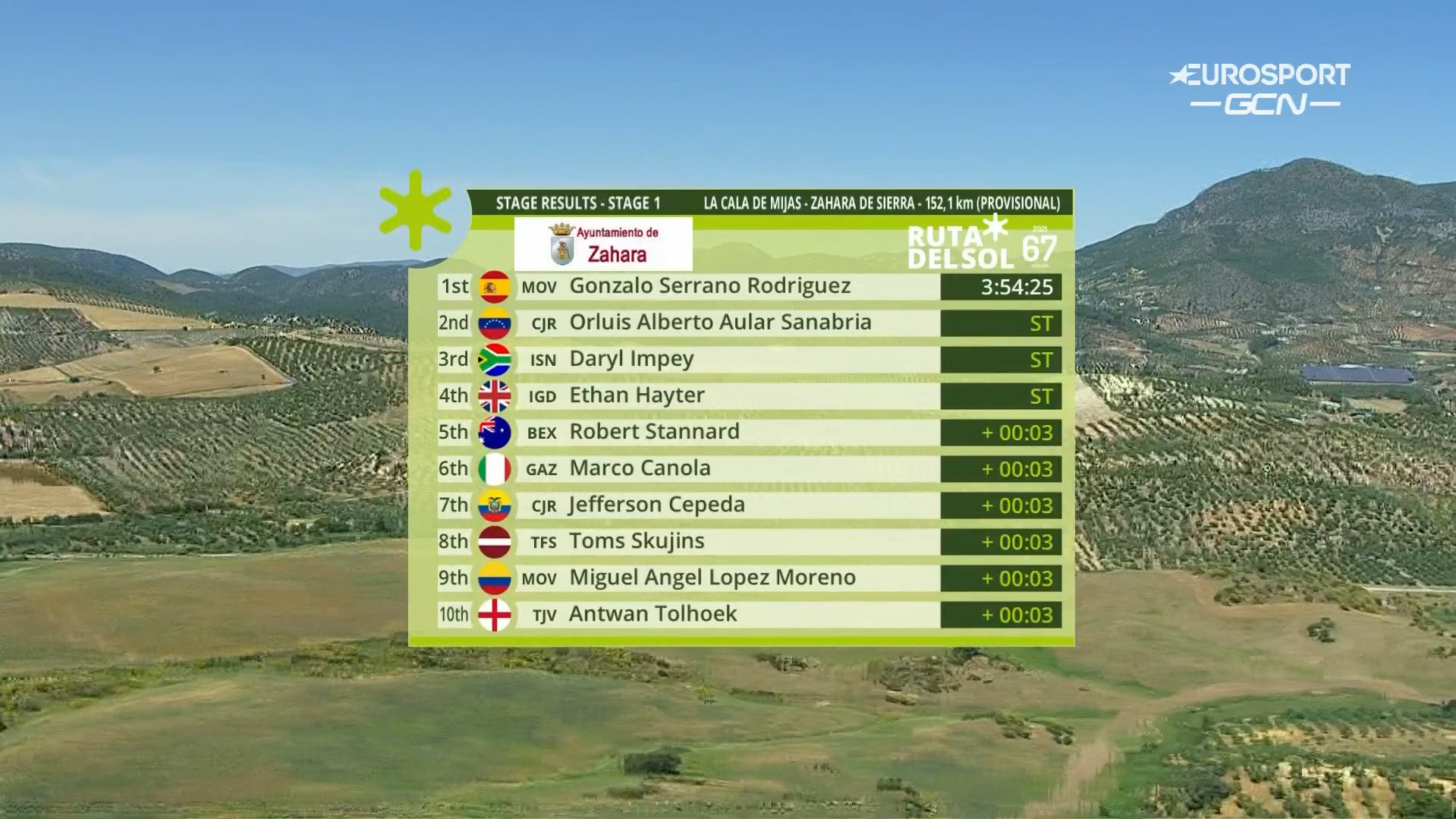 Orluis Aular actually has several sprint results in minor races a couple of years ago. Had hopes for him, but he never really managed to up his level at the Pro circuit.
Reactions: Sandisfan

Herregodts 16th at 7 seconds. That's nice. His Spanish campaign is going great so far. Curious about the more mountainous stages. He's a pursuiter and was quite fast as a junior, but he seems to climb more than decent too.
Reactions: Sandisfan

Anyone know why Cavendish finished 35 minutes down, 24 minutes after the 2nd last rider?
Reactions: Sandisfan
M

Broccolidwarf said:
Anyone know why Cavendish finished 35 minutes down, 24 minutes after the 2nd last rider?
Click to expand...

To get in a breakaway after a chilled out day?

MrTea1976 said:
To get in a breakaway after a chilled out day?
Click to expand...

It's hardly chilled out if you ride that far on your own (I don't know when he was dropped).

I don't know the reason either, but he was outside of the time limit, but they kept him in? So it must have been something a bit out of his hand?
Reactions: Broccolidwarf
I

PCS has an 'updated' time for Cavendish (+24:36), now under the time limit.
Reactions: Broccolidwarf and BlueRoads
M

Two thirds of the break down!
Slippery.

What a finishing climb!
Reactions: titan31 and RedheadDane
M

Hayter's attempt at a celebration showed how hard it was.
Reactions: Sandisfan

Kazistuta said:
Orluis Aular actually has several sprint results in minor races a couple of years ago. Had hopes for him, but he never really managed to up his level at the Pro circuit.
Click to expand...

He's only been at the pro level for a year and a half, though; 2020 was far from a 'normal' year in terms of racing etc., and he's only 24 years old, so I'd say that the hopes shouldn't be extinguished just yet. Last year's results can also be tempered by the Vuelta a Venezuela running as a non-UCI race last year, too, as he won that to defend his crown from 2019. Overall, I think his problem is going to be along similar lines to guys like Carlos Barbero. He gets his best results in sprints after some obstacles and in more complex or uphill-but-not-too-uphill sprints, and for somebody with a fast finish he's pretty good uphill - I mean, he was 15th in the Tour de Hongrie without collecting any bonus seconds in the sprints, 17th on Mount Fuji in the Tour of Japan in 2019, and last year's Vuelta a Venezuela featured a not enormous but pretty reasonably-sized MTF at San Vicente de Nirgua, probably between cat.1 and cat.2 in most races (including Venezuela's own more mountainous races like the Vuelta a Tachirá and the Vuelta a Miranda). He also, back with Matrix-Powertag, was 2nd in the Pola de Lena stage of Asturias, with a 2km @ 10% climb close to the finish, ahead of Carapaz, so he may be more for the Felline/Gavazzi kind of mould than a Trentin which is where I'd kind of had him pegged before. He's also missed out in some races since joining Caja Rural because they've chosen to prefer the more proven Ion Aberasturi for the sprints.
Reactions: Sandisfan, Kazistuta and SafeBet

That finish was equal parts hilarious, dank and beautiful
T

I'd love to see the top guys do that finish in the Vuelta tbh. It's s beautiful finish

Beautiful finish. It would be cool to see it with a stronger field.

Edit: beaten to it

titan31 said:
I'd love to see the top guys do that finish in the Vuelta tbh. It's s beautiful finish
Click to expand...

I think it's unfortunately too cramped for a GT, even if that GT is the Vuelta.
T

Devil's Elbow said:
I think it's unfortunately too cramped for a GT, even if that GT is the Vuelta.
Click to expand...

Possibly but if they really want to, they could find a way I think.
Reactions: Sandisfan
B

Just watched the last 15 k. Hayter is a major talent in these mid level races. Interesting to see if he can take it to the next level.
I

I don't see today's finish as more cramped than the frequently visited murito at Valdepeñas de Jaén.
The narrowest point inside the fortress comes after they've been climbing for a while, with the last section on cobbles. I'm sure Guillén is going to send Escartín on a visit there.