Page 99 - Get up to date with the latest news, scores & standings from the Cycling News Community.
Sidebar Sidebar
Previous Next
M

Thus they now have the budget that is over TWICE all other teams except Katusha. Yeah, that's a really major problem.

oldcrank said:
A genius with a vision and not afraid of putting in the hard yards on a daily basis.
Click to expand...

The "Sir Dave", genius stuff and all the rest of this would be hilarious if it wasn't making me sick to my stomach.
Click to expand...

if only other general mangers had the fight within them like Sir Dave does then the peloton wouldn't be in the mess that its in, Sir Dave has shown there is money there, they need to go out there and find it....true British fighting spirit from Sir Dave

oldcrank said:
Sir Dave is obviously still committed to moving the sport forward into the 21st century, good on him. Also great to see that sponsors are out there...even in so-called "non-traditional" countries.
Click to expand...

So where are these monied sponsors for all the other teams? One team having twice or more the budget of basically every other team out there is not good for the sport.
Click to expand...

If Sir Dave can find a sponsor, what is stopping the other teams from doing so? He is obviously smarter than those in charge of some of the other teams, but he is also interested in moving the sport forward while some prefer staying in the past.
Click to expand...

You can't be serious, can you? So it's only a matter of being a genius? Interesting.
Click to expand...

Even if he were right, by now it should then be obvious there is (apparently) only one genius that is able to find all that money - so you'd still need a budget cap to avoid Sky/Ineos totally skewing the playing field.
P

oldcrank said:
Sir Dave is obviously still committed to moving the sport forward into the 21st century, good on him. Also great to see that sponsors are out there...even in so-called "non-traditional" cycling countries.
Click to expand...

Do British subjects/citizens feel obligated to refer to him and others that have been anointed as such as "Sir Dave" or is that just a personal choice?
Click to expand...

They hardly ever use 'Sir' unless in a formal setting. I certainly wouldn't use it in normal conversation.

oldcrank said:
Sir Dave is obviously still committed to moving the sport forward into the 21st century, good on him. Also great to see that sponsors are out there...even in so-called "non-traditional" cycling countries.
Click to expand...

Do British subjects/citizens feel obligated to refer to him and others that have been anointed as such as "Sir Dave" or is that just a personal choice?
Click to expand...

If I happen to see Chris Hoy down the shops I'd greet him with a nod, a Sir Chris, and a smile...but he is the only one from the cycling world at this point in time.

Exactly why their former doctor ordered a batch of testosterone that was delivered to their Manchester HQ remains unexplained but nothing, it seems, can derail Team Sky.

While weeks of preliminary legal argument were preventing lawyers from the General Medical Council interrogating the elusive Dr Richard Freeman in Manchester last month, having levelled the allegation that the banned substance was ordered to enhance the performance of an athlete, Sir Dave Brailsford and his senior riders were persuading Britain’s richest man to replace Sky as their new owner.

It was, sources claim, a brilliantly executed seduction that involved Geraint Thomas taking Sir Jim Ratcliffe for a spin on the climbs out of Monaco.

Ratcliffe and his son are keen cyclists, we are told. And they obviously enjoyed themselves, with the announcement Team Sky will become Team Ineos next season — as first revealed by Sportsmail — said to be imminent.

As chairman and founder of a petrochemicals giant that has made him £21billion, Ratcliffe is no stranger to controversy.

Last month he attacked the government’s fracking policy on behalf of Ineos and last year it emerged he was moving to Monaco’s tax haven. Two months earlier he was knighted by the Queen for ‘services to business and investment’.

Within his own team at Ineos, concerns were apparently raised. John Mayock heads up the sports division at the Ineos offices in London and one imagines the former Olympic middle-distance runner would have been concerned by the whiff of scandal that has dogged Brailsford and his all-conquering cyclists of late. Mayock was unavailable for comment.
Click to expand...

Everyone's off to Monaco! SDB should have had a chat with the Prince to become Team Monte Carlo - Geezus!

UGH!!!!! That is about the worst news the sport could get.
Click to expand...

They will be even more insufferable and no-holds-barred, won't they? :lol:

A "masters' triathlete" as main sponsor sounds promising too.
Y

I suspect this sponsorship will be similar to the Orica sponsorship of the then Green Edge team - Company will gain little commercial benefit but will provide goodwill with their staff.
B 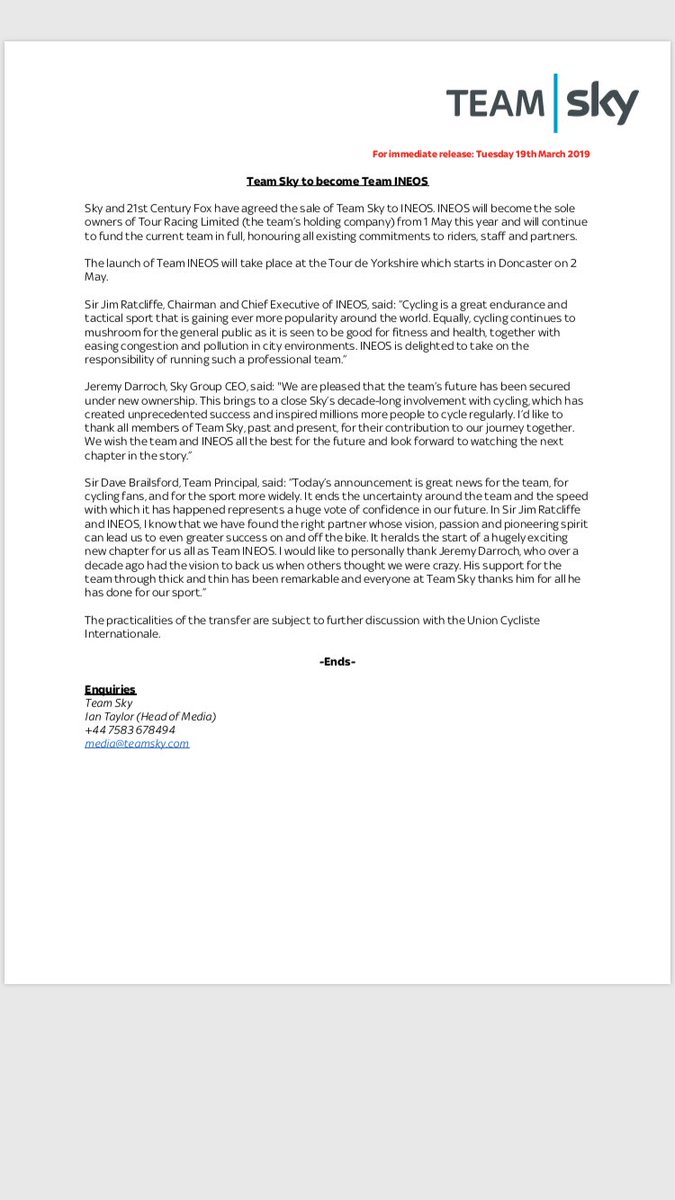 He wanted to be close the operations base of Froome & Co.

Sir Jim and sir Dave, what a team

Who can change the name of the thread, or should it wait until 1st may?
S


Singer01 said:
Who can change the name of the thread, or should it wait until 1st may?
Click to expand...

I think we should probably leave it until they actually change.

Sky with an even bigger budget. Great...


masking_agent said:
The "Ineos Train" will be drilling it for 2020
Click to expand...

From Skytrain to Chemtrails.


Dekker_Tifosi said:
Sky with an even bigger budget. Great...
Click to expand...

I'd rather they didn't have such a big budget...or rather that their budget matched the norm.

....whatever you think of Sky, you have to give them credit for finding such a wealthy sponsor. It is a pretty stunning achievement.

It appears that Comcast has found a way to not only get out of their contract even sooner, but to actually make money in the process. Leave it to Comcast to figure that out.

What a time to be a cycling fan

Ride as Sky in Romandie and Ineos in Yorkshire?