Teams & Riders The Remco Evenepoel is the next Eddy Merckx thread

Page 200 - Get up to date with the latest news, scores & standings from the Cycling News Community.
Sidebar Sidebar
Previous Next
G

Tomorrow's stage is similar to the one that he won in the Tour of Poland last year. The climbs are a bit longer. If he's fit, he should do well tomorrow. If he doesn't, it may be better for him to not finish this Giro.
Reactions: Big Doopie and SigurdJ

Rumour has it he didn't ride on the gravel, but through the gravel.
In order to avoid the bigger stones, he had to swarve around them and actually rode double the distance on the strade bianche.
Reactions: Big Doopie, Samu Cuenca and RedheadDane

GuntherL1 said:
Tomorrow's stage is similar to the one that he won in the Tour of Poland last year. The climbs are a bit longer. If he's fit, he should do well tomorrow. If he doesn't, it may be better for him to not finish this Giro.
Click to expand...

I don't see the similarities. The longest climb in that stage was like 5 km.
Reactions: Lui98, Samu Cuenca and Bonimenier
P

Big Doopie said:
it was stupid and risks hurting him psychologically.
Click to expand...

In theory he should have entered some races prior to the giro but there was no time to do so and missing out on the Giro again would have been bad psychologically. He said that his recovery was mentally very demanding so I am sure that facing challenges during the race is peanuts for him in comparison. He is the type that gets stronger when he faces challenges and adversity. He will learn from this and I am sure he will respond accordingly when his legs are feeling good. That's what he always does.
Reactions: Big Doopie

GuntherL1 said:
Tomorrow's stage is similar to the one that he won in the Tour of Poland last year. The climbs are a bit longer. If he's fit, he should do well tomorrow. If he doesn't, it may be better for him to not finish this Giro.
Click to expand...

I don't know about the differences but both are green on white background.
Reactions: Lui98, Big Doopie, SHAD0W93 and 1 other person

The Polish one is clearly the hardest. Just look at all those Cat 1 climbs!
Reactions: Sandisfan, Lui98, SHAD0W93 and 4 others

Right then. Think these are more than enough reasons for Remco to go solo from 50km. No chance he's gonna fail 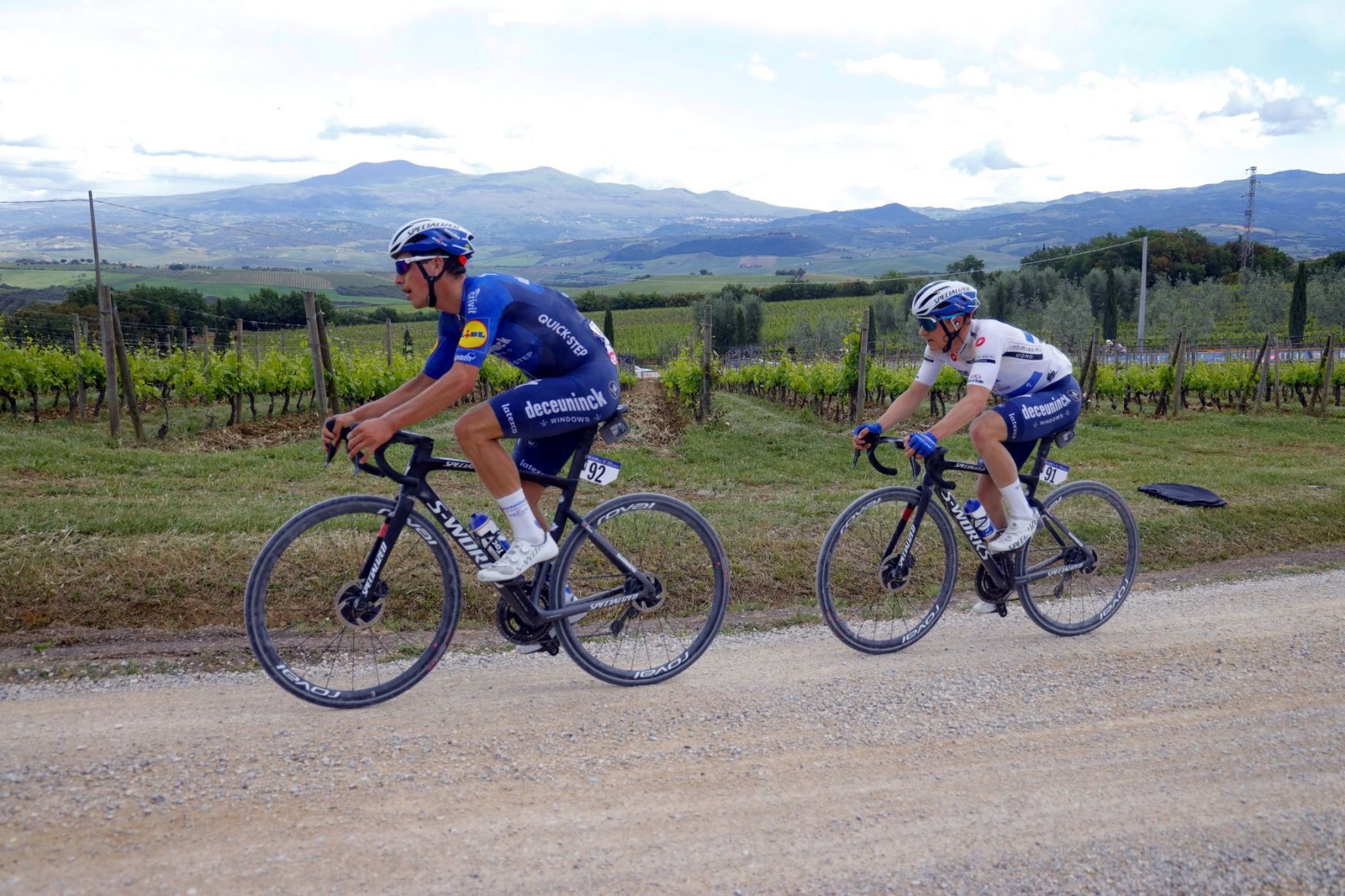 Almeida is only 1m77 himself vs Evenepoel's 1m71. When you look at this, you'd say Almeida is the size of van Aert and Evenepoel is like Higuita.


Red Rick said:
The flat on top of the final climb is perfect for Evenepoel

To limit the damage after the ~5 other climbers kick away from him on the steep part
Click to expand...

Logic-is-your-friend said:
Almeida is only 1m77 himself vs Evenepoel's 1m71. When you look at this, you'd say Almeida is the size of van Aert and Evenepoel is like Higuita.
Click to expand...

His body dimensions look weird to me. Short legs and arms.
Reactions: Lui98 and Logic-is-your-friend

Logic-is-your-friend said:
Almeida is only 1m77 himself vs Evenepoel's 1m71. When you look at this, you'd say Almeida is the size of van Aert and Evenepoel is like Higuita.
Click to expand...

Maybe they gave him some of that height-altering stuff Pidcock has been drinking.
Reactions: Sandisfan

I think some of you are really exaggerating negatively.
He's still in 7th place. He lost two minutes, not 15.
Before the race I didn't expect him to be in contention for the win because of the lack of training, but then I got drawn in a bit in the hype, not only by you, but also because his team sounded pretty confident (and you must be very confident for GC if you leave Alvaro at home!!).
But so far this is no reason to pull him out of the race, unless he feels very fatigued. In terms of results a top10 would always be very strong with this preparation. There are quite a few good guys behind him.
The way I saw it he lost the time on the sterrato (only), I didn't watch him all of the time, but I saw him losing like 15 meters once on one of the gravel descents, that was clearly not because his legs are generally bad (at this point), but of course the repeated effort and maybe also the mental side drained him.
Anyway, we will see how he does in the next days. There is no need to be overdramatic at this point, and in no way does it say anything about his future abilities. He wasn't totally cooked for good, he seemed to have caught himself after a little while. Maybe he did not only struggle with the technical side but also with the repeated short punchy efforts, where on tarmac he is able to hold on but on gravel you have less slipstream effect/ more rolling resistance.

About the Almeida thing, I still don't understand and would honestly very much like to know what was going on. Could Almeida really be so bastardly? Did the team fight before this stage? Or was it more like Carolina suggested?
Reactions: jflemaire, jmdirt, Panda Claws and 1 other person

Off day and bad legs forsure. But I'm quite shocked how bad he is technically.

at one point (where we saw Evenepoel really struggle going up a hill, while 2 FDJ riders passed him), I actually thought it was wiser that Almeida would just go (his own chance) as I saw Evenepoel almost cracking there.
Maybe Evenepoel also told Almeida some times to just go.

What is sure, is that Almeida doesn't have the helper instinct / reflex. When Evenepoel was losing contact with the group (for good), it took some minutes before he really lost contact. That was a very long time, and any other rider that tried to help his GC guy would already have been where Evenepoel was at that moment. The fact that Almeida just kept riding / holding his own position, indicates he wasn't really thinking about Evenepoel.

I'm kind of disappointed right now. Will try to post something later.
H

How did he not implode on the final climb? He did it faster than most of the front group did. Looked like he was blowing up, then he nearly catches some in the front group at the line

houtdffan said:
How did he not implode on the final climb? He did it faster than most of the front group did. Looked like he was blowing up, then he nearly catches some in the front group at the line
Click to expand...

Was it that famous magical caffeine-sugars-vitamines-ketons bottle in his pocket?
L

houtdffan said:
How did he not implode on the final climb? He did it faster than most of the front group did. Looked like he was blowing up, then he nearly catches some in the front group at the line
Click to expand...

He's always had good intrarace recovery. I think the gravel played a bigger psychological role in his struggles than most thought.

Remco should still be able to manage a top 5 if everything goes well, potentially more. We’ve already seen riders in the Giro ship time with the other gaining and the roles become reversed. Yes the hype was real but he is still performing well. I think the biggest question if he is at the TT with 1’30” behind Bernal if he is still able to outperform him in the TT and or will he be too fatigued.

I do agree about the false flat thingy, but was looking more at the entire post from Blue fridge in a Tree (or whatever the username is). After your reaction to my post I cannot help thinking you are starting to sound a pinch bitter. Like, are you the forum police or something? I read these threads a lot and with a lot of interest and try not to get tempted into commenting out of emotion (that is not always easy as discussions get heated and I admit I have made some ignorant posts now and then). So mostly I refrain from commenting all together. However with you I noticed a pattern of 'correcting' (more like attacking) other posters. You have very intelligent and informed posts, but I do think you take a bit of a bully position at times. Logic and facts are useful, but the way you deliver them to others is just as, if not more, important. Do with it as you wish but I felt the need to respond.
Click to expand...

Look, I was following this on Eurosport PT...And we've all honestly been curious about what JA would do after last year's Masnada debacle (it really is a running joke at this point), so I was pretty focused on seeing what was happening between those two on the road.

So what I saw all the while was Remco holding on for dear life for the whole duration of the sterrato sectors. He had at least JA and Serry with him. At one point they fall into a split and Serry pulls along with JA. After this Serry is cooked and gone. Remco is now alone with JA.

Then they're all in the smaller bunch with the maglia rosa for a while. Remco is in the back half all the while. You'd expect JA to be with him all the while, but nope - he's right at the front. If he wasn't 4 minutes back and in a helper role you'd say he was riding like a champ. So when Remco finally is dropped, he's still way out in front and doesn't drop back until Remco is about 20 seconds behind the main group (at least that's when we noticed him missing from the front).

Then he drops back, takes a pull and drops Remco again. Then drops back AGAIN and pulls him to the finish. In between this, Remco throws the earpiece out.

So to be consistent vs. Masnada last year...JA was, at best, an unwilling helper and at worse actively sabotaging Remco. The only other option is some Movistar-level team strategy. He did nothing to secure Remco's 2nd place and in my honest opinion, he still thought he had a shot at a top10 (not that unrealistic) and did not want to drop back. Hell, I saw much of the same on stage 10 right at the end. Remco dropped back in the tunnel and JA was out front talking on the radio and looking over his shoulder - I honestly thought he was about to attack then and there.
You must log in or register to reply here.
Share:
Facebook Twitter Reddit Tumblr WhatsApp Email Link