When is the smackdown on Chris Horner?

robow7 said:
OK, what am I missing here?
Click to expand...

Yeah my bad. Messing him and Levi up - and Levi isn't racing.

Still weirded out how Horner is riding so much better than Evans.

Dear Wiggo said:
Yeah my bad. Messing him and Levi up - and Levi isn't racing.

Still weirded out how Horner is riding so much better than Evans.
Click to expand...

I have no doubt (caveate | pure speculation).

Last year with the slow payments, etc. and the political (climate) of the time...

That riders on RS were given sweetheart deals, i.e. Talk Sugar.

Horner took the deal and two things happened, he got to ride in the Tour and he put himself in a favorable position for a 2013 contract.

The current BS is simply him assuring and following through on his 'commitment."

Any other explanation for another 'nice guy' supporting omerta is ludicrous.

All of the pros stating they are shocked and were unaware of the stench, rode in the stench, held their breath and held onto a paycheck.

The sport is and was (1998 to the present) men in spandex diapers riding bikes. WWF. NFL. MLB. etc.

Say the right thing, get paid.

It is a shame.

I miss the Lemond years and want them back.
Click to expand...

Sad but true. And he had talent back when Lance, Carmichael and Och froze him out because he was better than Lance.
G

didn't steve tilford backhandedly out horner in one of his blog posts? maybe it wasn't him, but i recall some former racer managed to implicate horner without actually naming him.

anyways, it seems like horner targets these 1 week stage races more than others. tour of california, last year's 2nd place in t-a, this year's impressive performance etc seem to indicate this. what 'targeting' implies is anyone's guess though.

one thing i've never seen is a watts/kg estimate on levi and horner up baldy in 2011. i was on the mountain watching, and it was a fairly straightforward climb, little/no wind, weather was ideal, and there's only one flat section that might screw up calculations.

Dear Wiggo said:
Horner and Evans have basically the same amount of time off over summer: 6-7 months. One is sick, granted, the other suspended for past doping.

Horner @5-6 years older is smacking Cadel for 6.
Click to expand...

And Horner was Cadel's super domestique in 2007. That should say enough.

I knew in 2009 when Lance came back he'd be alright. After all Horner and Leipheimer were the guinea pigs for Lance's new program. Look at how effective it was. Between them they clean up the Tour of California quite a few times. Made an absolute mockery of the sport there in 2011 and didn't have the nads to ride doped last year and thus got spanked.

Sure Horner is arguably acting as he has done partly to feed his kids and put food on the table but he's taken it way too far. When the proverbial poo hits the fan, I hope he wears it all.
W

Horner didn't do too badly last year...probably one of his TOP3 year's in the peloton...but let's chalk that down to another baseless and uninformed clinic accusation.


Dear Wiggo said:
Yeah my bad. Messing him and Levi up - and Levi isn't racing.

Still weirded out how Horner is riding so much better than Evans.
Click to expand...

Confusing Horner with Leppy?! How is this even possible unless you know next to nothing about cycling don't you, but we'd already figured that out in the JV thread with all your outlandish and baseless accusations...

webvan said:
Confusing Horner with Leppy?! How is this even possible unless you know next to nothing about cycling don't you, but we'd already figured that out in the JV thread with all your outlandish and baseless accusations...
Click to expand...

Whatever dude. As I was out doing my second ride for the day, I was thinking: some dipstick is going to try and put the boot in. Here you are, right on cue. Chapeau.

Given JV's gaffs in his own thread I'd say we're even at best, or he's down given his alleged expertise and "first hand experience".

Feel free to list the posts where I am make "outlandish and baseless accusation", or are you all talk? Likely you're just copying MO of other posters who can't actually quote posts or post links to them. Well done. *golf clap*

Do you even ride a bike?

webvan said:
Horner didn't do too badly last year...probably one of his TOP3 year's in the peloton...but let's chalk that down to another baseless and uninformed clinic accusation.
Click to expand...

Not bad for a 41 year old. I suppose you think that's perfectly normal, right? 41 year olds carving up the peloton?

Really ? Looks like you didn't even read the post above mine, so read it, read up on cycling and let people who know about cycling do the talking, you're now on my ignore list where I should have put you long ago, like JV did. Interestingly you stopped polluting that thread over there after that...

webvan said:
Really ? Looks like you didn't even read the post above mine, so read it, read up on cycling and let people who know about cycling do the talking, you're now on my ignore list where I should have put you long ago, like JV did. Interestingly you stopped polluting that thread over there after that...
Click to expand...

So that's no, you can't post links or quote posts with outlandish and baseless accusations. I stopped posting there because there's nothing new. No new lies from JV - they are all the same lies as before.
W

Dear Wiggo
This message is hidden because Dear Wiggo is on your ignore list.
Click to expand...

Best news of the day!

Dear Wiggo said:
Not bad for a 41 year old. I suppose you think that's perfectly normal, right? 41 year olds carving up the peloton?

Now 41 years of age, Horner confirmed that he is in the final year of his current contract with the RadioShack Leopard team. That motivates him to do his utmost to clock up some good results before the end of the season, particularly as he wants to remain part of the current setup.

“I very much like the team here. Of course we are going to have some sponsorship changes and stuff like that, but hopefully the team continues,” he said, acknowledging the current uncertainty about its future. “I think they have time to sort it out - I would imagine that nothing needs to be done until the Tour time or after the Tour.

“Clearly I enjoy working with Luca [Guercilena, general manager] and everyone knows that Alain [Gallopin] and I are very close friends off the bike and stuff like that too. I am very, very comfortable with this team, the riders and the staff and everything.”

Asked if his plans to race in the Vuelta a España are about using the race to build up for the world championships, he is clear that he wants more than that.

“I have got ambitions,” he said, dismissing any suggestion that the race would be a training block. “Absolutely. I would imagine at this point in time I am looking at doing the Tour of Utah, then after Utah I fly over and to the Tour of Spain. I believe I can be in very good shape by then.

“Of course we have Frank Schleck coming back for the Tour of Spain, and I believe Andy will probably do it too. My objectives are that someone from the team will be riding very high on general classification, and hopefully we have somebody who can actually win the race.

“After that, the worlds is definitely a goal. It’s a hilly course and I want to go well there. The plan is then to finish off the season in Lombardy. There’s a lot of racing left, and so that is why it is so important for me to not take risks and have the knee flare up during the Tour de France. The best option is to miss that, take more time to recover, and then ride well in the Tour of Spain.”

What do you expect him to say?

"I hope to come back and stink up the joint?"

When you come to work do you say that to your boss?

wrong question: When is the smackdown on Chris Horner?

blackcat said:
wrong question: When is the smackdown on Chris Horner?

right question: When does Chris Horner gonna bring the smackdown?
Click to expand...

If, by smackdown you mean convincing your employer to pay you as long as possible; it's on!

Chris Horner is a spectacularly talented bike racer who missed out on racing in Europe for much of his career and now wants to cash in at the end.

It's hard to blame a guy in his position. Had the dopers not been around, this guy would have been a GT champion.
I

It would have been better if he had stuck with Cadel Evans. I remember him helping TVG in Dauphine. Probably may go to BMC next year.

too funny, too funny.

horner goes nude for all the ladies.

and he has hair. 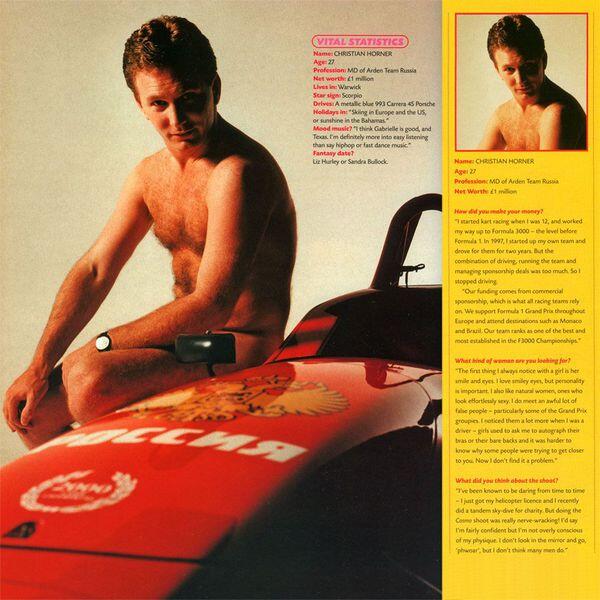 By the way will it ever be USADA and then Garmin for him next?

Making a mockery of cycling again.

Sort of want to see him take it all the way now.
W

Thanks for saving me the trouble of looking up that thread...looks like he's back to his ToC 2011 level, cool!

In fairness, nobody chased him.

I still hope that it was just Vomistar at their hilarious worst and when it comes to real climbing he won't have it so easy.
F

He hasn't doped since needing it to get back from injury in 2006 or whenever it was.