Page 5 - Get up to date with the latest news, scores & standings from the Cycling News Community.
Sidebar Sidebar
Previous Next
C

Tactically i am not sure if Jan Tratnik being involved in early breakaway helped Bahrain McLaren all that much. It basically eliminated the whole advantage of having a strong team. Roglič had some good support in Grischa Niermann, getting Luka Mezgec on their side, for chasing the breakaway, Pogačar had Jan Polanc. The whole race was a fast paced one.

A brother of Tadej Pogačar was competing too, Tilen Pogačar. Tilen left cycling for 6 years and as a big brother he likely had something to do with Tadej competing. Thanks Tilen! There were in total 4 pair of brothers in this race. We got to see some Flanders alike narrow and bumpy roads.

Finally, when they started climbing, the selection happened quick. A group of five could still cope. Roglič attacked, caught and overpass Tratnik and waited for Pogačar. This was it, the moment we have all been anticipating. They both tested the waters a bit, finally Roglič attacked and Pogačar couldn't follow. All in all it was a good race and it didn't disappoint. I feel that currently Roglič is in great shape and he had good control over the last stage of the race. Becoming the national champion for the first time. There will be plenty more chances to become one for Pogačar in the future.

P.S. Can't wait to see this duo competing in TDF this year.

The decisive moment of the race
Reactions: Lequack and Logic-is-your-friend

johnymax said:
The decisive moment of the race
Click to expand...

Better quality footage than the broadcast ;-)

Some watts from yesterday 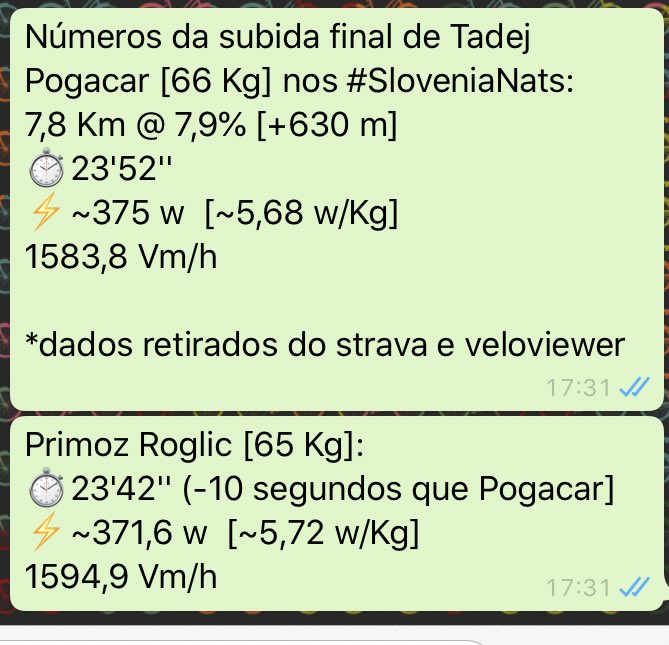 CyclistAbi said:
Tactically i am not sure if Jan Tratnik being involved in early breakaway helped Bahrain McLaren all that much. It basically eliminated the whole advantage of having a strong team.
Click to expand...

It did not help them in the end, but it was their best chance I would think. Their only chance actually, not by truely outnumbering, but by simply having Tratnik in the break, so that if that break had gone further, Tratnik would have won. (I would have loved that. )
Reactions: janraaskalt

Lequack said:
Some watts from yesterday

I saw that Pogi's knee was a bit banged up on the podium and it turns out that he had crashed before the final ascent. 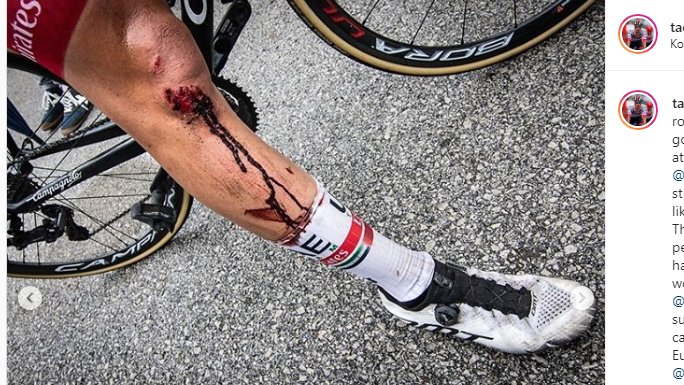 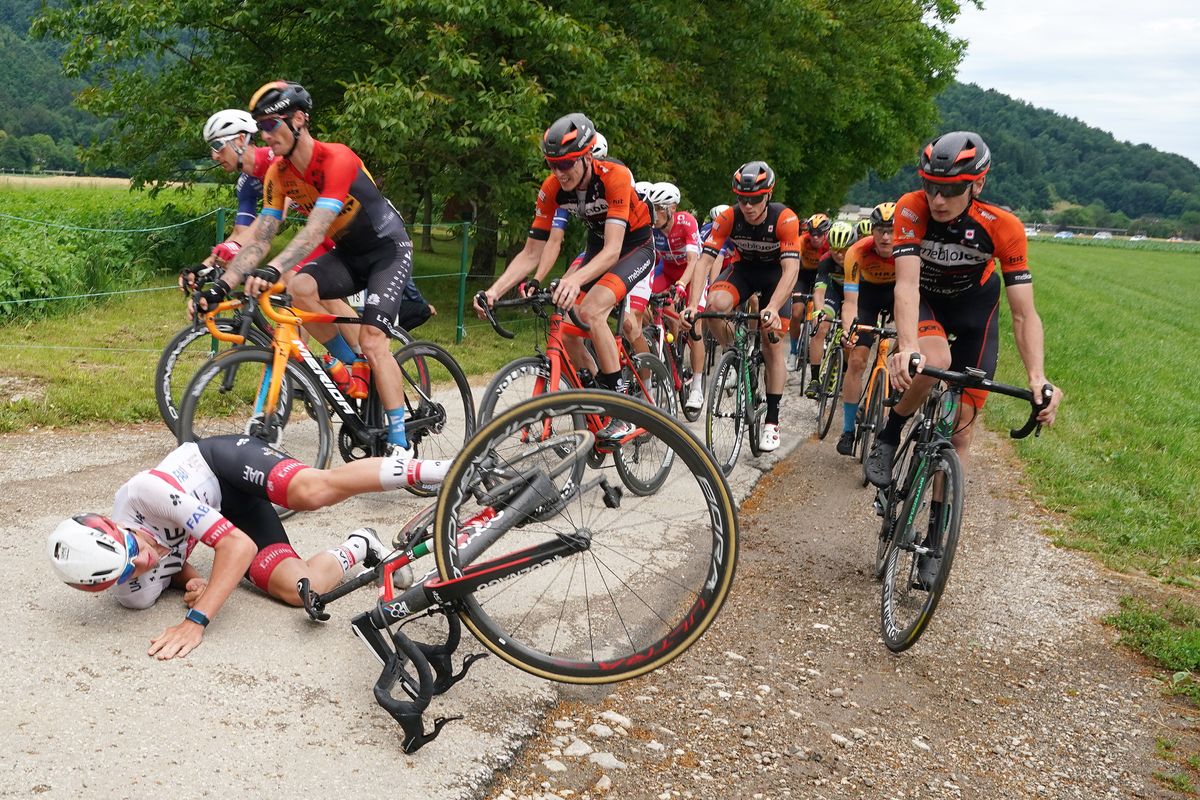 Pogačar crashed at the end of the third (out of seven) lap. He said it didn't affect him all that much after. What some forget is Pogačar is 21 years old and Pogačar did become national champion yesterday, category under 23 years. Roglič more or less didn't have much chance to compete in that category, starting cycling at the older age. Roglič has participated in national championship seven times, before securing the win. He currently is ranked as No.1 pro cyclist in the world.

All in all i feel that both are happy.
Reactions: Sandisfan

Lequack said:
Podium. It seems Pogacar did have a fall at some point in the race. 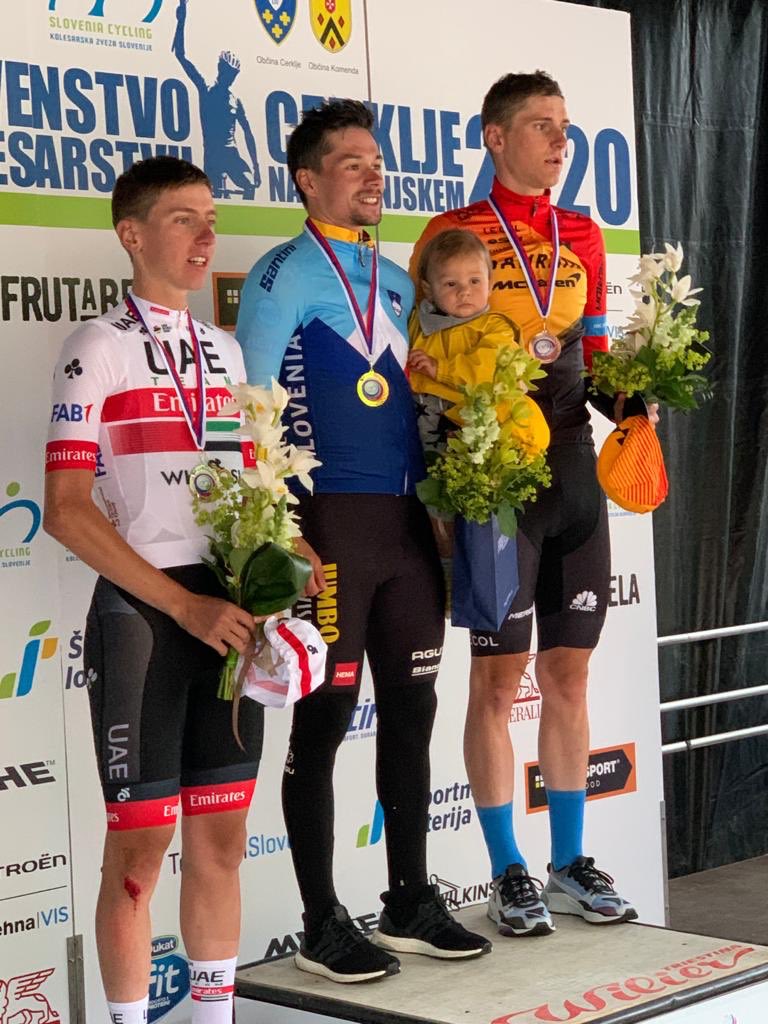 Breezy1985 said:
That kit is alot nicer than the actual national champions kit design the teams use
Click to expand...

I dunno. Jansen's Norwegian kit is quite nice. And so was the Danish kit they gave him as a prank. 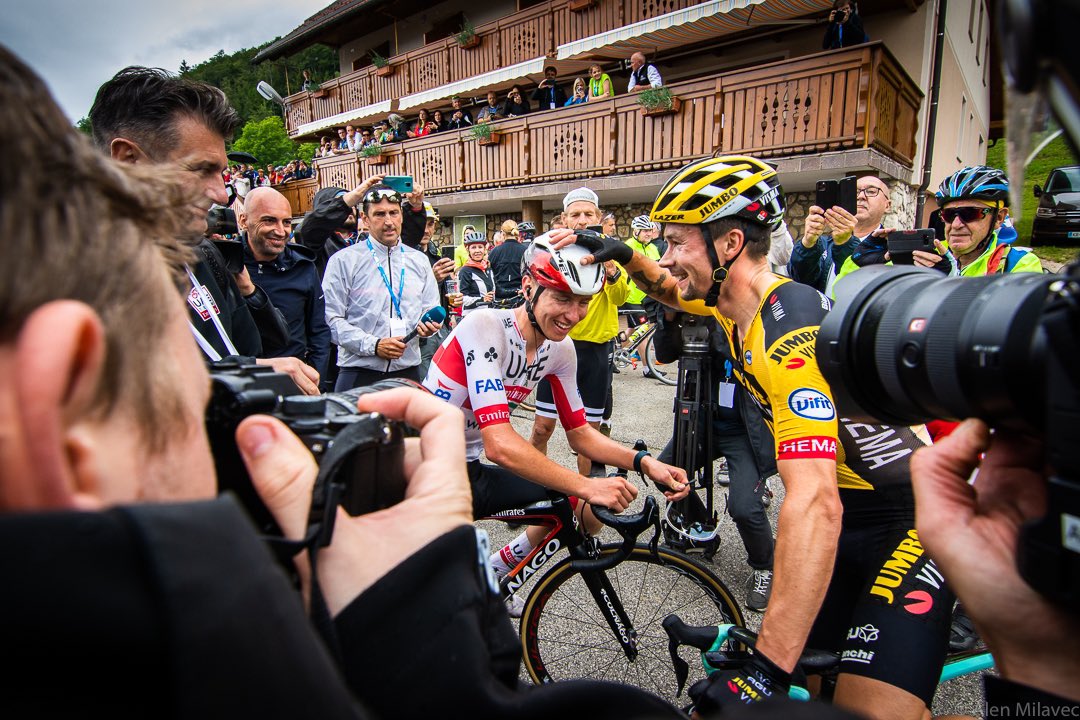 Also a replay of the last 10km is here:
View: https://www.dailymotion.com/video/x7ul368

Lequack said:
Also a replay of the last 10km is here:
Click to expand...

It would have been funnier had you just posted a picture instead of a video.

RedheadDane said:
I dunno. Jansen's Norwegian kit is quite nice. And so was the Danish kit they gave him as a prank.
Click to expand...

I meant nicer than the Slovenia NAT champs kit

Breezy1985 said:
That kit is alot nicer than the actual national champions kit design the teams use
Click to expand...

Quite nice, but I do like that muted shade of green that Slovenia seems to use as a national colour.

Huh? Have we actually seen that yet?

RedheadDane said:
Huh? Have we actually seen that yet?
Click to expand...

This is the one he wore when he was a national ITT champ, back when it was still LottoNL Jumbo They might have wisened up since then. Could happen, I mean... even Movistar has learned how to make a proper Nat champ kit!
Reactions: Breezy1985

RedheadDane said:
Huh? Have we actually seen that yet?
Click to expand...

I hope it's not geo blocked. Climb starts at around 12min.
Last edited: Jun 23, 2020
Reactions: TourOfSardinia, CyclistAbi and Lequack
C

Nice video with all key moments included and in good video quality. This really was a great race and it had everything a great race should have.
C

Doesn't look like ITT will get broadcasted or streamed. Too bad.

Fun fact: De Marchi has crossed the border and will race the TT to get some racing/TT kms in his legs.

There is some coverage on Val 202 (radio). No intermediate times though.

Pogačar (and most other riders) will use road bike for the first 9km and after switch to TT bike, for the last 7km. Roglič will be using TT bike through the whole race.

No videostream? I mean €5 quality footage ;-)