Page 4 - Get up to date with the latest news, scores & standings from the Cycling News Community.
Sidebar Sidebar
Previous Next
D

Mos, the town of Oscar Pereiro, will host the start of the 18th stage. According to the local newspaper, it will be one of three stages in Galicia. Given that Mos is located in the southwest corner of Galicia, I guess it will be the final Galician stage (to Luintra), with a flat stage 19 and stage 20 in the mountains in Salamanca province. The real question is what the third Galician stage will be, perhaps Ancares is in the route after all, if there actually is a third Galician stage (doesn't fit extremely well).

The second week will have a flat stage from either Miranda de Ebro or Castrillo del Val to Aguilar de Campoo. The stage should be between the Valdegovia and Suances stages. With stages 16 to 18 seemingly in Galicia, it will probably be either stage 11 or 12.

The route should be something like the one below. It's possible that Laguna Negra is stage 6, Moncalvillo is stage 10 (in which case, move the following stages one ahead) and either La Camperona or the first Galician stage is out.
Week 1
Stage 4 Irun - Arrate (MTF with Karakate and Arrate)
Stage 5 Pamplona - Lekunberri (mountain with San Miguel de Aralar)
Stage 6 Logroño - Moncalvillo OR Laguna Negra de Urbion (MTF)
Stage 7 Soria - Ejea de los Caballeros (flat)
Stage 8 Huesca - somewhere in the Pyrenees around Jaca or Sabiñanigo (easy mountain stage, possibly MTF)
Stage 9 Jaca, Sabiñanigo OR Biescas - Tourmalet (MTF with at least either Somport or Portalet, then Aubisque and Tourmalet)
Rest day
Stage 10 Vitoria-Gasteiz - Valdegovia (mid-mountain with Orduña)
Stage 11 Miranda de Ebro OR Castrillo del Val - Aguilar de Campoo (flat)
Stage 12 Castro Urdiales - Suances (flat or mid-mountain)
Stage 13 Somewhere in Cantabria - La Camperona (MTF)
Stage 14 Cistierna? - Angliru (MTF, should have at least two cat. 1's before Angliru)
Stage 15 ? - La Farrapona (MTF, probably through San Lorenzo)
Rest day
Stage 16 (could also be before the restday): Somewhere in Galicia, either Ancares or something (much) easier.
Stage 17 Muros - Mirador de Ézaro (ITT with HTF)
Stage 18 Mos - Luintra-Ribeira Sacra (mid-mountain, should be the same finale as 2016 and 2018)
Stage 19 Somewhere in Zamora - Ciudad Rodrigo or somewhere else in Salamanca (flat)
Stage 20 Ciudad Rodrigo or somewhere else in Salamanca - La Covatilla or somewhere nearby-ish (mountain)
Stage 21 Madrid parade (flat)
Last edited: Dec 7, 2019
I

According to Radio Vigo, the stage starting in Mos will go to Puebla de Sanabria and will be 255km long. 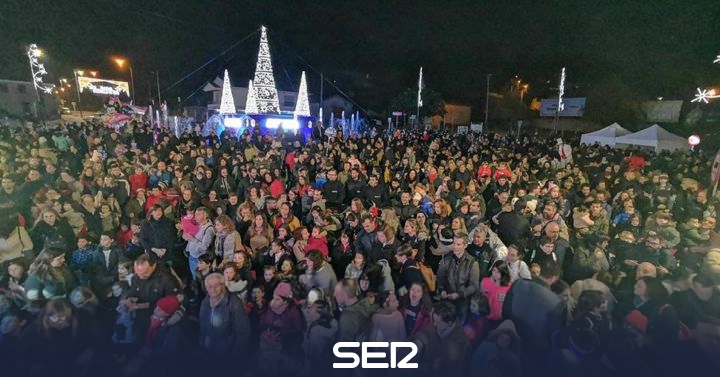 What Vuelta is this
I

It also says the Galician stages would be 11, 12 and 13 when the newspaper is saying it's stage 18.. Again, doesn't fit with Vitoria-Valdegovia in week 2, and a 255 kilometer stage seems weird. Furthermore, according to the article, there would be no stage finishing in Ribeira Sacra contrary to previous rumours, so doubt the rumour is true tbh.
I

Cadena SER and AS.com belong to the same media group. It looks like they're posting as news whatever they grab from internet forums and blogs. In this case, from this blog.

ice&fire said:
Cadena SER and AS.com belong to the same media group. It looks like they're posting as news whatever they grab from internet forums and blogs. In this case, from this blog.

I think we should try to make the newspapers in this thread.

Why does La Vuelta al most never visit Portugal anyway?
I

It can only be lack of interest/money on Portugal's side.
F

the portuguese article says that in 2016, Porto negotiated to be part of Vuelta, and if I remember correctly was to be the starting city, but the values were too high.
and now, there is the possibility, because they are asking for less.
W

Clinic reasons - the testing is too rigorous across the border
Reactions: Rollthedice, perico, Koronin and 1 other person
I

According to regional media in Galicia stage 17 will finish at Ourense and stage 18 wil depart from the same city.
Stage 17 will go through the Ribeira Sacra region. Unlike the '16 and '18 editions when the stage finish was close to the climbs around the River Sil canyon, going to Ourense will add 20km of shallow descent and the possibility to end in a murito climbing the hills that sourround the city.

That's an underwhelming final week, even if internet pundits are entertaining the idea of having Alto da Torre on the way to Ciudad Rodrigo at 120kms from the finish.
Last edited: Dec 15, 2019

Weren't many complaining about this year's final week of la Vuelta before they raced it? It seemed to be a good final week.

Koronin said:
Weren't many complaining about this year's final week of la Vuelta before they raced it? It seemed to be a good final week.
Click to expand...

I generally liked the idea but thought the climbs were a little too easy to pull it off. The penultimate stage really blew my mind
Reactions: Koronin
I

Koronin said:
Weren't many complaining about this year's final week of la Vuelta before they raced it? It seemed to be a good final week.
Click to expand...

Red Rick said:
I generally liked the idea but thought the climbs were a little too easy to pull it off. The penultimate stage really blew my mind
Click to expand...

I also thought it was a good idea even if the climbs were not too hard. But there were two mountain stages with a flat stage in between, so there was no waiting for tomorrow in the first one and there was good racing in both of them.
This year we only know of one mountain stage in the last week, and La Covatilla does not anticipate serious racing far from the finish.

Yes but the stage inbetween wont always be an insane echelon stage, so I think the final mountain stage overdelivered cause everyone was so dead
I

The insane echelon stage was before the first of the two mountain stages. The inbetween stage was neutralised after Roglic crash

ice&fire said:
The insane echelon stage was before the first of the two mountain stages. The inbetween stage was neutralised after Roglic crash
Click to expand...

Still had a good amount of crazy racing, hardly a rest day.

When is the announcement, anyway? Seems like I read somewhere it'll be before Christmas.
D

christopherrowe said:
When is the announcement, anyway? Seems like I read somewhere it'll be before Christmas.
Click to expand...

Stage 6 will be from Lodosa to Laguna Negra. Stage 7 will start at the archeological site of Numancia, just north of Soria, so the Moncalvillo MTF will be on stage 10 or maybe stage 11 (alternatively, no Moncalvillo, and La Camperona before Angliru and Farrapona, but seems unlikely at this point). So, of the stage finishes, stage 20 looks the least certain right now, together with stage 8. Furthermore, we don't really know where both Asturian mountain stages and the Madrid parade start, and stage 9 and 12 still have two or three options that are close to each other. Everything else seems more or less on lock by now.
Y

A number of riders have commented the Vuelta was the hardest GT in 2019 - In recent times it always provide a fair and challenging route.
I

AS.com has posted the course. In an epic Freudian slip the editor writes about 'fin de (end of) siesta' instead of 'fin de fiesta' 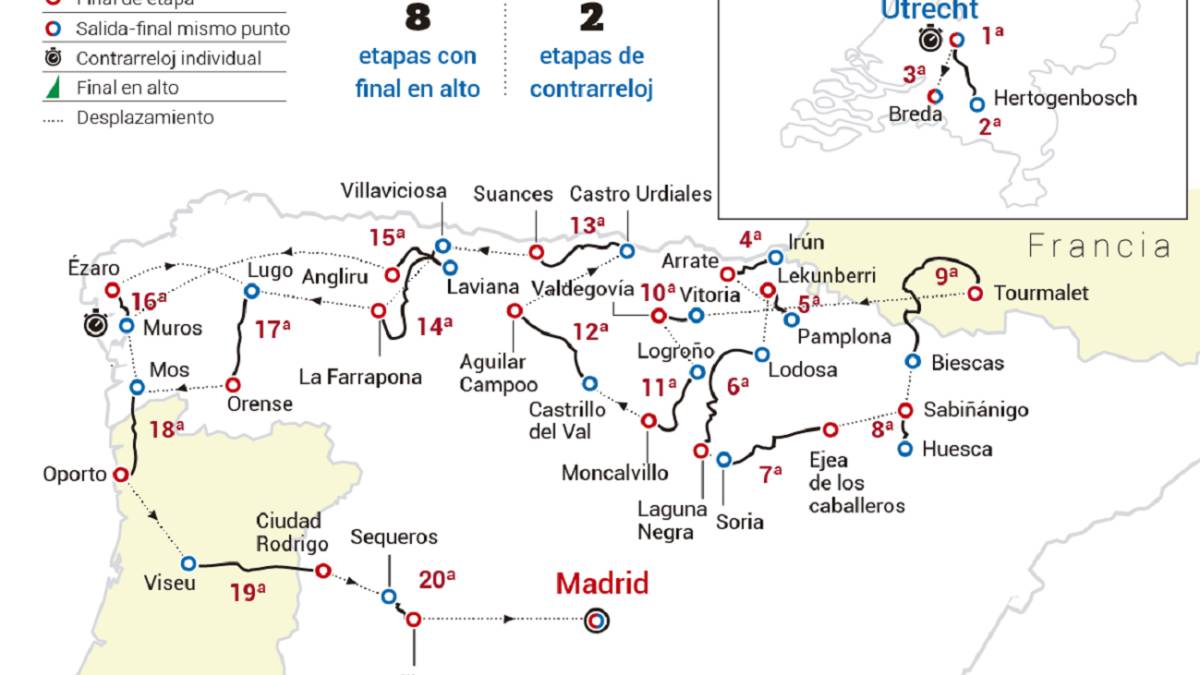