Page 5 - Get up to date with the latest news, scores & standings from the Cycling News Community.
Sidebar Sidebar
Previous Next
D

Marca have posted a slightly different route, albeit also with Farrapona before Angliru. Looks like a summary of what we already know, based on the fact that the differences are in the less certain stage towns (finish stage 8, starts stages 7, 9, and 15)

Both maps are the result of throwing some dots at approximate locations of the corresponding sites and connecting them at random.
Just looking at Marca's map Lekumberri is not NW of Pamplona, Moncalvillo is not West of Laguna Negra and I doubt they are climbing Tourmalet from the South. Our Portuguese friends will be wondering where's that Matoshinos town hosting a stage finish.


looks a bit wrong without Cordal
I

Wait until you see the stage length

Devil's Elbow said:
Marca have posted a slightly different route, albeit also with Farrapona before Angliru. Looks like a summary of what we already know, based on the fact that the differences are in the less certain stage towns (finish stage 8, starts stages 7, 9, and 15)
Click to expand...

Absolutely no stages designed for anything else than attacks within the last 5-7 kms? Boring!
D

Yep, this is in danger of being a very poor route unfortunately. You'd think they would have learned lessons from this year...
M

Matosinhos would be a let down. We need a finale on Avenida dos Aliados.

Max Rockatansky said:
Matosinhos would be a let down. We need a finale on Avenida dos Aliados.
Click to expand...

Well, to be fair, given the past history of Rui Moreira ahead of the Porto municipality, I'm not seeing them closing the entire town centre to traffic on a thursday afternoon, unfortunately. The city would turn chaotic.

I remember a GP JN that was moved from the city centre to the suburbs due to that and a casting of the portuguese cooking talent show Masterchef scheduled to Avenida dos Aliados being canceled due to the needs of shutting down traffic.

Such is the dissapointment with the 2020 route yet to be announced that we're looking forward two years in advance
Reactions: Red Rick

ice&fire said:
Such is the dissapointment with the 2020 route yet to be announced that we're looking forward two years in advance
Click to expand... 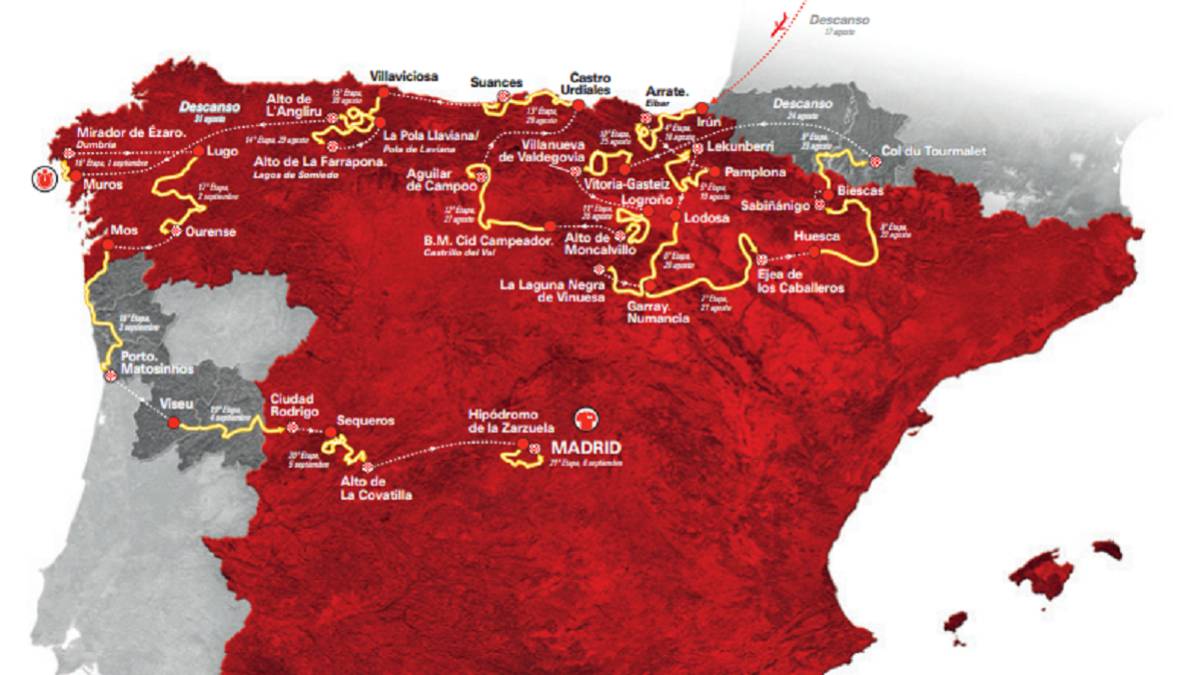 The proposed Asturian stages are a dumpster fire.

Stage 4 doesn't look too bad - plus a couple of features I like: 1) Arrate given the correct appropriate categorization, and 2) Karabieta leading directly into it, which bizarrely is never even used in País Vasco as they always seem to like climbing Karabieta north. Would have liked to see Etxauri in stage 5, but that's generally a pretty well designed stage with a descent finish coming off the back of the opening MTF, so thumbs up for this. Unfortunately it's followed by a terrible mountain stage which overcategorises the MTF and doesn't use any of the not-spectacular-but-at-least-ok lead-in opportunities. As PRC shows, much more can be done with Urbión. Quite a lot more.

Stage 9 can die in a house fire. Aubisque AND Tourmalet - as an MTF - in a sub-140km stage, and emerging from their July homes to infect other races too? You may as well spit in my face. I could not possibly be less enthusiastic about a "queen stage". PS, if any race organiser tries to claim a stage less than 150km long to be a "queen stage", they should instantly be allowed to be pelted with fruit by cycling fans and personally slapped in the face for one final moment of humiliation by Angelo Zomegnan.

Stage 10 is a very stupid design but a good finale. Then we have another not-as-good-as-it-could-have-been stage to Moncalvillo, before two flat stages, then the dumpster fire of a weekend in Asturias, with a 109km Angliru stage. At least swap them round and create the pretence that something will happen on La Farrapona, you know? Every time they use it, they neuter it by putting Angliru the next day. The rest of week 3 is pretty meh, but at least they've gone back to trying to do something with La Covatilla.
Last edited: Dec 17, 2019

This is really, really horrible.... I have liked the routes the previous years and I think the Vuelta has done a good job creating exciting racing by limiting flat stages, but this design is just so freaking bad. Vuelta a norte Espana + useless and pointless NL and and useless and pointless Portugal.
Reactions: Red Rick

A drunk monkey would have done better.
M

This looks like the worst GT route ever to me.
I

Frontloaded. That last week spoils it all. 2011-level bad.
D

That's just dire. Worst GT route since the 2017 Tour, and even that may have been less bad than this. The fact that it's the best route for sprinters of next year's GTs says it all really.

I'm not sure the disappointment is the right way of expressing excitement about the route.
A remote tie with the cycling heartlands is fitting every now and then as is the conquest of the new ones.
España Verde is beautiful and a lot more racing friendly during the holiday season.
We'll see what the field will look like and what the riders will make of this route right between the Olympics and the Worlds.
K

This is really underwhelming for a Vuelta route. The last week is really bad and even the other two weeks are less hard than usual with too many sprint stages. There aren't even the usual uphill sprint finishes or medium mountain stages. The sprinters are the only ones that will like this

Well if a sprinter ever wanted to win la Vuelta's Green jersey this is the year for it.

Apparently Valverde likes the Vuelta route. He seems to think it suits him well.