Here is a brand new one from Post Danmark Rundt today:

The Blues said:
Here is a brand new one from Post Danmark Rundt today:

And some nice trolling by Greg Henderson later on.

^ I was gonna post just about that. It was hillarious.

Wow, Henderson actually looked back and saw the real cyclists and then he decided to raise his arms. So moronic, he should have been kicked out for sure.

Do you think he fooled Guardini?
M

Geraint Too Fast said:
Do you think he fooled Guardini?
Click to expand...

Aijj! I missed the bit with Henderson! I heard the speaker talk about it, but I couldn't actually see it.


I... couldn't actually see the one with Boaro either.

false celebration has become a kind of fashion now
esp with so many stages ending in circuits.

I have a bit of an explanation as to why it sometimes happens, this is particular for the Boaro-incident yesterday.
Basically they enter the circuit, ride almost the entire circuit before crossing the line to begin the three circuits. Maybe Boaro simply thought they were counting the circuits from the moment they entered the circuit. I and the people standing next to me certainly had our doubts

About the Henderson-incident (and yes, I know he was kidding!); it took a few seconds for me to realise that him and his companions were not, in fact, in the front about the time it took for the peloton to arive a few seconds later.
P

New addition to this thread from the world of cyclo-cross: 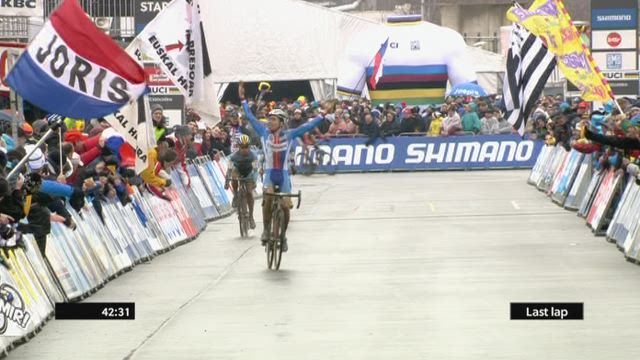 
Ruudz0r said:
Maybe a longshot but have there also been guys winning who didnt knew they won? (without disqualifications)
Click to expand...

too soon too soon


PeterB said:
New addition to this thread from the world of cyclo-cross:

This was so sad, and he came so close to winning still I'm sure if he had conserved that energy for the last lap, he'd have won
S

What an enjoyable thread!! haha

Tony Martin at the Tour 2011 did a nearly too early celebration. Evans was closing in but he lost by 6 seconds. Gorilla is the latest addition...

Although to be fair, his celebration didn't cost him the win.


Ruudz0r said:
Maybe a longshot but have there also been guys winning who didnt knew they won? (without disqualifications)
Click to expand...

One for the new season: