Page 140 - Get up to date with the latest news, scores & standings from the Cycling News Community.
Sidebar Sidebar
Previous Next

It turns out the Jumbo train circa 2020 might have actually been the only thing which worked against Pogacar.

People might not like it (or want to hear it), but 5 guys riding super hard tempo, destroying the favorites group & minimizing chances of an attack on the climbs actually prevents the sort of stuff we just saw from Pogacar - or at least contains it.

Carapaz just got exploded as did everyone else because they were by themselves & defenceless.

I also hope people get to see those images of Roglic enjoying the support of the crowd when he dropped back to the gruppetto & was riding alone on the cat 3 climb early in the stage.

He took his glasses off & smiled a bit. It was good to see. 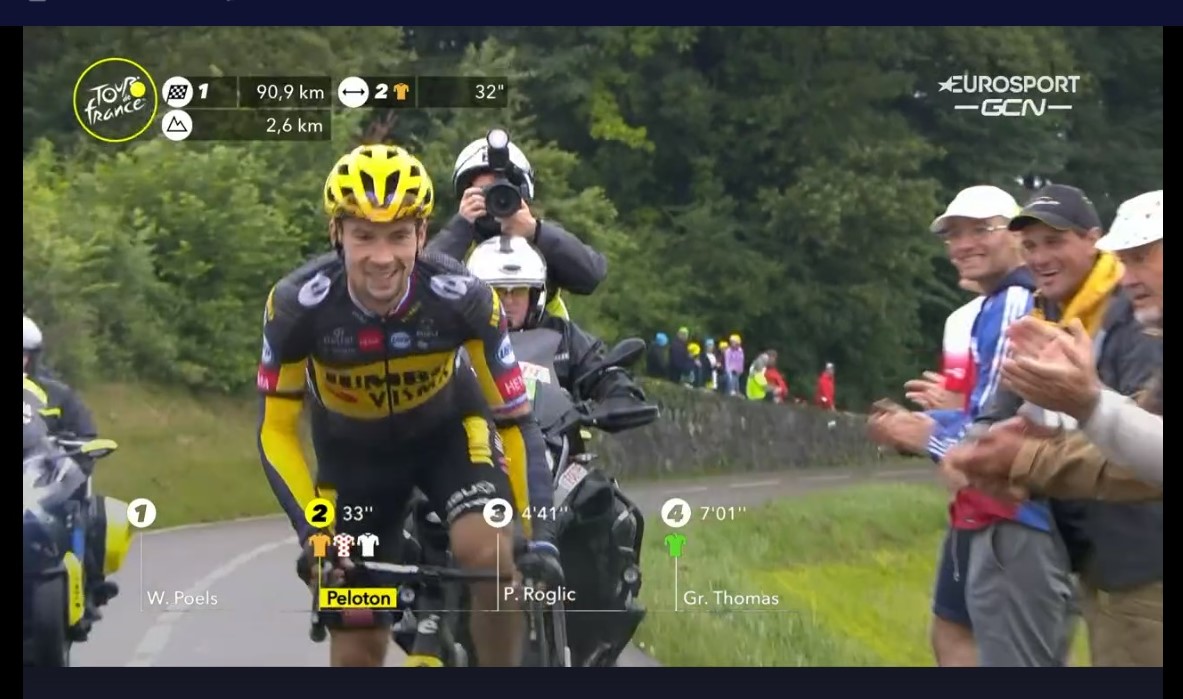 CyclistAbi said:
My prediction for the stage 8. Basically Roglič to survive.

Lets see if that was a reasonable expectation.
Click to expand...

Finally there is something to build upon!
D

Roglic should abandon the race and focus on the vuelta.
C

I had a feeling Pogačar will go for a kill ASAP. Could have had healthy Roglič done something about it on stage 8?

No word on social media of abandoning hence i guess lets get through tomorrow and then take a well deserved day off.
Reactions: Sandisfan

Maybe not follow, but certainly contain the gap "if" he had Vingegaard & Wout van Aert drill it behind for as long a possible. Yesterday was a bit of a joke for JV, with Vingegaard racing his own race with the GC group & Wout van Aert around a minute or so behind in the wind fighting for yellow. Both climbed well, but neither were fighting for the same goal.

It was a mess (& Wout van Aert blowing some energy early on in the stage attempting to get into a breakaway whilst Kuss sat doing nothing up ahead didn't help either).

As for "what" does Roglic do now, clearly he's aiming to recover & salvage something for his team, which would be a stage win week 3. In theory it could even make sense "if" he uses stages like training rides (as he did yesterday). It's not like riding the Tour de France in the gruppetto (& then targeting one stage) is going to drain his energy for the rest of the season.

Or he could withdraw today or tomorrow, but I can see the logic in staying insofar as the injuries permit it.
Y

I suspect that Jumbo will have Roglic target the Giro in 2021 - Doubt they'll go the well again.

Good decision. He can now rest/heal and get ready for the Olympics/Vuelta...
Reactions: Sandisfan, Carols and JosefK

Really hope that he can leave Tokyo with at least a medal.
Reactions: Sandisfan and Carols

KZD said:
Really hope that he can leave Tokyo with at least a medal.
Click to expand...

At the danger of sounding too pessimistic; seems like now the focus is on even getting him to Tokyo.


yaco said:
I suspect that Jumbo will have Roglic target the Giro in 2021 - Doubt they'll go the well again.
Click to expand...

Bit late for that, don't you think?

RedheadDane said:
At the danger of sounding too pessimistic; seems like now the focus is on even getting him to Tokyo.
Click to expand...

Yup, definitely a battle against the clock.

First heal injuries. Then be able to line-up in good condition. About 3 weeks until Olympics start. 24 days until the ITT.

Anyway, the biggest missed chance was the 2019 Tour.
Reactions: JosefK

He could just as well have won last year, who knows how strong he was when he started this year's edition. But 2019 would have been easier to win, agreed. If he after Romandie had rested until the Tour and brought his Vuelta legs there, he would 'just' have to avoid mishaps.
Reactions: Lui98, JosefK and Red Rick
T

Good call to drop out. Was a bit pointless for him to ride on. Hopefully he can get well for the Olympics, and then go for Vuelta and Lombardia. Maybe TT at the WC too.
Reactions: Sandisfan

No word on social media of abandoning hence i guess lets get through tomorrow and then take a well deserved day off.
Click to expand...

I doubt Rogla performance wise yesterday but i‘d argue the whole race would have turned out differently if he was in it.
Roglic would have been harder to drop than Carapaz and could feasibly made it to the top of the Col de Romme with Pogacar and i doubt Pogacar would continue to drive the pace like he did if Roglic is on his wheel. Tactics would come
Reactions: Sandisfan and VayaVayaVaya

Rest and heal Primoz. I look forward to your future exploits!
Reactions: Sandisfan

I hope he can win the Vuelta, then he'll really be the new Rominger (in reference to the former thread title) who had almost the same GT record from 92-94
C

That smile he gave to the camera on stage 8. That was likely he saying goodbye to TDF 2021. Good decision to abandon the race considering he is injured and an approach where you ride TDF, to heal, well no doctor i ever heard of prescribed that. He basically rode 5 more stages after the crash on stage 3. Did a decent TT. That is some serious determination. Now i see he is already in the arms of his family, social media. Body was crushed but i feel that soul is still in the right place. Body will heal and new goals will come. Rather soonish.

We more or less knew TDF 2021 would be a two horse race. To bad they injured one at the beginning of it. Still i would say this isn't such a blow as TDF 2020. Olympics and another GT race basically a month away. If he does Vuelta i worry a bit about the team support. As likely it will be lacking. But OK.

Personally i am rather pleased with his decision as i now don't have to watch TDF to the extent i would if Roglič would still be participating. As i didn't really enjoy it all that much anymore. In addition i don't care all that much about TDF 2022. That is like ages away. Each race Roglič will participate in from now on is OK by me. In addition Tour is now a race that is just too associated with injures. No point in betting it all on Tour. It's a race. Just as any other and best to treat it like that. And honestly i feel that now Tour needs Roglič more than Roglič needs Tour.

Anyway, lets get to the Olympics first and lets do that first!
Reactions: Carols, Sandisfan and mangart
B

johnymax said:
I've had this thread in my mind for awhile now. I've just been waiting for his first successful race/stage. 3rd place in a stage in Algarve isn't exactly what you'd call a big success, but with a bad shoulder (he dislocated it at TDU) it's a very nice result and a sign of good things to come.

This is a learning year for this young man. He is 26 but has the experience of a neo pro. Believe it or not, he bought his first bicycle in 2012. He is extremely talented and there's no doubt in my mind he can achieve some important results in the future. In a year or two I can see him fighting for a Giro podium. This year he is going to be a climbing domestic for Kruijswijk in the GIro.

I compared him to Landa because he can be this year's climbing sensation although in my opinion he won't reach the climbing level of Landa but he can become a better allrounder.

I can't wait to follow his improvement and his racing over the years. Discuss...
Click to expand...

I am a wee bit late, but I just wanted to say you called it mate!
Reactions: johnymax

good decision and I'm hoping for a medal in Tokyo and his 3rd Vuelta some weeks later.

I find him a really likeable guy.

unfortunately, time isn't on his side.
Reactions: Carols and Sandisfan
B

I’m not sure how many good chances Primož will have to win the tour but I sincerely hope he gets those chances. He deserves a TDF. Last year his team underestimated Pogačar. This year he abandons. Obviously no shame in either case. He’ll be 32 in November. What will his chances be like next season? I’d say decent. I think the danger is the third week, and if someone like Pogačar attacks a long way out in at least one stage. I don’t know if any of the other riders left in the race would have been better than him had he not had that crash, maybe they would have, maybe the Bad weather would have impacted him. Who knows.

If he can get a third straight Vuelta title, then next season he needs to be all in for the Tour. Pogačar will likely not weaken if he stays healthy and motivated and I’m sure other teams wit GV ambitions like Ineos, Movistar, Bahrain, etc will go hard as well. If he wants a tour title he he better get it soon. I am also curious if he’ll want to go back to the Giro, especially if he wins the Tour to try and have all three GT’s? Tackling two GT’s may become difficult in his age, even with a late start in cycling.
You must log in or register to reply here.
Share:
Facebook Twitter Reddit Tumblr WhatsApp Email Link