Page 12 - Get up to date with the latest news, scores & standings from the Cycling News Community.
Sidebar Sidebar
Previous Next
E

Hopefully the victory will give Eenkhoorn some confidence after his sleeping pill incident.

The exact same thing happened last year. Craddock should have this sewn up.


Squire said:
The exact same thing happened last year. Craddock should have this sewn up.
Click to expand...

He should, but it's EF. They can easily screw this up already this afternoon.

Yes the mighty Lawson Craddock should have this locked up.

EF lose 20 seconds and Lotto NLM Jumbo lost 11 seconds - Craddock should hold on for the win.

Where's this faith in Craddock coming from? One 15 minute effort in Abu Dhabi?


Geraint Too Fast said:
Where's this faith in Craddock coming from? One 15 minute effort in Abu Dhabi?
Click to expand...

Everybody says he should win, not that he will.
It all depends on if he's back to his 'normal' level.

Excellent result for the Belgian Jasper Philipsen. 20 year, neo, and fast as hell. He beat Jakobsen a couple of times in U23

Bouwman was in winning position with 2km but had a very nasty fall. He finished as 6th still but had to be taken to the hospital after the finish.

edit: and Mollema was bad in Paris Nice because of a bacterial infection it turns out. He's now recovered. 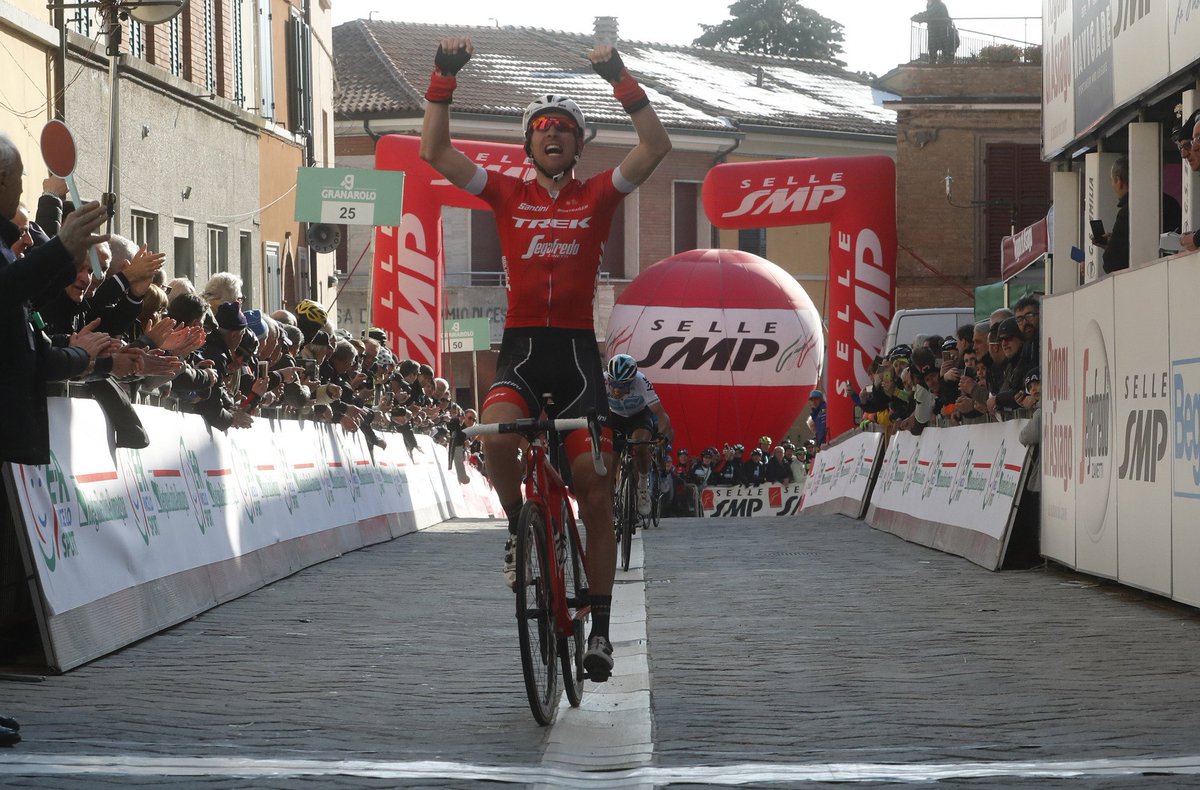 They gave a 2s gap


LaFlorecita said:
They gave a 2s gap
Click to expand...

edit: I was looking at the result posted above. It has been corrected to 2s in the official result later on. You'll understand my confusion when I only look at this board

Why must Ciccone ride for Bardiani. Finishes 3rd in the stage but is 50 seconds down in the gc because of the TTT. 50 seconds in a 13 km TTT! 50 freakin seconds
Z

Another nice day for Trek.

Craddock was apparently part of the big leading group but had a mechanical at some point? Am I misinformed?
E

https://www.youtube.com/watch?v=08xiaXmjw3U
the racing was very good there , androni smashing the other italian proconti teams. Mollema will probably win the thing
W

Nice finish for Powless. He has been good in time trial as junior. interesting to see if he can move up into top five.
W


GenericBoonenFan said:
Craddock was apparently part of the big leading group but had a mechanical at some point? Am I misinformed?
Click to expand...

He was distanced and then crashed. Not sure if it would have made difference in keeping jersey but definitely would have been closer than he is now.

Definitely a lesser known race this week, and apparently an extraordinary one, was the first edition of the Tour of Tunisia's Central Pharmacy (I may have been over literal with the translation, which makes it sound like they did loops of the cough remedies aisle in a city centre branch of Boots). I know nothing beyond the results on PCS and notes on CQ, but they are worth recounting.

Stage 1 might have had as few as 39 starters. The front group at the end was 17 strong, with Dan Craven at 34 seconds, then a lone rider at 3 minutes, 7 men at 12 minutes, 7 at 18 minutes, and 5 more at 40 minutes. Poor Anis Bchni rolled in 3/4 of an hour later, 1 hour 25 minutes after the winner, but was not surprisingly outside the time limit.

On Stage 2, only 15 of the 38 finished, and only the last 2 of these were given the same time as each other (last of all was Reguigui, winner of stage 1). 4th place was at nearly 4 minutes, only 3 more were within 15 minutes, and the last 5 between 25 minutes (nearly) and 28 minutes behind the winner, Gaetan Bille.

This race initially counted 4 stages. The 2nd stage was held in heavy rain and temperatures close to zero, and only 15 riders reached the finish.
Considering the extreme conditions the jury decided to cancel the results and let everybody start again for the 3rd stage. As the next day the weather was still the same, the 3rd stage was cancelled altogether.
The jury then decided to reinstate the results of stage 2 and consider the GC after stage 2 as the Final GC.
Stage 4 was changed into a 1.2 race with all stage race riders allowed to participate: the GP de la Pharmacie Centrale de Tunisie.
Click to expand...

The unplanned 1.2 race was won by the splendidly named Gruffudd Lewis. Stephane Poulhies managed the coincidental feat of being third in both stages and the GC of the abridged race, and in the bonus one day race.

Excellent result for the Belgian Jasper Philipsen. 20 year, neo, and fast as hell. He beat Jakobsen a couple of times in U23
Click to expand...

I'm not really into the U23 but as what I heard was they're not the same type as sprinter?

Excellent result for the Belgian Jasper Philipsen. 20 year, neo, and fast as hell. He beat Jakobsen a couple of times in U23
Click to expand...

I'm not really into the U23 but as what I heard was they're not the same type as sprinter?
Click to expand...

They're not. Jakobsen is a pure sprinter, Philipsen is a classics guy with a fast finish.
D